The Oakland Athletics got a great start to their first road trip of the 2014 season, taking five of six games against the Twins and the Mariners. However, the nine-game trip isn't over yet, as the A's begin this week with a series against the Angels in Anaheim. The A's enter the three-game set with an 8-4 record, putting them atop not only the AL West but the entire American League. They also have the best run differential in the AL. The rotation is rolling and the sluggers have started slugging, so everything is going about as well as it can for the green and gold right now. Considering that they are in a long stretch of contests against divisional opponents (the next 16 games are against the Angels, Astros and Rangers), this is a great time to be hot.

Oakland will get a look at both of the Angels' new starting pitchers, Santiago and Skaggs. They are each left-handed, so expect to see a lot of Derek Norris, Nick Punto, Alberto Callaspo, and Craig Gentry (and likely some Daric Barton). Meanwhile, the Angels will get their first look at the new-and-improved Chavez, who is looking to continue his hot start to the season. Straily has made three career starts at Angel Stadium, and they have resulted in a 2.66 ERA in 20⅓ innings with 17 strikeouts to just three walks. Mark Trumbo will not hit any monster home runs in this series because he is no longer on the Angels.

1. The Angels seemed to have a successful offseason, dealing from a position of strength and depth (outfield) to fill other positions of need (rotation, bullpen, third base). How do you like the new additions, and do you think that the team did enough to plug the holes from the 2013 roster?

JG: Jerry Dipoto batted .500 with his deals this offseason. I like how he turned Mark Trumbo into two solid rotation pieces, but then he swung and missed on dealing Peter Bourjos and under-appreciated Randal Grichuk for shiny object David Freese and Fernando Salas. Many fans, including me, thought Bourjos was worth more than Freese, but apparently that was the best Dipoto could do. If that were the case, he should have kept the speedy outfielder and dealt him at the deadline, if at all. What surprised me the most this offseason was the move not made by the Angels' front office. There were a number of cheap, and admittedly somewhat underwhelming, starters available that a team will eventually need throughout the season. The current Angels' rotation is fine, but what's going to happen if one or more end up injured? Is Wade LeBlanc the answer to anyone's question other than, "Who's the worst pitcher in the Angels' minor leagues?" The passing on guys like Chris Capuano or Scott Baker is puzzling.

2. The Angels have unquestionably the best player in MLB in Mike Trout. What are your thoughts on the six-year, $144 million extension that he signed this winter? Is it good for him, good for the team, or both?

JG: The signing is great for both Trout and the Angels. Trout gets the security that 144,000,000 crisp dollar bills provide, plus another opportunity to cash in again before he's 30 years old, while the Angels get to keep him around for at least an additional three years. Trout is going to break a few records before he's done, and one is going to be the highest salary.

3. Josh Hamilton was off to a monster start (.444/.545/.741), but he is expected to miss 6-8 weeks after tearing a ligament in his thumb on Tuesday. Will he pick up where he left off when he returns from the DL, or are his 2013 numbers representative of his true talent level now?

JG: I don't think even Josh Hamilton knows what to expect when he comes back. Heck, the Angels have gone 3-1 since he's been out (yeah, I know, they beat Houston and the Mets, big deal), but I suppose it's possible he figured something out this spring -- a new toe-tap, no toe-tap, or whatever. Maybe he can continue to be the Josh Hamilton we all hoped he'd be when Arte Moreno signed him. 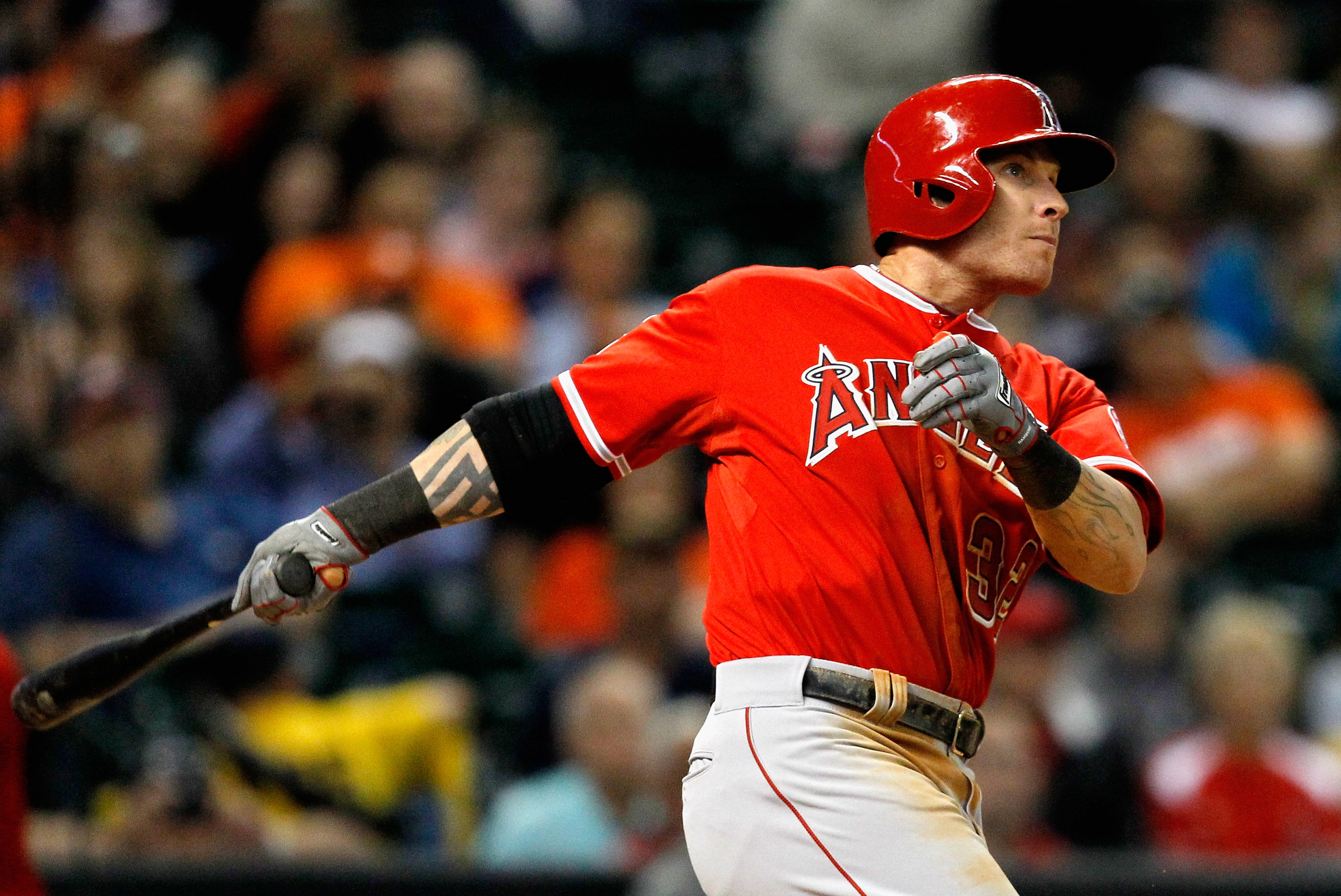 Josh Hamilton was in the midst of breaking out, but then he broke down instead.

4. What does the starting outfield look like without Hamilton? Will there be any significant playing time for former Oakland fan favorite Collin Cowgill?

JG: The Halos called up J.B. Shuck to take Hamilton's spot on the roster. The word is he's going to be the left-handed side of a platoon with Reverse Cowgill. Shuck's nothing spectacular, but I think the SABR sorts sell him a little short as he not going to hurt the club while he's on the field. For some reason I think Shuck would make the perfect Oakland A's player; a somewhat no-name player who "knows how to win". Yeah, I just said that (take that, baseball nerds!). But seriously, Shuck/Cowgill aren't the worst short-term fill-ins in left field.

5. What are your thoughts on Grant Green, the former first-round pick acquired from Oakland for Alberto Callaspo last summer? Is he a part of the Angels' plans moving forward, or is his best-case scenario landing a spot on the bench at some point?

JG: I think I sent Jerry Dipoto flowers after he traded away Callaspo and stole acquired Grant Green. I thought he'd be the Angels everyday third baseman in 2014, or possibly be their second baseman if Howie Kendrick were dealt during the off season, but the club feels he's better off in Triple-A getting daily at-bats. I still feel he's more the answer at third than David Freese will ever be, and that still causes me to lose sleep over the aforementioned Bourjos trade. One of my questions to Alex in this Q & A was what's wrong with Green that made Billy Beane deal him? I think Beane's a wizard, what does he know that we don't?

6. Jered Weaver missed time in 2013, and his average fastball velocity has gone down the last five years: 89.9 mph (2010), down to 89.1 ('11), to 87.8 ('12), to 86.5 ('13), and now to 85.9 so far in '14 (though this year's mark should be taken with a grain of salt since velocities tend to start lower earlier in the season). He's also given up four home runs already in 12 innings (though all four came in one start in Houston's bandbox stadium ... which also means they were all hit by Astros). Is there something wrong? Or are these all just early-season blips, and you expect him to settle down and post his customary excellent season?

Of Maicer and Men •Halos Heaven

JG: The time he missed last season was because of a broken bone in his non-throwing arm, so that shouldn't have affected his velocity, but yeah, you're right about it declining. His success was never really reliant on how hard he threw; he's a control pitcher who uses deception to get strikeouts and his defense to catch the balls that are hit. In his Saturday night, he left the game with a 3-2 lead, giving up just three hits, but Fernando Salas coughed up a long single that allowed two inherited runners to score. Had Salas done his job, Weaver's line wouldn't have looked too bad. With that said, I am a little worried. It's been six years since he's given up 4 home runs in a game, and he's missing the strike zone 9.3 percent of the time -- that's almost 50 percent more than normal. So, yeah, hopefully this is just an early-season blip, but don't be surprised if he ends the season as the Angels' third-best pitcher.

7. For some reason, I've been really high on Garrett Richards all winter. Can't explain it, just a hunch. Is that warranted, or have we pretty much seen who he is already -- an average-at-best No. 3/4 starter?

JG: Trust your hunches, Richards is the real deal. He's throwing his fastball a little faster, while mixing in an improved curve more frequently. The result is a slightly better (reduced) contact rate, and, when batters do make contact, they're not hitting it as hard. He's not Cy Young caliber...yet.

8. Which number will be higher at the end of the season: Raul Ibanez's age (42), or his number of extra-base hits?

JG: When the Angels signed Ibanez, my eyeballs almost fell out from rolling so hard, but then I looked into it a bit. I've now come to terms with a 42 year-old DH. I think he has one more year where he'll outpace his age, unless Mike Scioscia does the stupid things he sometimes does by putting Ibanez in the outfield. If we see him on the field without a bat in his hands, he's more likely to break a hip than break 10 home runs.

The series starts tonight. First pitch is scheduled for 7 p.m. sharp, Chavez vs. Santiago. Craig Gentry should get his first start as an Athletic tonight, in center field. The A's won't play the Angels again after this until the end of May.