Share All sharing options for: Game Thread #13: A's at Angels

Now are A's in Anaheim to taking on Angels. With Jesse Chavez opposing by LHP Hector Santiago! {Man, writing on a deadline is harder than I thought.}

The A's enter play tonight 8-4 and while that's not perfect it sets the standard in the American League. The Angels have started 6-6 and while that's not perfect it's not the woeful start that has derailed the team each of the last two seasons. Oakland misses Jered Weaver and C.J. Wilson in this series, getting the back 3 in LAA's rotation: Hector Santiago, Garrett Richards, and Tyler Skaggs. Two are LHPs, so Craig Gentry and Alberto Callaspo will get ample time in the lineup.

Chavez is coming off a stellar start at Minnesota. Meanwhile, Santiago has struggled with his new team and enters tonight's start 0-2 with a 7.71 ERA. Still compromised by the cortisone shot in his left elbow last week, Coco Crisp is not available to bat right-handed and so he is not in tonight's starting lineup -- which are thusly and as follows:

And finally, a blobfish. 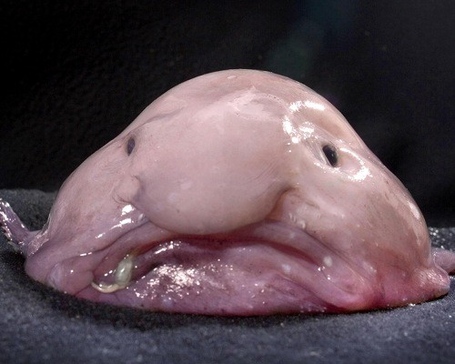