The Athletics beat the Mariners behind a two-run second-deck home run from Josh Donaldson in the first inning and seven strong innings from Sonny Gray. And closer-by-committee works! 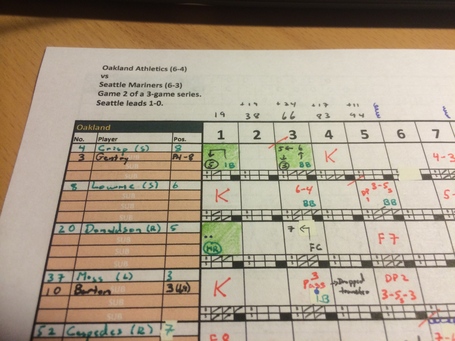 Josh Donaldson got the scoring going right away with a towering first inning home run that ended up in the second deck of the left field stands at Safeco Field.

In the third, with Coco Crisp at third and Donaldson at first, Brandon Moss hit a fly ball into the left field gap which appeared caught by Ackley until he attempted a transfer. However, Ackley dropped the ball and the ball was declared in play. Unfortunately, Donaldson ran back to first while Moss was making his turn around the bag. Moss passed Donaldson and was declared out on an RBI single. The ball was deep enough for Crisp to score regardless, but the play demonstrated just how silly this new interpretation of the catch rule is. It confuses runners and goes against every instinct of both players and fans of the game. Anybody watching the play feels that Moss was out and did not merit being credited with a single. Yet here we are.

Mariners starting pitcher Erasmo Ramirez could not put away batters tonight, getting eleven batters to two strike counts, but striking out only three. The A's did well to get a lead-off man aboard in each of Ramirez's five innings, but only two of those scored, leaving the game tight throughout.

In the sixth and seventh, the Mariners called on Dominic Leone. Leone took 44 pitches to get through eight batters as the Mariners continued to struggle with getting that third strike. Five Athletics faced two-strike counts against Leone, and only Donaldson struck out. 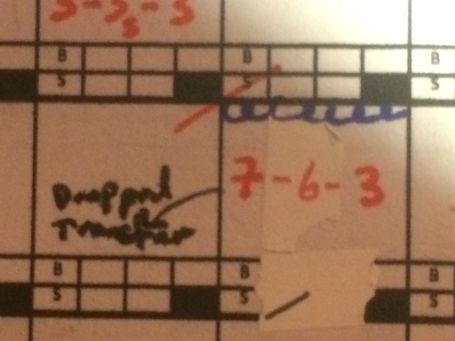 In the sixth, Yoenis Cespedes appeared to line out to Dustin Ackley, except Ackley flat out never secured the ball and let it drop behind him. Cespedes, however, only saw a routine line drive right at Ackley and failed to run out the ball. Not watching, he abandoned his run. First base coach Tye Waller, instead of yelling at Cespedes to run out the ball, instead turned back to the dugout to see if they intended to challenge the play.  As a result, instead of their sixth straight lead-off hitter getting aboard, Cespedes was out 7-6-3. 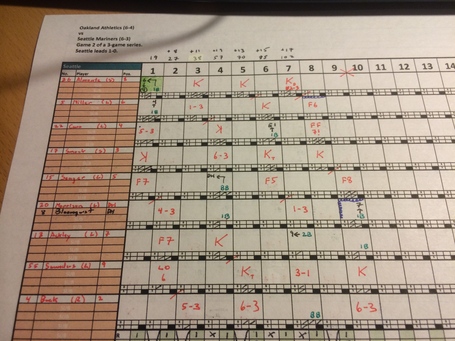 Fortunately, Athletics starter Sonny Gray performed brilliantly in seven solid innings. After giving up two singles to start off the game, Gray retired Robinson Cano on an RBI groundout and then retired ten straight batters after that. In seven innings, Gray struck out eight nine batters, walking only two.

Gray put on his Houdini act with some help from his trusted right field assistant Josh Reddick in the fourth inning. Reddick made a good defensive play on a Logan Morrison single down the right field line that, but for Reddick's strong arm, would have allowed Kyle Seager to score from first. Gray then got Dustin Ackley to strike out to end the inning.

In the seventh, Gray gave up a one-out double to Ackley, and Michael Saunders moved Ackley up to third on a productive ground ball out. After John Buck walked, with his pitch count hovering around 100, Gray struck out Abraham Almonte for a third time, securing his quality start.

The A's called on Sean Doolittle to face the lefty-heavy Seattle lineup in the eighth. He mowed down Brad Miller, Robinson Cano, and Justin Smoak in nine pitches.

With two out In the top of the ninth, leading 3-1, Craig Gentry, replacing Sam Fuld on the active roster, made his A's debut pinch hitting for Coco Crisp. He ultimately flew out to right field and remained in the game at center field for the bottom of the ninth.

The A's began their closer-by-committee by leaving Doolittle in to face Kyle Seager leading off the ninth. Seager flew out to Craig Genry, and as soon as Willie Bloomquist was announced to pinch hit for Logan Morrison, Bob Melvin turned to Luke Gregerson. Gregerson gave up two straight singles before striking out Michael Saunders and getting John Buck to ground out to Jed Lowrie to end the game. Gregerson gets the save for entering the game with the tying run on deck, but we all know that saves don't matter, and Sonny Gray earns his second win and goes 3-for-3 on quality starts in 2014.  His ERA moves from 0.75 to 0.95 (oh no!).

Tomorrow, Scott Kazmir pitches for the A's against Chris R. Young of the Mariners in the rubber match of the series at 1:10pm Pacific Time. Nico will have your thread.