How can Cespedes reach elite hitting status? Let's find out.

Last time, we did an analysis of how pitchers pitch Cespedes and examined his tendencies. To recap, we saw that pitchers pitch Cespedes heavily down and away, Cespedes swings at a lot of pitches down out of the strike zone, Cespedes struggled with the increased number of fastballs he saw in 2013 - especially up in the zone, and finally Cespedes really, really struggled with curveballs in 2013. So in this article I will go over what tweaks I would make to Cepedes if I were tasked helping him.

Now, before we get too into this I will issue a disclaimer. As I have stated many times, swing mechanics are just one piece of becoming a good hitter. Some swing problems are fatal. Some are minor. Some can be overcome by athleticism. Cespedes has athleticism to spare so it is entirely possible that he will have a fine year with the swing issues I will point out. However, I firmly believe there is room for improvement and equipped with a better swing Cespedes could really, really be something special. So let's proceed.

Where to start? Oh, how about the hot topic this spring - the length of his swing. I don't know how everyone defines swing length, but I will explain how I do. Basically I examine where the bat is when the front foot is starting to touch the ground - about two frames from heel plant. We have seen before that the front foot planting is basically the starting timer of the swing, so it is a good place to start measuring length as well. The rule of thumb is you want the knob to be pointing behind you and to the area of the catcher's feet. Kinda like these guys.

Ok. His swing is a lot longer. Is it too long? Probably. But he is able to come in at 5 frames, so it isn't hurting his swing time. But obviously having a shorter path will make it a little easier to make consistent contact. Still, Cespedes' swing was long as all-get-out in 2012 and he hit just fine. Would I like to see him chop a little off? Yes. I would like to see him turn his right forearm toward the catcher (supinate) to bring the bat over his head instead of the lead shoulder. But enough with the shortening swing thing. That's boring and it is pretty obvious Cespedes isn't going to do it. Let's move on to something else.

Like his front leg. If you have been reading my stuff, you know since last July I have been going on and on about Cespedes' front leg function (here and here and here). Basically - for reasons unknown - Cespedes went to a significantly more pronounced inward turn of his front leg in 2013. Too much in my opinion. You can see in the GIF above the exaggerated inward rotation of the front leg.

Here is how the front leg issue really hurts Cepedes. We saw last week that pitchers really pitch Cespedes down and a way. Cespedes' lagging front leg prevents his hips from clearing and allowing him to gain lateral bend needed to cover the plate. Take a look at contact on Cespedes' triple from last week. On the pitch down and away, he hasn't gotten his hips around and hasn't adjusted his lateral bend. He is basically swinging with all arms. 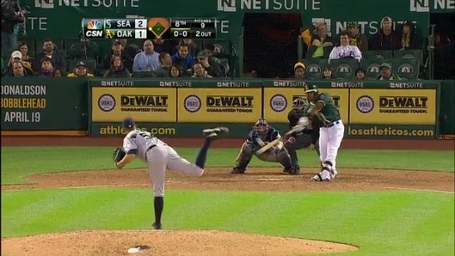 Now Cespedes is so strong that with just his arms he can hit the ball to the fence. But I worry that as the season goes along and he gets more banged up from the travel and playing every day that might not be the case. Take a look at Moss at contact on the low and outside pitch on his first home run of the season. See how he clears the front side allowing him to go down and stay with the pitch instead of just using his arms. (For more on covering the plate, read this article).

Here are couple more contact frames to show my point. If he is going to swing at pitches down, he might as well put a good swing on them.

I would like to see Cespedes clear the front side so he can stay with the pitches down and really do some damage. We also saw Cespedes was really down on fastballs from 2012. Again, this is related to the front leg function. If the front side doesn't clear fast enough, well... you don't have to be a swing nerd like me to guess that is going to make it harder to catch up to fastballs. Here is a comparison of Cespedes to Donaldson at front foot plant. See how Donaldson is starting to clear the front leg. We can see his rear knee. Not the case with Cespedes. He simply has so far to go in a short time to catch up with the fastball. Combine the lagging front leg with a long swing path and you have a recipe for struggles against fastballs.

One more thing while I have you here. In my first article on Cespedes' swing, I briefly touched on how Cespedes starts his swing. I described the movement as "casting" because it is similar to a golfer coming over the top. Here are the frames I am talking about.

If you have read this article on front side mechanics, you know that typically hitters have the front shoulder take the slack out of the front arm to get the swing going. Cespedes certainly doesn't do that. Cespedes gets his swing going by driving the bat straight down and around with his rear arm. I gotta say this is unique. I can't think of an All-Star caliber player who has worse front side mechanics than Cespedes. Here is why this hurts Cespedes. Think of the front and rear side like two hands on a steering wheel. They provide force on opposite sides to turn the body and produce force tangential to the circle. See below. 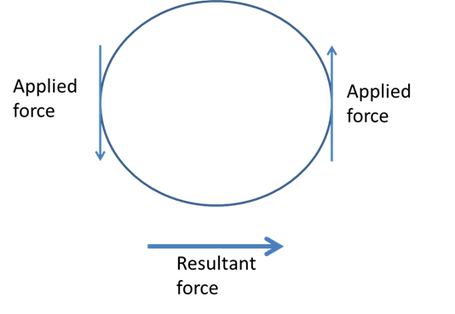 Now if the front side doesn't do its job and pull the bat up, the bat path is directed downward. So on the high fastballs Cespedes sees, he has going to have a difficult time. There isn't force available if he needs to get the bat going on a more upward plane. He simply can't get the bat to the high fastball. We see why Cespedes has the 5th most infield flyballs (51) since 2012 and why Cespedes wanted low pitches in the Home Run Derby. 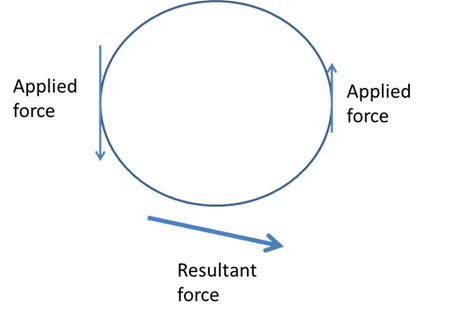 Take a look at these frames of when hitters get the bat vertical to the ground. See how everyone else has much more shoulder rotation by the time the bat gets vertical. And Cespedes started with the bat more horizontal! It is amazing this guy is able to get the bat around.

I hope I did a decent job of pulling this all together of how pitchers handle Cespedes and the adjustments I would like to see Cespedes make. Cespedes' swing has always been a little unique in a few senses, but combined with his freakish athletic ability was a very successful hitter in 2012. In 2013 Cespedes changed his swing for the worse and pitchers started pitching him differently. I would like to see him make some adjustments to produce at an elite level.