Even if it's spring training, when your team loses because a lazy fly ball is lost in the sun and wind, you pretty much need a cartoon, pronto. So we'll begin with our weekly funny. 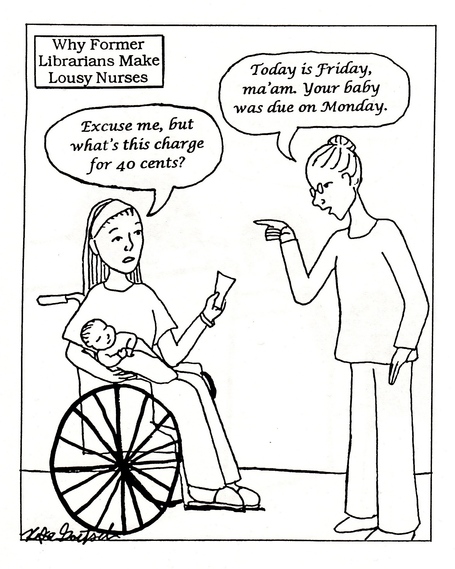 Well that was certainly droll. I hope LibrariAN sees and enjoys it.

What's not so amusing, if you're a minor league baseball player, is that while big leaguers are making anywhere from $500,000 to $30,000,000 annually you are working for so little pay that when you do the actual calculations it comes out to less than minimum wage. Plus you're required to commit to additional training, and participation in instructional leagues, for which you are not paid at all.

3 minor league players are arguing that it's not only not funny and not only unethical, but in fact illegal -- they have sued MLB and the 3 teams they toiled for, in an action I don't think has garnered as much attention as it should. It should be getting more attention partly because I think these plaintiffs actually have a chance to win, partly because Bud Selig won't have the luxury of ignoring it for 5 years, and partly because this issue needs to be talked about.

The issue is the ridiculous disparity between selected major league players (the "1%") and thousands upon thousands of minor league players (the "99%"). It happens because MLB has a powerful and active union that works to protect Josh Hamilton's right to make more than he can inject, while the minor leaguers have no lobby. The best way to gain power is to already have it.

What would I like to see? How about something like a 10% tax on all annual salary above $10M, put in a fund that was dispersed throughout the minor leagues. Clayton Kershaw, with his new $30M/year deal, would throw $2M/year into the coffer, while Scott Kazmir would wind up contributing about $100,000 each of the next 2 seasons. Largely accrued from a handful of insanely wealthy players (Kershaw $2M, A-Rod's $1.75M, Hamilton's $1.5M, Pujols' $1.4M, and so on), a pot of around $10M would be generated to distribute to the 3,000-4,000 professional baseball players who are currently making a pittance. This would roughly double the salaries for the lowest paid minor leaguers and would increase the highest paid salaries by about 33%.

It would be a start and it would at least be, in my opinion, the right message to send. Now you can quibble about whether a tax of 20% on salary over $5M, or 5% on salary over $15M, would be more appropriate. To me it's the concept that's important, and the precise numbers would be for people who aren't me to hammer out. The point is that when the vast majority of your professional players are being paid at -- or, these plaintiffs are arguing, well below -- the poverty level, and a select few are making far, far more than all the minor league players combined, there's a problem. And as far as 3 formerly unknown athletes are concerned, it's a problem that MLB no longer has the right to ignore.

I was clearly not thinking clearly when I wrote last night (10 days of relentless ear-nose-throat congestion will do this, grrrrr...). If "professional players" (major and minor league) were united as a group against "owners," they would not take from themselves to give to themselves, while the owners got a free ride -- the "players group" would be representing the Kershaws along with the "unknown single-A players".

So the way a model like the one I suggested could work is only if the owners matched the tax -- which is kind a cool idea (I think). Kershaw is taxed $2M and from the owners' kitty $2M goes, doubling the pot for MiLB. This would then roughly triple the lowest salaries, and increase the highest ones by about 67%.