The right-hander, originally drafted by the A's, had a 6.04 ERA last year for the Angels.

Well, the Oakland Athletics have officially filled the Colon-sized hole in their pitching staff. I don't mean that they replaced Colon's on-field production, I mean they literally added a pitcher nearly as large as Colon, so now our fat jokes can seamlessly transition from him to ... Joe Blanton? The A's brought back Joe Blanton on a minor league deal? But ... why?

"Ponder the fact that the A's have signed onetime Oakland starter Joe Blanton - who struggled mightily with the Angels, with a 6.02 ERA last year - to a minor-league deal. The division rival Angels will continue to pay Blanton's $8.5 million salary, while the organization that developed Blanton into one of the better young starters of the ‘OOs gets a crack at fixing him. And yes, Blanton was part of the famous "Moneyball" draft and he still lives in the Bay Area. So it all comes full circle."

Honestly, I don't think I could have done a better job of spinning this as a positive if I'd had insider information that Blanton had connections to bring Kinder's back to the Coliseum concessions. (Note: As far as I know, he does not.) Things to like:

- Pitching depth is always a good thing.
- Blanton used to be good, and it happened here. There is talent hidden there, somewhere.
- The Angels are paying him a ton of money. Can you imagine if he won a start against them this year, while on their payroll? That's some 2002 David Justice shit right there.
- He lives in the Bay Area? Kind of irrelevant, but now I like him even more.

And the downside? He flames out of the Triple-A rotation and never reaches the majors. Sounds like a no-risk move, even if it is also low-reward. Low reward is better than no reward, which is also known as Philip Humber.

If you really squint (like, practically close your eyes), you can see signs for optimism in Blanton's 2013 stats. He threw 132⅔ innings, and he pieced together a very strong 3.18 strikeout-to-walk ratio. Unfortunately, he also gave up 12 hits and two home runs per nine innings, so the possibility exists that he may be a case of a pitcher who is worse than his fielding-independent numbers (sort of the anti-Matt Cain). He is 33 years old this season and his velocity last year was exactly where it's always been, so he seems fine physically. He will open the season in Sacramento's rotation, and assistant general manager David Forst says that he "will have every opportunity to get back on track." I never had anything against Blanton, so, what the hell? I'm down to take a flyer on him.

Now, SuSlu and I are pretty good about being optimistic. However, Mother Nature is more of an old-school fan, and she saw his 2-14 record and 6.04 ERA and freaked the hell out. No sooner had Blanton's signing been announced than the sky opened up and began weeping. Joe Blanton is so bad that he makes Mother Nature cry. This is serious, folks. 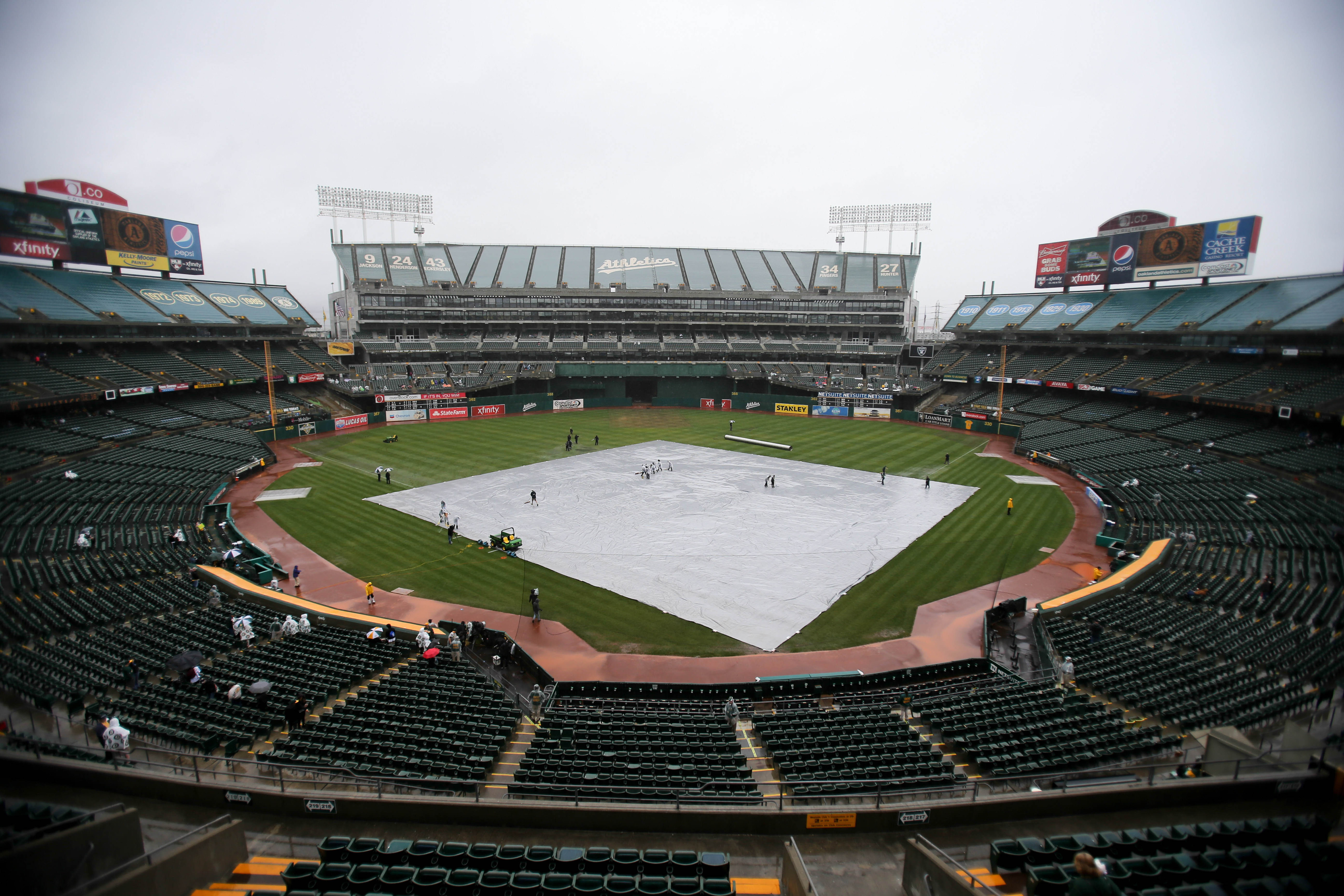 What does this rain mean for the status of tonight's season opener against the Cleveland Indians? Unfortunately, no one can really say for sure at this point. All we know is that it is currently raining and will continue to do so for an indefinite amount of time. At some point, the sun will go down and it will get dark, but we were prepared for that and it will affect neither the rain nor the prospects for the game. The best-case scenario at this point seems to be that the start of the game will be delayed, but that the contest will eventually be played tonight. The worst-case is that the game is cancelled and can't be made up this week. Somewhere in the middle of those two extremes, we open the season tomorrow with a Tuesday doubleheader. That would legitimately be fun.

But wait! I'm a man of science. There may be another possible explanation for this rain besides just Mother Nature's emotions. Many moons ago, the baseball gods decreed that the A's must open their season against Felix Hernandez every single year (citation needed). Oakland complied for four years, but enough was enough and they were scheduled to face someone else this year. Well, it's no secret that the baseball gods are vengeful, spiteful deities, and they do not like being disobeyed.

My alternate explanation: The weather will stay horrible, and the A's first six games will be rained out. Then, Game No. 7 on Sunday against the Mariners and Felix will serve as their season opener, and the prophecy will be fulfilled for another cycle. Call it far-fetched, call it a conspiracy theory, call it Susan if it makes you happy. But it's almost definitely true, and if you can find two meteorologists whose stories match up then maybe you can convince me that there is no divine tilt to this. I'll bet you can't, though.

So, hunker down, cross your fingers, and hope that we get baseball tonight. You could, I don't know, do your job for a couple hours, since we all know that you've just been watching Gamecasts and checking MLB Trade Rumors all day so far. You can admit it, this is a safe place. I'll have updates at the top of this post in the comments section as news of tonight's game comes in.

Apparently he is only the Bringer of Rain, not the Sender Away of Rain. Thanks for trying, though!