With the A's and Indians squaring off to open the season, I asked Jason Lukehart of Let's Go Tribe a few questions about his favorite team. Here's what he had to say!

It's Opening Day. Baseball starts today, weather permitting. We've been staring out the window all winter and there's finally going to be something to look at.

This season, I'll be running a Q&A with the blog of our upcoming opponent before every single series. What better way to get the local, inside scoop on the Other Guys? We begin today with Jason Lukehart of Let's Go Tribe, SB Nation's Indians blog. Without further ado, here are the goods:

1. The big story of the Indians' rotation is that they lost Ubaldo Jimenez and Scott Kazmir. However, this year's group seems like it has a lot to offer despite its relative lack of name-power. Are you happy with the rotation heading into the season, or do you see it as a weakness?

JL: I'm a lot less confident in the rotation than in the lineup, though the potential is there for them to do well. Justin Masterson is a step below the very best pitchers in baseball, but that's alright, most teams don't have a Clayton Kershaw. In theory though, the No. 2 and 3 starters are Danny Salazar and Corey Kluber. Those two both have the stuff to be plenty good, but they both also have a very limited track record at the Major League level. If they perform as well as they're capable, it should be an above-average unit. There's a little too much uncertainty for my liking though.

2. Speaking of Kazmir, what can A's fans expect from him, both on the field and off?

JL: Well, I didn't expect to get much of anything from him last season, but he managed to really surprise me, both by holding up well enough to make 29 starts and by showing better velocity than he'd had in years -- back almost to what he had in his prime. He pitched better and better as the season went on, seeming to turn a corner in late June, and doing especially well during the final 5 or 6 weeks of the season. It's worth taking that with a grain of salt though, because he had a relatively easy schedule of opponents in those starts, and he had an extra day or two's rest in at least half of those games, and went more than 6 innings just once in his final 11 games. I think he'll be a mixed bag, with some great outings, and some really bad ones. On the whole, I think he'll pitch like a No. 3 or 4 starter, while needing a little extra help from the bullpen.

3. What's up with Carlos Santana at third base? Is that happening, as in he will be the everyday starter there? Or is it something he will be eased into gradually?

JL: It's happening. He's also still the backup catcher, so he'll be behind the plate once or twice a week. I have to imagine Francona will want him to get some rest with the occasional days off and by playing DH sometimes, so it remains to be seen just how often he'll start at third base. But if his defense is tolerable, it appears he'll get the majority of the time there, something like 4 games a week. He's the team's best hitter, and expressed a desire to not be converted into a full-time DH, and he spent a lot of his offseason working at third base in the Dominican League. I have a ton of respect for how hard he's worked, so I'm glad he's being rewarded with some playing time there. I'd rather it were more of a platoon situation though (which leads nicely to the next question). (Editor's note: After this was written, the Indians signed former Athletic George Kottaras, who will presumably serve as a backup catcher behind Yan Gomes and push Santana to the hot corner permanently.) 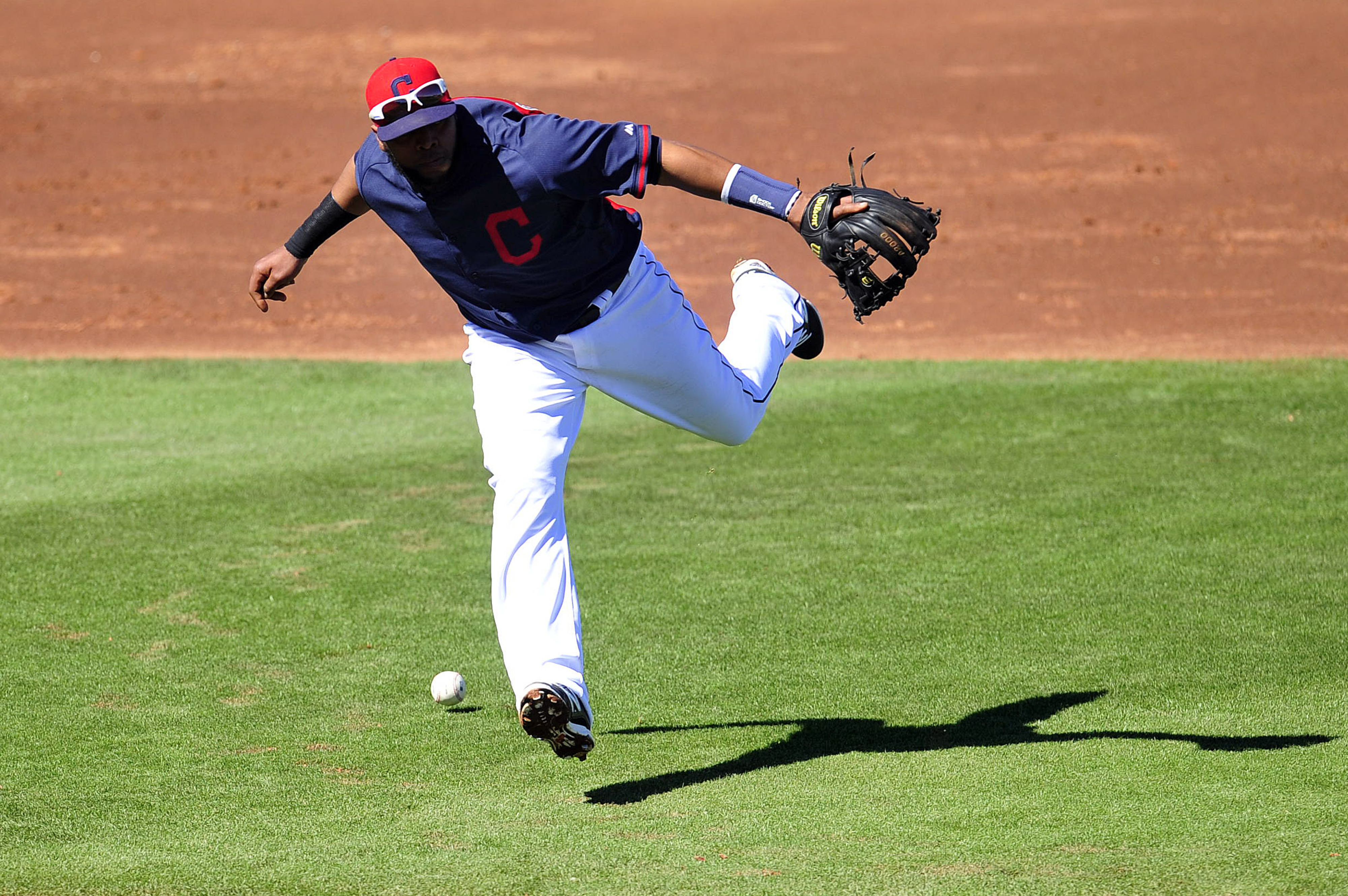 Pictured: A work-in-progress on defense.

JL: If he's given the chance, I think he will. His walk rate is a concern, and he hasn't been able to hit lefties, but the rest of his game has been pretty good. He was hampered by a .243 BABIP last year, far below what would be expected from his batted-ball profile. If he'd had something like a .285 BABIP, his overall line would have made him the 5th or 6th best hitter on the team, and he was only 24. Naming Santana the starter at third base seems to mean Lonnie is going to get somewhat limited opportunities, which I think would be a mistake. I'm hoping it just means he'll be at DH instead of third base (which may not make sense defensively, but would make Santana happier).

5. What will the outfield look like with Michael Bourn starting the year on the DL with a strained hamstring? MLB's depth chart has Michael Brantley starting in both left and center!

Why the Indians will win the pennant

Why the Indians will win the pennant

JL: The team hasn't yet said if Brantley will slide over, in which case David Murphy and Ryan Raburn (who are platooning in right field) would both start, or if Nyjer Morgan (a non-roster invitee) will start in center until Bourn is ready to return. The hope is that Bourn only misses a week, but hamstring injuries concern me, because they seem to linger, and if Bourn's speed is limited, he's a lot less valuable. (Editor's note: According to Paul Hoynes of Northeast Ohio Media Group, Morgan will likely get the call to start in center on Monday in place of Bourn. As Jason said, though, there has not yet been an official announcement as of Sunday night. One way or the other, Tony Plush is on the 25-man roster.)

6. Nick Swisher was a big fan favorite in Oakland, and is still well-liked despite a stint with the Yankees and the fact that he always seems to homer against the A's. Has he become a favorite in Cleveland as well?

JL: Swisher was instantly loved by Tribe fans (helped in part by him having played at Ohio State). He brings a goofy energy to the clubhouse, which seems to have rubbed off on a lot of the other guys, and (combined with Terry Francona taking over as manager) changed the vibe surrounding the team. I don't think it's a stretch to say he's the most popular player on the team.

7. Have you learned to spell "Rzepczynski" without looking yet?

JL: So many consonants! Another three weeks or so and I'll have it down.

Thank you, Jason, for participating in this Q&A!

The series starts tonight. First pitch is scheduled for 7:05 p.m. PT, but it will almost certainly be delayed due to rain. Hopefully the weather will cooperate enough that the game can eventually begin, but it's entirely possible that we will be opening the season with a Tuesday doubleheader. If there's a game tonight, I'll have your thread.