A baseball fan traveled to Sydney to see Opening Day between the Dodgers and Diamondbacks. Here is his story.

Editor's note: My friend Raymond got the chance to travel to Sydney for the Opening Day game between the Los Angeles Dodgers and Arizona Diamondbacks. I asked him if he'd like to share his story with us, and he obliged beyond my wildest dreams. Here is Ray's account of his trip to Australia and his experience at Sydney Cricket Ground on March 22, 2014. All words and photos (except photo captions) are directly from Raymond. -Alex Hall

I am a fan of baseball. It was my first love. It's the one thing I've always counted on; 1994's season cancellation notwithstanding. But even though as a Dodger fan, it's been a long time since I've been able to see the boys in blue raise the championship trophy, the game still calls to me. Each spring we all have that same feeling, that feeling that anything is possible. It's that possibility that brings us all back to the game. We somehow forget the heartache if we are fans of one of the 29 other teams that didn't win the World Series last fall.

In this economy, I know I am fortunate to have a job. My job requires me to travel at times and whatever city I go to, once I schedule my flight and hotel, I check whether the local baseball team is in town. I've even had a meeting moved back a day just so I could catch a game. Don't tell my boss about that.

I knew I was going to Melbourne, Australia, for quite some time to talk about the latest innovations in computer network virtualization for learning and network modeling (nerd stuff). So when I found out baseball would be in Sydney, I wanted to modify my trip so I could catch the game. When I found out that the Dodgers were playing, I knew I had to be there.

Australia is a wonderful place. It's full of beautiful and kind people. It's kind of like Canada, but with much better weather. Australia is definitely a sports fan's country. As I walked the streets of Melbourne and Sydney, many restaurants and pubs were pumping out sounds of Rugby, Australian Rules Football, Soccer, and Cricket. And Netball? I watched some of Monday Night Netball. I had to google Netball because I didn't know what that sport was or how it was played.

But here in the land of Koala, Kangaroo and Cricket, there was baseball to be played. To paraphrase Field of Dreams, as I walked into the Sydney Cricket Grounds, I asked myself, "Is this heaven?" I half-heartedly expected to hear a voice whisper to me, "No, this is Australia." 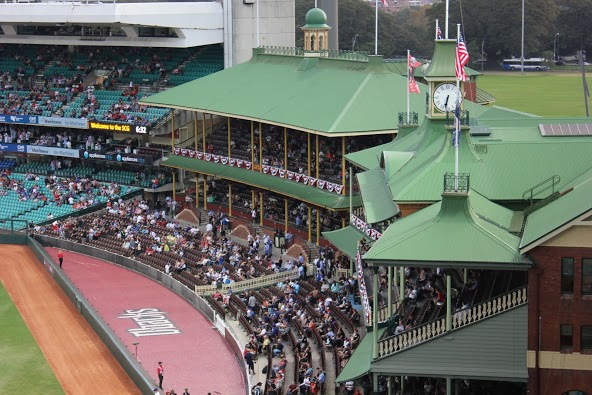 The Sydney Cricket Ground is hallowed ground, indeed. I had three people tell me how special that place is to cricket fans and they all used the same word, "hallowed," in their description. It's been around in some form since 1848. That's not a typo; cricket has been played there for 166 years. The SCG, as it's called nowadays, is a combination of new and old. It's part Old Yankee Stadium, Fenway Park, Wrigley Field and part something new. It is something special, but it's clear that it's going under some renovations and the stands behind home plate where I sat were still under some sort of construction. There were exposed ceilings, missing finished floors, and temporary signage, but it was not going to deter the excitement of the crowd.

Converting a circular cricket ground to a baseball diamond is no easy feat. Outfield bleachers had to be built, fences put up, grass removed for the infield, and clay had to be imported from San Diego just to get things right for the infield dirt. After the Dodgers, my next favorite team is the A's, so the amount of foul territory was a lot; but like the Oakland Coliseum, it's just something you play with. Just for full disclosure, after the Dodgers and A's, I root for the Giants, then the Red Sox and then whoever is playing the Yankees. 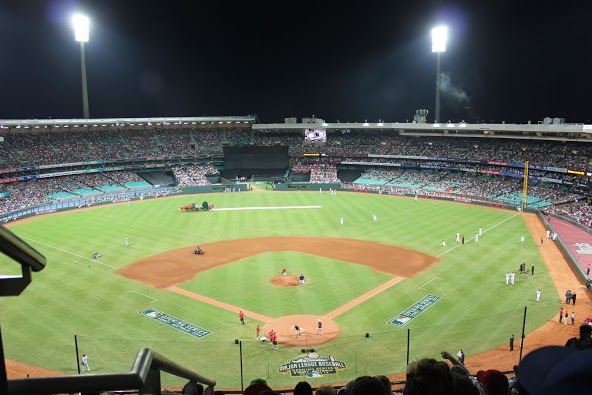 Wade Miley started for the D'Backs. He's a classic lefty pitcher. If he keeps the ball down, he's very good. When he gets ahead of the hitters, he's very tough. Kershaw started for the Dodgers. He's arguably the best in baseball. When he was introduced before the game, the announcer mistakenly mentioned that he had won the C.Y. Young award as the best pitcher in the National League. Not Cy Young, but C.Y. Young as in "See Why" he's the best, I thought. Fastball, slider, curve, sit down. He can make hitters look silly much like Fernando Valenzuela did in the early eighties.

Beyond the pitchers, this game had Paul Goldschmidt at first base for the D'Backs, who maybe should have won the MVP last year. He'll win at least one MVP award before he's done. He's one of those guys you build a team around. There's only a dozen or so of those guys in baseball. Goldschmidt did have a long double to center over the head of Andre Ethier off of Kershaw that led to the D'Backs only run. 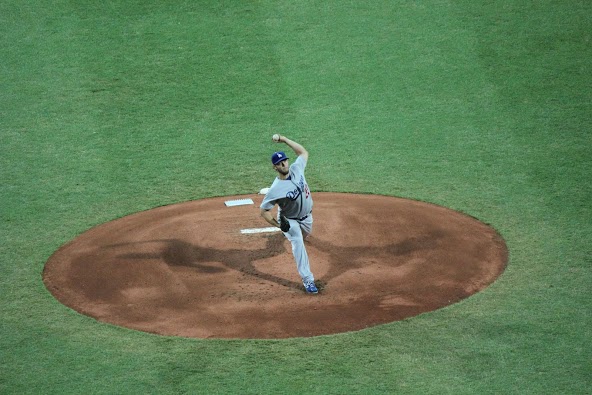 For the Dodgers, there was Adrian Gonzalez, Yasiel Puig, Hanley Ramirez, and Andre Ethier, any of who could be the big bat. But it was Scott Van Slyke who was the offensive hero. He hit a double off the left field wall (I thought it was gone at first) and then hit a two-run homer to right in his next at bat. Those two pitches to Van Slyke were a couple of the few mistakes made by Wade Miley.

For the 40,000 plus spectators, the game was baseball, of course, but it was also spectacle and definitely a social event. Most people knew the rules, but there were some there that us Americans in the crowd were more than willing to help explain the game to. All this came at a price, though. I have four tickets to a game in San Diego next week that cost less than the one ticket at SCG. Couple that with the $14 hotdogs, $20 programs, $50 hats, $25 souvenir baseballs and things add up quick. 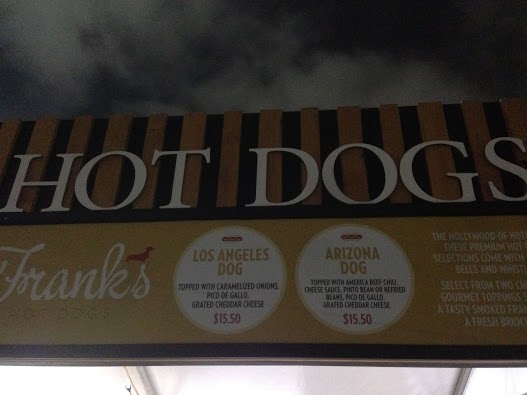 But was it worth it? In a word... Yes! Where else can you see something that has never happened before? I even saw Adrian Gonzalez reach first base on a strike three passed ball (one of the six ways for a batter to reach first base without getting a hit). Former Oakland Athletic Eric Chavez got into the game too, but he struck out swinging against Kershaw.

Besides the players and the action on the field, the crowd cheered every one of the foul balls hit into the stands. In cricket, you don't get to keep the ball if it goes in the stands. The only time I remember hearing the crowd boo, was when the ball boy down the left field line wouldn't toss a foul ball into the crowd. After getting booed three times, the ball boy figured it out and tossed the subsequent foul balls into the stands. The fans were into the game from start to finish. They found the seventh inning stretch interesting; I think they sing at some of their sporting events, but it's spontaneous and not organized like Take Me Out to the Ballgame. 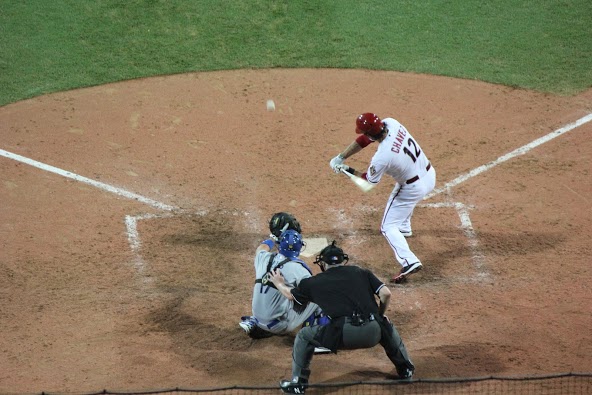 The game was low-scoring as you'd expect in a National League Opening Day game. 3-1 was the final with the Dodgers taking the win based on Kershaw's pitching and Andy Scott Van Sizzles' hitting. Miley didn't have a bad game other than a few pitches to Van Slyke that he'd probably want back. Miley had the same number of strikeouts as Kershaw, something to hang your hat on, but going up against a two time See Why Young award winner is a tough matchup.

In the stands, I saw mostly LA Dodger jerseys and hats along with the D'backs gear, but I was also pleased to see the California Gold and Hunter Green from the Oakland A's and the orange and black of the Giants. I also saw jersey or hats from the Cardinals, Red Sox, Reds, Indians, Brewers, Padres, Angels, Mariners, Pirates, Cubs, White Sox, Rangers, Orioles, Royals, Phillies, and ugh, the Yankees. The only mistake I saw Kershaw make was trying to stretch a single into a double.

All in all, seeing baseball in Australia was worth it. I hope the Australians can further appreciate the game we love. I hope MLB returns to Australia soon. I'd love to see the Oakland A's make the trip and see native Aussie Grant Balfour on the mound. That would be something to see. 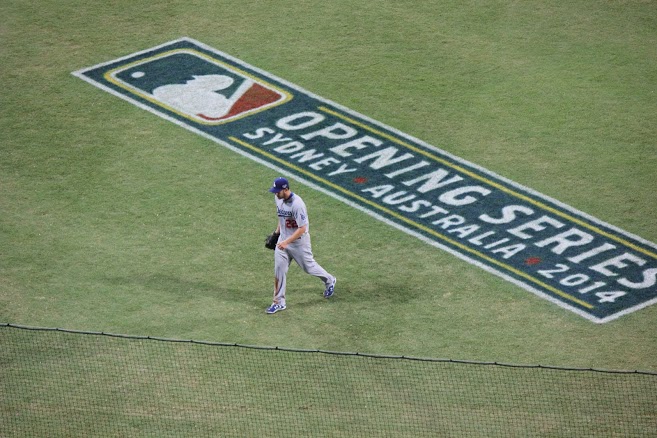 Thanks for sharing your story, Ray! -- Photo credit: Raymond Viscaina

Here's toasting to an A's/Dodgers World Series in 2014!