A recent history of Billy Beane's diamonds in the rough

The A's were bad from 2007-2011, but it wasn't because Billy Beane's magical ability to root out diamonds in the rough failed him. It was because the cores of his teams repeatedly suffered massive simultaneous failures.

Share All sharing options for: A recent history of Billy Beane's diamonds in the rough

Billy Beane is most famous for identifying undervalued players, taking chances on them and then having them turn into productive major leaguers. There's literally an Oscar-nominated movie about it, based on a best-selling book about it. However, it is easy to write off his successes based on his lack of World Series titles (or even appearances). More recently, it is easy to look at the stretch of time between 2007 and 2011 and deduce that, since the team put up poor win-loss records, Billy's magic either ran out or went on hiatus.

In the comment section of a recent article, community member MeatPopsicle (a well-meaning Rangers fan) made some very good points on this subject (I will use the pronoun "he" as a default, but apologies if that is inaccurate; I know that we have commenters of both genders and there is no way for me to tell).

He claimed that replacing an established guy with a replacement-level scrub isn't as easy as replacing a cog in a machine, and he is right; the Rangers did not have much luck replacing their broken rotation last year and they eventually overpaid to rent Matt Garza, which also didn't work. He's also right that the team's margin for error has been reduced significantly. The A's are in a tight spot, pitching-wise, and they can't afford for many more things to go wrong.

I began to disagree with him, though, as our conversation went along. My argument was that succeessfully replacing key players with unknown, undervalued players is Billy's specialty. It is difficult to patch up injured rosters, but Billy is quite good at it. Every year, people are skeptical of his moves and the scrubs or prospects he brings in to replace injured or departed stars, and every year many of those players pan out and "surprise" everyone. Then they depart, and the cycle starts over. Obviously, if five more stars go down, then we're up a certain creek without a paddle. But if we're just talking about Jesse Chavez replacing Jarrod Parker? And one of Josh Lindblom or Drew Pomeranz or Arnold Leon replacing the next guy who gets hurt? That is within the range of problems that Beane can fix.

MP responded that, while Billy's magic worked in the last two years, the fact that it hadn't worked for the five years before that should be a black mark on his record. We can't just say that "Billy always pulls this off" and call it a day, because he failed at it for five years.

Tommy John surgery for Jarrod Parker Till Depth Do Us Part

I'm here to tell you that Billy's magic was working all along. It didn't always result in winning records, because at some point you do need to have a core of good players as well; the under-the-radar scrubs can't do it all on their own. The 2007-2011 teams should have been terrible, but instead they never lost 90 games because Billy found things that worked. The 2012-2013 teams should have been solid, but instead they were division winners because of Billy's magic. Here is a summary of what he accomplished from 2007-2011 (copied straight from a way-too-long comment I made in that thread):

In 2007, the plans didn't work out. The ALCS team fell apart without Frank Thomas and Milton Bradley and Barry Zito. However, Beane converted Chad Gaudin from a long-man/swingman to a 200-inning starter with about league-average production. He also coaxed 230 league-average innings out of Lenny DiNardo and Joe Kennedy that year. That's over 400 quality innings from Gaudin, DiNardo and Kennedy. (Note: Kennedy had pitched out of Oakland's bullpen in 2006 but made 16 starts in 2007.) And he pulled Jack Cust out of thin air and got a four-season run of 97 homers and a 126 OPS+. Everyone knew what Cust was. Only Beane stuck him in the MLB lineup and let him go. The team lost because the core just wasn't good or healthy enough, not because the departed players weren't adequately replaced.

The Wisdom And Folly Of Playing Hurt

Some athletes will laugh and tell you, "If I didn't play hurt, I wouldn't play at all." Not only are injuries part of the game, but grinding it out when you're at less than 100% -- maybe quite a bit less -- is also part of the game.

The Wisdom And Folly Of Playing Hurt

In 2008, things got worse. The fire sale started with Haren and Kotsay going in the offseason, and Harden and Blanton going during the season. However, Jack Hannahan put up 2.4 bWAR at third purely with his defense. Solid-but-middling prospects Greg Smith and Dana Eveland surprised us with about 360 league-average innings. All-Star reliever Justin Duchscherer was converted to an All-Star starter. Brad Ziegler, originally plucked from the Independent League, set a record for most scoreless innings to start a career. Joey Devine, taken off the injury heap in Atlanta, set a record for lowest ERA in at least 40 innings. Emil Brown turned into an RBI machine (kidding). The team lost because no one other than Cust could hit (the lineup had several sub-25-year-old prospects in it) and there was no front-end of the rotation to go with the successful scrubs who stabilized the back-end. It was basically a second-half rebuilding project after Beane (rightfully) thought that the first-half .500 record was a mirage (it definitely was).

In 2009, Beane rolled the dice with two 21-year-old starters (Cahill and Anderson) and got about 350 slightly above-average innings from them. He also somehow turned Dallas Braden into an above-average starter (about 330 innings in 52 starts over 2009/10 with a 115 ERA+, and a perfect game). Michael Wuertz was picked up for spare parts and struck out 102 batters out of the bullpen. He pulled a wild Andrew Bailey (struggling with control as a starter) out of the low minors and turned him into a lights-out, Rookie of the Year closer (and eventually an All-Star). He got a season of average production from Adam Kennedy, who sometimes played at first freaking base. Rajai Davis, swiped from the Giants the previous year literally for free, hit .305 with 41 steals and 3.2 bWAR. The team was 12 games under .500 despite a run differential of minus-2 (should be a .500 team). Many blame Bob Geren's ineptitude for that season. Also, the plan was for Holliday/Giambi/Nomar to step in and pump up the offense, but it didn't work and none of them finished the year in Oakland. It wasn't the scrubs failing, it was the established veterans doing so. (I will concede that Beane has a very poor track record with the washed-up late-30's former-superstar players, with only Bartolo Colon, 2006 Frank Thomas, 2002 David Justice and 1999 John Jaha really working out. Failures include 2008 Thomas, Piazza, 2009 Giambi, Nomar, Sheets, Mike Sweeney, Matsui, 2008 Foulke, even Okajima last year.)

In 2010, Gio Gonzalez finally arrived. He'd been dealt by multiple organizations (and by the White Sox twice), telling me that those teams weren't willing to roll the dice on him if a better offer came along. He struggled to find himself in '08 and '09, but Beane saw something and stuck with him. In 2010, he threw 200 innings, 127 ERA+, 4.0 bWAR. He was an All-Star the next year, and traded for a huge return the year after that. Beane stuck with the questionable guy and was proven right. Granted, he also tried out Ben Sheets that year and he sucked, but hey, I'm not saying every move he makes works out. Regardless, that team finished at .500, led by the prospects Beane had drafted/acquired/developed (Suzuki, Barton, Penny, Cahill, Anderson, Gio, Bailey) and scrubs he had transformed (Braden, Cust, Ziegler). Oh, and he signed a broken Coco Crisp that year when no one else wanted him. That has worked out well. 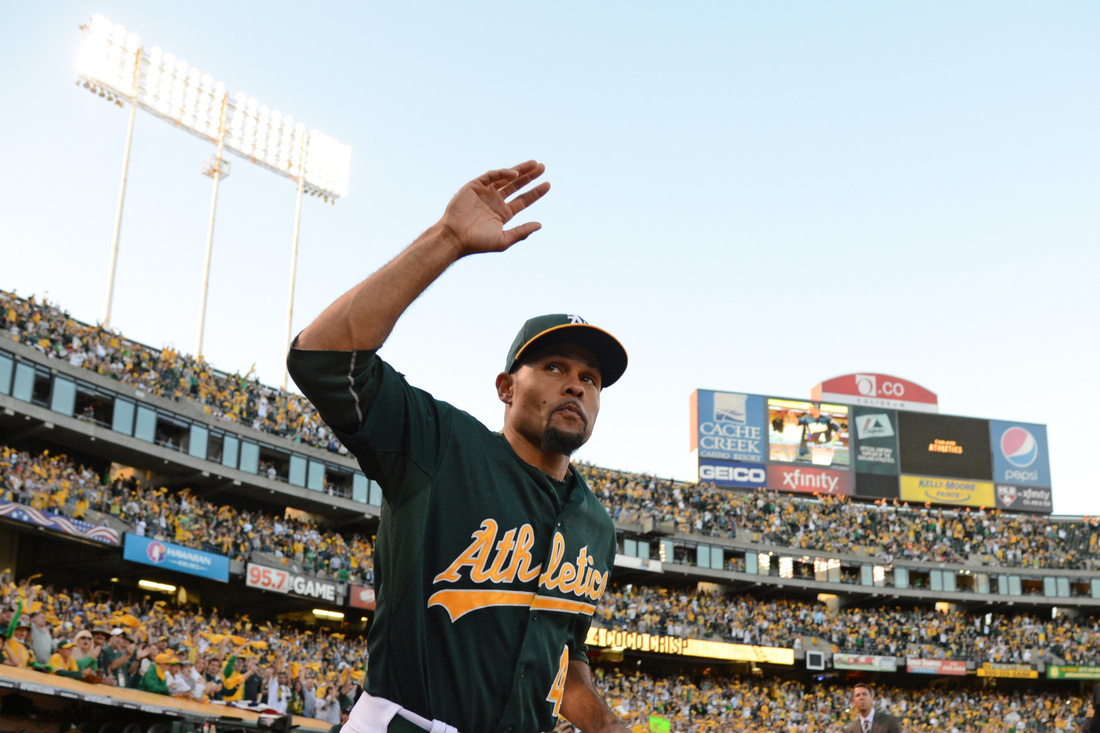 So, to summarize, within three years of Beane's ALCS roster falling apart in mid-2007 (they were .500 at the All-Star break that year), he had returned the team to .500 without ever losing 90 games in a season and without signing a single big-name free agent, making any major trades for established MLB star talent (except for Holliday, but he was here for three months and had nothing to do with the team reaching .500; if anything, he set us back because when all was said and done we'd lost Carlos Gonzalez for nothing), or graduating any transcendent prospect (like Mike Trout or Manny Machado or Addison Russell or something). He patched together a bunch of crap and smoke and mirrors and kept the team afloat.

In 2011, things fell apart again and the progress from the previous year seemed lost. Barton and Suzuki fell apart statistically, Anderson fell apart physically, Cahill regressed after a heavy workload (I still blame Geren for Cahill and Suzuki), DeJesus and Matsui bombed as veteran acquisitions, Bailey spent some time on the DL, and Brian Fuentes was signed. The team sucked for those reasons. And Bob Geren, who had been managing like that rookie team-owner in your fantasy league, was finally canned, so there was some extra internal turmoil. It was a very depressing year. But Billy still salvaged Brandon McCarthy's career and got 170 innings with a 121 ERA+ that season. And another 128 innings (119 ERA+) from Guillermo Moscoco (later parlayed into Seth Smith), and nearly a no-hitter. Scott Sizemore was picked up for a song, converted to third base, and posted a 114 OPS+ in 93 games. It was a bad year because too many stars sucked or were hurt, but Billy filled in the gaps nicely with guys who others would have scoffed at. That team should have been way worse.

And then we get to 2012 and 2013, which need no explanation. But this time, the core of the team was good, so the scrubs he added were enough to push us over the top into the playoffs.

I'm sure that other teams could go through and pinpoint some unknown players who yielded dividends when given a chance. But I'll bet that they don't have the quantity of success stories that Billy does, partly because most GM's don't try out as many interesting-but-questionable players as Billy does. Because they aren't as good at locating them, probably, or don't have the same confidence in their convention-defying decisions, or have the money to patch a hole with a "safe" free agent. Billy is probably the best GM in the game at finding those under-the-radar players, just like he was in 2002.

So, if Kazmir and Gray and Cespedes and Coco and Cook all join Parker and Griffin on the DL and the core of our team falls apart (not just a couple of guys), then yeah, we'll probably miss the playoffs like we did for all of those years. But through it all, through thick and thin and win and lose and the ups and downs of the stars, Billy consistently takes guys like Jesse Chavez and turns them into average-or-better major leaguers. It's not a 100% conversion rate, but it's high enough that I've learned to give him the benefit of the doubt when he says, "This guy who looks like he sucks is actually really good." As long as several more key injuries don't pile up, I am supremely confident in Beane's ability to replace two or three key players with whoever happens to be walking by on the street that day.

Thank you MeatPopsicle, for coming over and participating in a respectful debate on Athletics Nation! So that you all know, he had nothing but kind words to say about the A's and hopes that our two teams are fighting for the division while the Angels watch from outside. Please come back and talk some baseball with us any time!