Welcome to a St. Patrick's day edition of A's baseball. The Cubs are bringing a split squad with them, so hopefully the A's can take this one handily. The Cubs starting pitcher is James McDonald, as a result of McDonald's St. Patrick's day Shamrock shakes cross promotion.

McDonald is a veteran coming off shoulder problems, who signed a one year minor league deal with Chicago for $1 million in January and is competing for a spot in their rotation. His cousin, a Cubs non-roster invitee, believes he still has major upside.

The Cubs' slogan on their team website is "COMMITTED," as in committed to a mental institution after watching Cubs baseball for a lifetime. Even "Green Collar Baseball" is better, at least I think so.

As you know, the A's are the only team in MLB that uses green so they are destined to win today. Even the Marlins somehow left out green in their fluorescent rainbow uniforms, which is pretty remarkable.

Jarrod Parker has his appointment with Dr. James Andrews today, who I can still visualize trolling the sideline in his million dollar jacket during the NFL playoffs tragicomically screwing up the RGIII situation. The guy is like the Voldemort of doctors or something. I'm not expecting good news, but we'll see. UPDATE: A second Tommy John surgery it is. Bummer.

Also in other news, Susan Slusser speculates that Jesse Chavez will stay in the rotation. I suppose that means as of now Chavez is above Milone on the depth chart. Chavez will have a chance to bolster his position when he starts tomorrow against the White Sox.

The A's send Scott Kazmir to the mound, who may end up being the de facto opening day starter against his former team. UPDATE: Kazmir is scratched with a triceps issue and Joe Savery is starting.  This will be a long day. 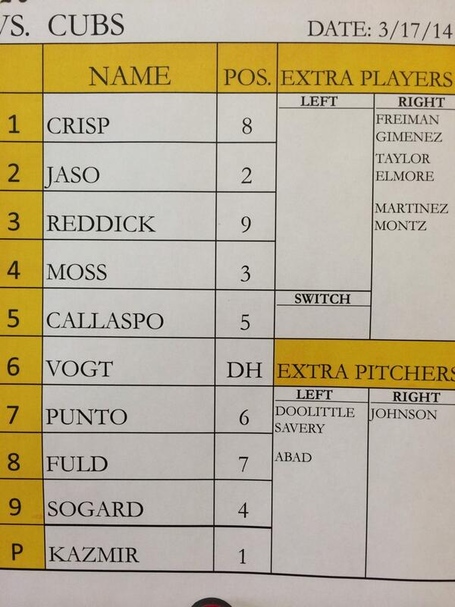