Hitting the Other Way

Let's look at the science and art of hitting the other way. (And why it is so friggin' hard.)

Share All sharing options for: Hitting the Other Way

Author's Note: In an effort to keep this to a light Friday afternoon read, I am keeping the physics of this to a first order. For more details I encourage the reader to pick up The Physics of Baseball by Robert Adair. Also, I will be referring to hitters' swing paths. If you are not familiar with what I am talking about read this.

For this week's post (and next week's as well), we will travel twenty years into the future and meet Oakland's 2034 top prospect - Brooks. On Opening Day, Brooks steps into the box and crushes one over the centerfield wall. Below is an illustration of the overhead view of the at-bat. Basically Brooks timed it perfect and made contact right on the sweet-spot (red area) of the bat. 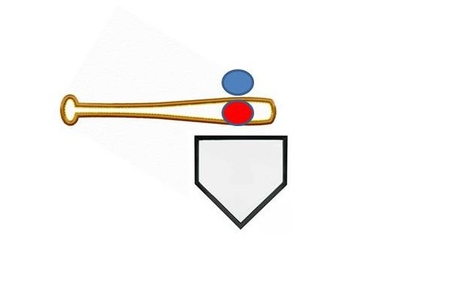 Brooks is a hero for the day, but there is a problem. Brooks grew up in the East Bay area a die-hard A's fan. He watched the A's games on Comcast with his dad since he was 1 day old (something Brooks' mother can certainly attest). Brooks knows that all the TV analysts (especially Ray Fosse) want Brooks to hit the other way. So he has to make an adjustment. How does he do it?

Since Brooks is the son of a certain East Bay Hitting Instructor, he was taught that the coarse swing adjustment for hitting to different parts of the field is the rotation of the torso, namely the shoulders. Brooks was shown swings of A's Hall of Famer Josh Donaldson since birth. See how on balls Donaldson hit to right-field his shoulder rotation hasn't pulled the front arm over his body yet. This leaves the bat at an open angle to hit the ball to right-field. 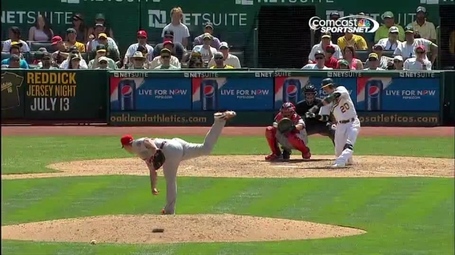 From the side, we can see the angle just a tick before contact. 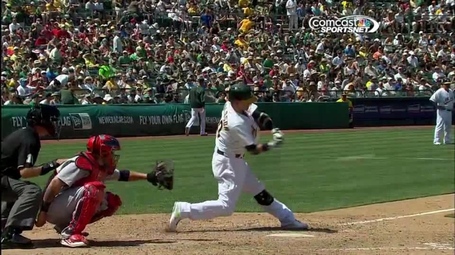 On the other side of the spectrum, we see that on pitches Donaldson pulls, his shoulder rotation has pulled his rear arm through close to his side. 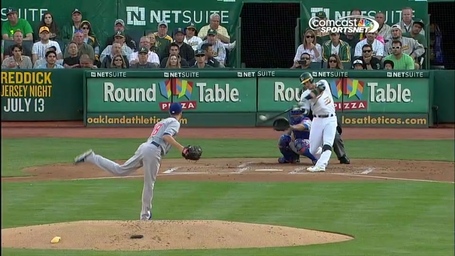 And from overhead, the bat forms an angle to hit the ball to leftfield. 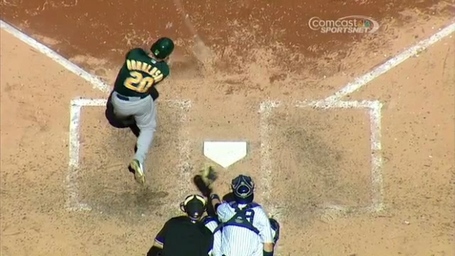 So when we revisit Brooks' swing from overhead, we see how contact will have to look to hit the ball the other way. 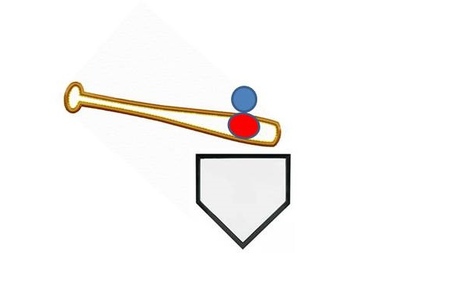 Despite the TV analysts' best intentions, Brooks had just made things A LOT harder for himself. Let me explain. First, because the bat is now at an angle, the sweet spot is now smaller due to our high school trigonometry properties. Brooks is going to have a harder time making contact on the sweetspot. Next, because the ball is deeper in the zone, Brooks has less room to get his swing up to speed and on the right path. When we look at the speed of the bat, we know it starts from a stop and reaches maximum speed somewhere around the time the bat reaches his front foot. Below is an example profile of the bat's speed vs. distance traveled. Early in the swing's path, there isn't much speed yet. Each hitter's acceleration is a little different, depending on the swing. Factors that contribute to swing acceleration are lower body function (the legs can provide a lot of torque) and front side mechanics. 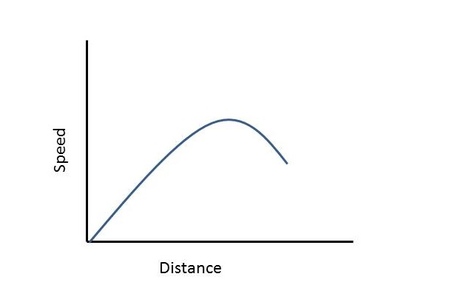 No wonder BIS found that the deeper in the zone a pitcher can induce contact the better (want to share a plot danmerqury? I saw it in Baseball America).

Now fortunately for Brooks, his dad taught him about the correct swing path. His swing is long enough to get up to speed deep in the zone to make solid contact. When we look at Brooks' swing path from overhead, we can see his power zone is well placed to allow him to hit to his pull side, centerfield, and the opposite way. 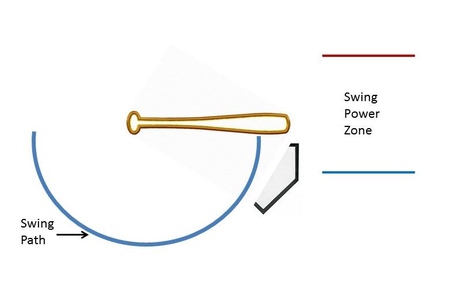 Contrast that path with the overhead view from players from Brooks' childhood days - say Brandon Moss (reversed for easy comparison). 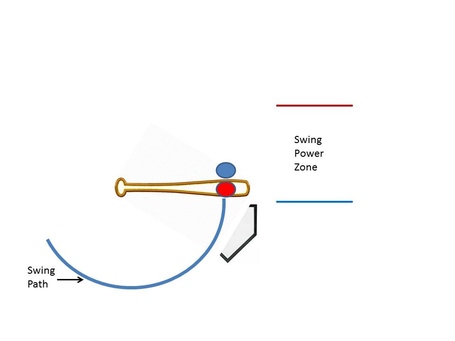 Moss' path still needs the same distance to get up to speed but he started closer to the hitting zone, so his usable power is a little farther up in the zone. He isn't going to have much success letting balls get deep in the zone and hitting them the opposite way. In fact we see the effects of Moss' path when we look at where he hits the ball - way out by his front foot with both arms nearly extended. That is where his power is. 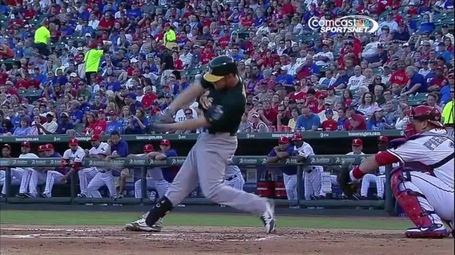 But is this so bad? Moss' power zone isn't centered, but who cares? Well... Since the power zone is shifted up a little, timing is going to be even more important. With the ideal power zone, hitters' timing can be a little off and still get the ball on the sweetspot. With the shifted power zone, if the hitter is just a little early, the hitter is going to get a swing-and-miss or weak contact off the sweetspot. If the hitter is late, the ball will be on the slow bat speed zone and result in a lazy flyball the other way. (If this sounds familiar to Josh Reddick as well, you would be correct. His swing path is not suited for hitting the other way.)

We can see how difficult it is to hit the opposite way when we look at the stats from Brooks' birth year of 2013. We see the further out in the in the speed curve of the swing, the more success hitters have. We see a higher average wOBA for centerfield contact than opposite field, and still yet better for pull contact. Fewer hitters are able to achieve success hitting deep in the zone. The distribution even changes for opposite field. A few good hitters are present in the high end, but then a lot of hitters are in the lower end.

There is one thing that is going to help Brooks hit the other way - he hits right-handed. Let me explain. Our overhead shots neglected the angle the ball is thrown to the plate. The majority of pitchers are right-handed, meaning the ball will impact the bat with a slight angle from the shortstop side of the pitcher's mound. So on a perfectly timed ball, the ball will actually be hit toward right-center. See graphic below. 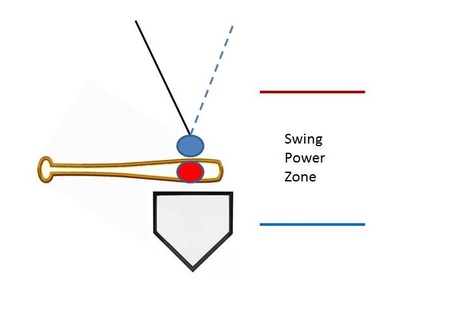 So for a right-handed hitter facing RHP, the hitter only needs to let the ball travel a little deeper to hit the ball the other way. See the graphic below. 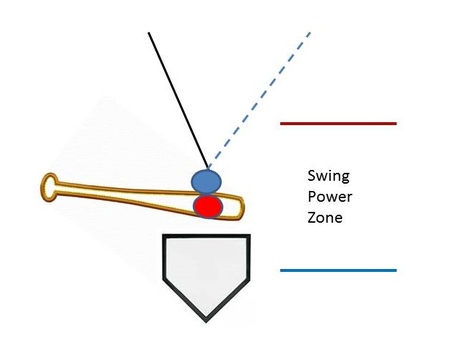 But for a left-handed hitter facing RHP, for him to go the other way he really is going to have to open the bat up and let the ball travel deep. This puts him on the lower end of his acceleration curve and doesn't give him much chance. See the graphic below. 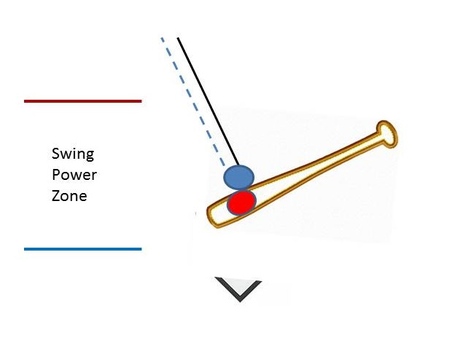 When we look at the left-handed names on the opposite hitting leaderboard, we only see the absolute best in the game. Names like Chris Davis, Joe Mauer, and Joey Votto. Guys who have great swing paths (having 220+ lbs. behind the bat certainly doesn't hurt either). It is really hard to hit the opposite way, especially if you are hitting left handed. That's why asking guys like Daric Barton (a left-handed hitter with a very short path and -let's be honest- less than elite bat acceleration) to fix his hitting woes by "just going the other way" is probably not going to work. We are simply asking way too much of poor Barton. Barton would be much better off fixing his swing so he has the ability to hit the other way.

The same is true for right-handers hitting lefties. So when we see Josh Donaldson take Madison Bumgarner deep to right-center, we get an idea that Donaldson has an elite swing. Due to Donaldson's swing path, Donaldson's power zone is well centered and can still make hard contact on pitches deeper in the zone.

So despite what the TV analysts say, Brooks shouldn't try to hit the opposite way on pitches. If he is slightly late, his swing path will allow him to hit the ball the other way, but he should be looking to use the better part of the swing speed curve. In next week's article, we will look at Brooks' swing in relation to pitch location and see what adjustments he should make. (Spoiler alert: it is all in the hips.)