So as some of you know I am currently in my first the first year of Graduate school up in Washington. However, I spend the same time, if not more time thinking about baseball, than focusing on my studies. Recently I have been thinking about the Oakland Athletics’ pitching depth. The more I think about it the more excited I get. You can even say I get a little giddy. Especially about Drew Pomeranz. Why Drew Pomeranz? Well, lets take a quick look at the guy shall we?

In 2007 Drew Pomeranz was drafted by the Texas Rangers, however he decided to go to college instead. He was the #5 draft pick in the first round of the 2010 Major League Baseball Draft, and signed with the Cleveland Indians on August 16, 2010. Pomeranz recived a $2.65 million signing bonus, which was was the largest bonus given to a college pitcher in the draft that year. In 2011 he was considered one of the top 50 prospects in baseball, coming in at #26 on the MLB prospect watch list. On July 31, 2011 Pomeranz, along with several other players, was traded to the Colorado Rockies for Ubaldo Jiménez. He made his Major League debut starting against the Cincinnati Reds in September of 2011. He pitched five scoreless innings and picked up the win. He made 4 starts 2011, finishing 1-2 with a 5.40 ERA. And as we all know on December 10, 2013, Pomeranz, along with minor league pitcher Chris Jensen, was traded to the Oakland Athletics for pitcher Brett Anderson, which caused quite a ruckus here on AN.

Thomas Andrew Pomeranz, 25, comes in at 6'5", 230lbs. Pomeranz has a fastball that reaches up to 95 MPH on his best days. But his fastball is known to have good movement even at lower velocity. His repertoire also consists of a "knee-buckling" curveball that averages at about 77MPH and a changeup that is considered to be a work in progress.

In 2013 Pomeranz pitched in 8 games starting only 4, and a total of only 21.2 IP. He had a 6.23 ERA, 6.64 FIP, 5.39 xFIP. In 2012 started 22 games, had 96.2 IP, a 4.93 ERA, 4.81 FIP, 4.49 xFIP and was worth 1 WAR. Now these aren’t the most phenomenal stats.. but what really caught my attention was his MiLB stats. His K% in all levels of the minors ranged from the low-mid 20%, with K/9 rates averaging around 9. I wont get into great detail about these because you can check them out on fangraphs, but his MiLB stats are fairly similar to Sonny Gray and even somewhat similar (and I am making a bit of a stretch with this one) to Clayton Kershaw. The main thing is this guy was sort of KILLIN' IT in the minors, at least that is my opinion.

So for most pitchers, being able to locate the ball is extremely important to their success. However, this was an issue for Mr. Drew Pomeranz while with the Rockies, because as we know high altitude has shown to have effects on breaking balls and generates challenges for pitchers. I personally believe that the main reason Mr. Pomeranz did not succeed in Colorado was not only due to being rushed into the majors, but because he relies on his breaking balls a good amount (29.5% in 2013). Now we have heard altitude can have an effect on the movement of balls, so I decided to put my graduate level studying skills to work and look a bit deeper into this phenomenon.

I did some research and came across a paper by University of Illinois Physics professor Dr. Alan M. Nathan on baseball at high altitude. So looking at his research he has come to explain that when pitching at high altitude, we can expect two primary effects. First, pitched baseballs will move a little bit quicker in Coors than at a park at sea level. Dr. Nathan states that a baseball loses 10% of its speed in at sea level, so the average speed of a pitched ball is about 95% of its peak speed. At Coors, the baseball loses only 8% of its speed, so that the average speed is about 96% of its peak speed, or about 1 mph faster, meaning that where Pomeranz sometimes reached 96MPH at Coors he is less likely to reach that speed in Oakland or Sacramento. However, the more important factor is the reduction in the Magnus force, which results is less break or movement on a breaking ball. According to Dr. Nathan if 18 inches was the typical break at sea level due to the Magnus force, an identically thrown pitch at Coors would break only about 82% as much, so about 14-15 inches. Now here is where it gets a little more interesting, according to Dr. Nathan, "an overhand curveball will drop about 4 inches less at Coors. An overhand fastball will drop about 4 inches more at Coors. Why "more"? Because the upward Magnus force opposing gravity is less at Coors. A ball thrown with pure sidespin will have a sideways break about 4 inches less at Coors."

This is chart below shows the range of movement from a sample of 5,000 curveballs thrown by right-handed pitchers in the 2012 season outside of Coors Field. (I know Pomeranz is a lefty but this is the data I found) 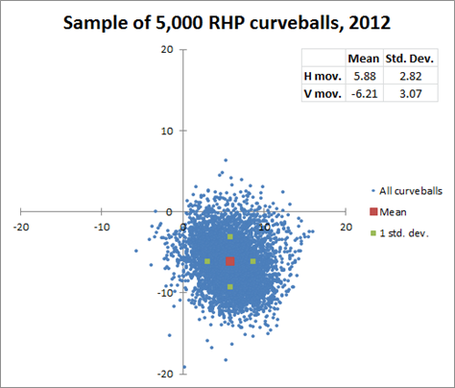 Now you can see that there is a wide margin of movement for these pitches. Below is a graph of all right-handed curveballs thrown in Denver by visiting pitchers during the 2011 and 2012 seasons (1,471 pitches). 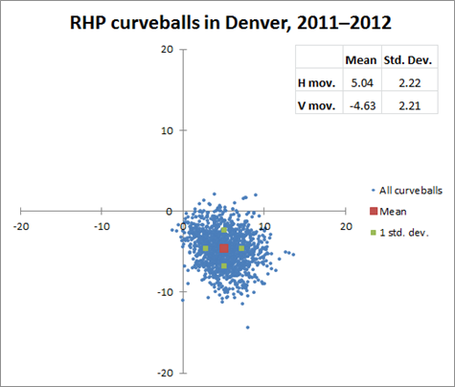 You can see that there is less of a margin of movement on this chart on both the vertical and horizontal axes, granted there are fewer pitches. Now keep in mind it is more than possible that there may not be much of a difference in charts if there had been 3,500 more curveballs thrown in the chart above. But for the sake of this article lets just not think about it. Nevertheless, you can see the shift in vertical and horizontal movement in the following overlay. 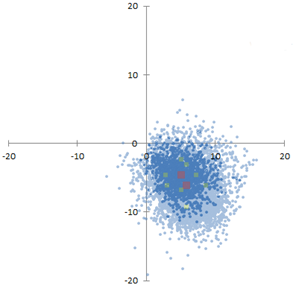 The PITCHf/x data used here indicates a Coors Effect of about 1 inch of horizontal movement and 1.5 inches of vertical movement

So how did that effect Pomeranz?

Now I know the data above has some flaws and the following data is a small sample size but he didn’t pitch too many games last season, but just bear with me. Here I have selected 2 of his starts one where he pitched an away game in against the Dodgers and one home game against Miami, pitching 4.1 and 4 innings respectively.

In the game against the dodgers you can see in these 2 charts the movement of his pitches vertically and horizontally. (focus on the red triangles, curveballs) 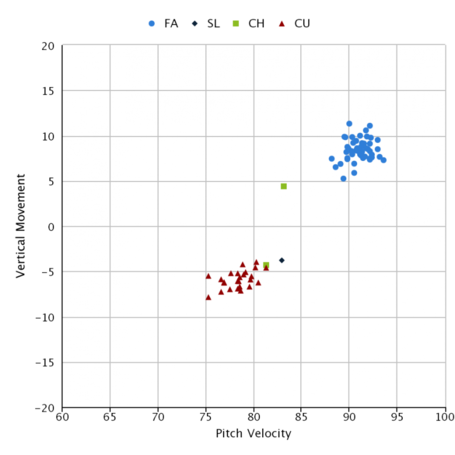 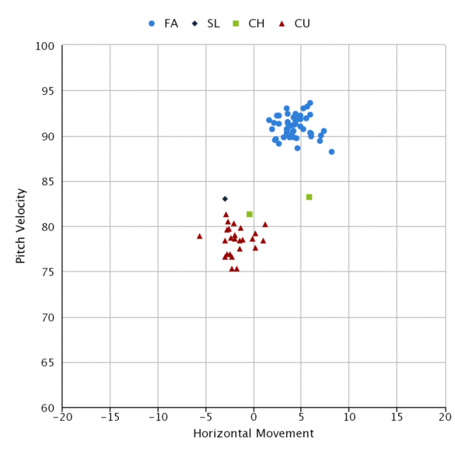 As you can see in the game where he pitched in LA there was both increased horizontal and vertical movement on his pitches, compared to the charts below vs Miami @ Coors Field. (focus on the green squares, curveballs) 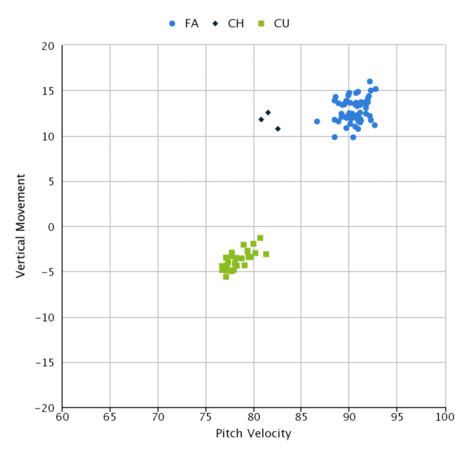 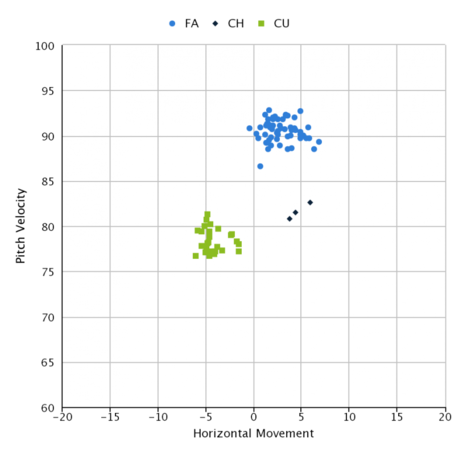 So Why am I so excited? Drew Pomeranz was pretty darn good in the minors, he had pretty darn good K/9 rates, K%, ERA, and FIP. And although he struggled in the high altitude environment of Coors, his pitching is guaranteed to improve by moving down to sea level, as we saw above with the effects of high altitude. Now, Pomeranz was said to have some inconsistencies in his pitching mechanics, which I believe can be attributed to rushing his development. But the bright side is the A’s are known for their development of young pitchers so his time during spring training, and spending some time in AAA can be/will be extremely important and beneficial to his development. He’s got a lot of upside and this top 5 draft pick has been said to have stuff that can be compared to Clayton Kershaw in this article here, which got me really excited. I have a feeling that Drew Pomeranz will be able to be the potential ace he was considered to originally be and be a major contributor to the A’s in the next couple of seasons.