Get Ready To Usher In A New Season

Share All sharing options for: Get Ready To Usher In A New Season 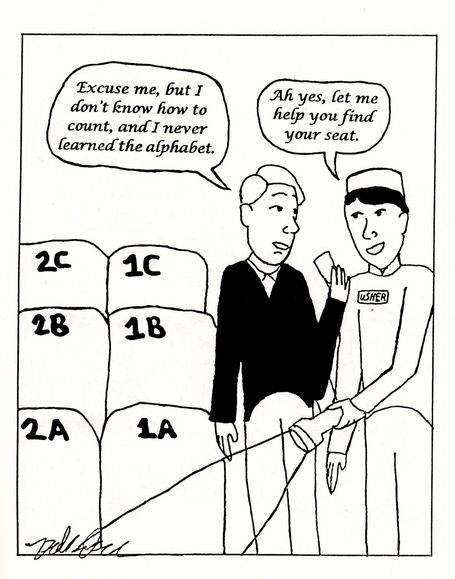 I truly believe ushers think they are being helpful when they accost you, block your passage way, and ask if you would like help finding your seat. "Well gee, if I were to go up to 'J' and then walk from 1, past 2, until I got to '15' -- do you suppose I would find my seat that says 'J-15' on the ticket stub?"

Granted, some stadiums and theatres (why does spell check think this is spelled wrong? Do they hate the British??? I mean I hate their cooking, obviously, but they seem like awfully nice people) pull the old switcharoo and have odd sections on one side, evens on the other, but we patrons are a resourceful people who can make that much of an adjustment without an escort.

"Can I help you find your seat?" would be more useful if the seats were occasionally hidden, like a treasure hunt. Let's say you marched up the aisle to row J, past Js 1-14 only to find...what's that?...A blank space between J-14 and J-16 about the width of a seat! "Can I help you find J-15?" the suddenly extremely useful usher would inquire. "Sometimes they're hidden in the balcony, other times just outside the men's restroom. I know one spot our floor manager especially favors. Let me show you..." Anyhoo...

In case you missed it, Baseball America released its Top 100 list and Addison Russell checks in at #14. What's interesting is that if you just read the blurbs for Russell and for the prospects above Russell, if you didn't know better you might think the A's prospect was more like #5 or #6 -- there are more serious concerns noted around many of the prospects who are rated above Russell. In any event, do you think BA's top 15 is about right, or should Russell have been placed higher or lower than he was?

As for the rest of the A's in the top 100, well, there aren't any. Unless you count Michael Choice, which you can't because he's now a Texas Rangers' prospect. Choice just makes the cut at #98, whereas the closest Raul Alcantara comes is in having his namesake, Arismendy Alcantara, snag the last spot at #100.

Meanwhile, no pressure on former A's infielder Scott Sizemore as he tries to make the Yankees' roster. Sizemore has been given Robinson Cano's #24 and will compete for the 3B spot left open by Alex Rodriguez. In all seriousness, Sizemore's plight has been kind of a sad one and I wish him well even though he now toils for the Evil Empire. May he have a terrific season as the only Yankee to avoid the DL.

What do Ervin Santana, Stephen Drew, and Kendrys Morales have in common? They're all free agents who rejected qualifying offers of $14.1M and are still unsigned. It's risky to reject a qualifying offer because teams are reluctant to sign such players knowing they will lose their #1 draft pick in the process.

That's why I think the A's best move with Jed Lowrie would be to let him play out his contract, and then after 2014 make Lowrie a qualifying offer. If he accepts, the A's have an excellent middle infielder for another season, at a somewhat high price but also with only a 1-year commitment -- similar to Jim Johnson this year. If Lowrie declines, the A's get a draft pick when he signs elsewhere, with Addison Russell ready to step in as the A's full-time SS.

There has been a lot of talk on AN lately around extensions -- Cespedes, Donaldson, Gray -- but Beane's best moves are generally those that do not yield long commitments. In the case of Lowrie, getting another season and then making a qualifying offer, is probably Oakland's wisest move. Agree? Disagree? Can I help you find your seat?