Tooth, The Whole Tooth, And Nothing But The Tooth

Share All sharing options for: Tooth, The Whole Tooth, And Nothing But The Tooth

This week's cartoon is chosen to celebrate my semi-annual teeth-cleaning coming up on Wednesday: 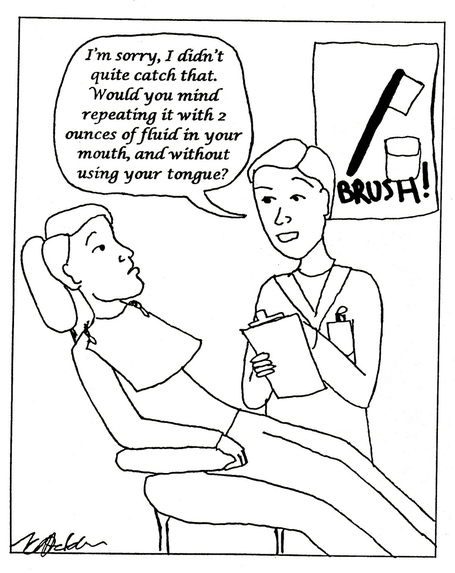 The appointment is at 10:10am, though, and frankly I'm a firm believer that dental appointments should always be at tooth-hurty. Speaking of dental work, if you're an AL West team it's like pulling teeth to get through a workout without unearthing a new injury.

First Derek Holland is at home apparently doing some version of "downward facing dog" when his pit bull or chihuahua or whatever it is causes him to wobble like a weeble but then also fall down. Then in news that's hard to stomach, Seattle's Franklin Gutierrez announces that his GI woes will sideline him for all of 2014. (If only there were a heroic action figure named Gastro Intestinal Joe who could rescue Gutierrez.) Now Ryan Cook (shoulder) and Sean Doolittle (calf) have arrived to camp with owies and then yesterday, would-be Angel Mark Mulder found out what his achilles heel was...ruptured, that's what, during agility drills.

Imagine what will happen once these teams start playing actual games. Of course the true victim here is the Mariners' Jesus Montero, who innocently spent the off-season eating like a Colon and not working out or conditioning and then somehow came to camp overweight and completely out of shape. That man is determined to somehow be less useful than Michael Pineda.

Yesterday's big news out of camp was the effusive praise Bob Melvin had for pitchers Evan Scribner, Josh Lindblom, and Fernando Nieves, otherwise known as "fungible long reliever, 2013 league whipping boy, and guy I've never heard of". If that doesn't get you excited...Aw heck, it's baseball. Sure, I'll get excited. For all I know those guys might have come to camp in the best shape of their lives.

Wait, Drew Pomeranz didn't throw yesterday due to an ingrown hair? Is that even a thing? I've heard of an ingrown toenail but I've never heard of an ingrown hair. Hair grows in now? I need to look into this, but I'm not sure whom to consult. The Barber of Seville? Red Barber? Barber Streisand? When I google "Barber Streisand" Google asks me "Did you mean Barbra Streisand?" No, and if you couldn't trust that I knew what I was searching for then how come the search I asked for yielded 1.6 million hits? And why the heck does anything yield 1.6 million hits? Besides Joe Blanton; I get why he does.

OK I should probably end this before I start rambling.

In actual baseball news, Josh Reddick and the A's have agreed on a one-year, $2.7M deal to avoid arbitration. Insiders have confirmed, off the record, that the structure of the deal is actually a base salary of $500,000 plus $50,000 each time someone on AN passionately expresses an extreme view on Reddick's value.