This week we look at the swing adjustments required to cover the plate.

Last week we left Brooks in pretty good shape. He has a good swing path that allows him to hit to all fields if needed. But Brooks' job isn't done. He knows pitchers are going to adjust and start working him away from the middle of the plate. So how does Brooks adjust his swing to handle these pitches?

Let's revisit our overhead view of contact. But this time there are two extra balls to show inside and outside pitching. 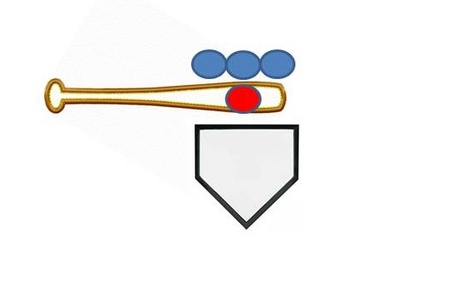 Brooks is going to have to make a swing adjustment to hit the inside and outside pitches. And if he doesn't do it correctly, the pitcher will certainly have the upper hand. Let's start with hitting the outside pitch.

We know to hit the outside pitch, Brooks has to essentially lengthen the bat to get the sweetspot to the ball. This could this pose a problem due to our old friend conservation of angular momentum. Since we are in the 2034 Winter Olympics, let's use the analogy of the figure skater. Let's start with the figure skater spinning with the arms and legs close to the body. The skater then extends the arms away from the body. What happens? The skater's rotational velocity slows. Why? Conservation of angular momentum. The body's moment of inertia (torque lever) is greater, meaning for the same force the skater gets less angular velocity.

If we relate this to the baseball swing, we see that if the bat gets farther away from the body, the swing will slow down. This certainly isn't a good thing. We don't want the bat slowing while making contact. So what do we do? Let's visit a player from Brooks' early days - Brandon Moss. We saw Moss' swing wasn't ideal for hitting the other way, but maybe he does something in his swing to allow him to hit the outside pitch. Below is a portion of a swing Brandon Moss connects on a pitch just on the lower outer third (pitchf/x here).

We have drawn a green line through his upper body starting when his front foot touches the ground. What do we see? Moss adjusts his posture to bring his body to the ball. Instead of just "throwing his hands," he adjusts his body's posture to keep his bat close to his body (conserve his angular momentum). See how his head ducks under the line kinda like the limbo? By having a good hip bend, Moss his able to use his legs to drive the rotation of his body and absolutely KILL the pitch for a home run.

When we look at Moss' heat zones, we see he is able to cover the outside part of the plate very well. On pitches more outside, he simply bends more. 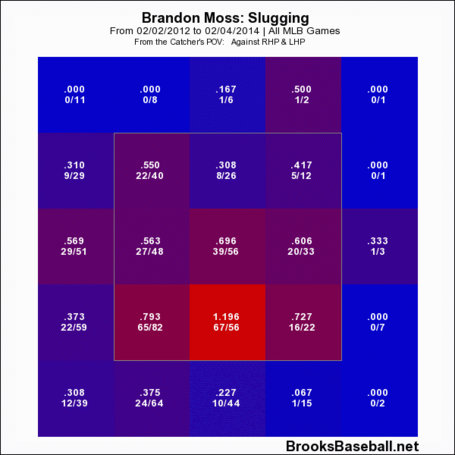 Now let's look at another player - Daric Barton. Below is an at-bat in which Barton adjusts to a pitch on the outer third (actually pitchf/x has this pitch at middle-low, but that proves my point even more).

We see a different swing pattern than Moss. First, as Barton is setting his front foot down, he is very tall - meaning he has very little hip bend. Then to contact, we see Barton makes very little adjustment to his posture. Instead of taking his body to the ball, Barton "drops the barrel" and lets his rear arm drift away from his body (doesn't conserve his angular momentum). Because Barton has very little hip bend, his lower body function is really muted. Compare the contact positions of Moss and Barton. Really worlds apart. Moss continues his rotation through contact - powering his swing with his entire body. Barton quits his body rotation and swings with not much more than his arms.  See how Moss gets hit belt buckle pointing toward centerfield (sign of good rotation) while Barton's belt buckle is pointed more toward left-center. And Moss had to hit a more outside pitch!

So while the Comcast guys praised Barton for flaring the ball into leftfield four inches over the 3rd baseman's glove and "not trying to do too much" with the pitch, the plain truth is Barton go lucky on a bad swing on a pitch he was beaten. We can see the results of Barton's hitting posture by looking at where his power zones are. 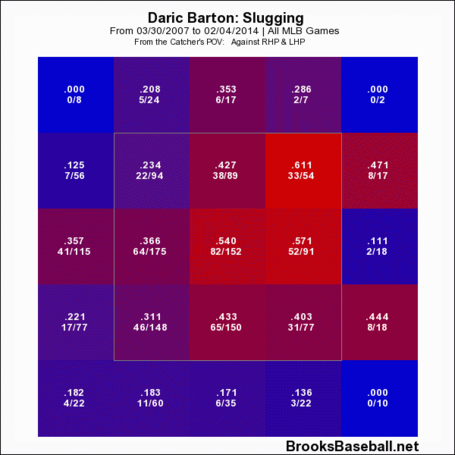 By and large he hits for power only on the inner third and up. Why? Barton doesn't adjust his posture for hitting well and those are the zones someone with upright hitting posture can handle. Barton is what I like to call a lazy hitter, just swinging with the arms and not the body.

So we see Brooks should adjust his hip bend to handle the outside pitch. What about the inside pitch? The inside pitch can be difficult because we have to make space to bring the bat through. How do we do it? You guessed it. By adjusting the hitting posture.

Below is a clip of Josh Donaldson adjusting to an inside pitch. We see a similar movement pattern, just in reverse. Donaldson adjusts his posture to bring his head above the line and give room for his arms to come through. Donaldson isn't "bringing his hands in" he is adjusting his hip bend. If Donaldson doesn't adjust his posture, he would have to break down his front arm to get the bat through and we saw in the front side mechanics article we don't want to do that (Brooks' dad may have been on to something there).

We can see that Donaldson is able to handle inside pitching extremely well, even pitches off the plate. How? He adjusts his hip bend. (Author's Note: Honest to God, I looked up these charts after I selected these guys as examples.) 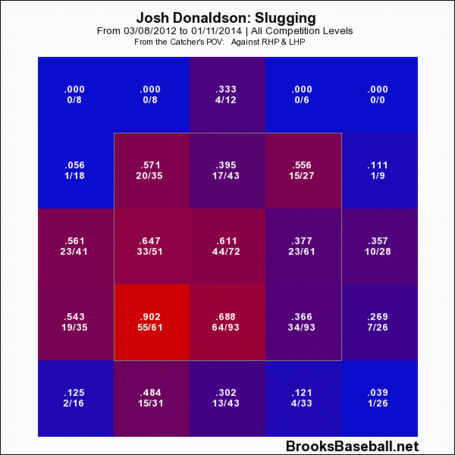 Well, that's that. Brooks knows how to hit to all fields and cover the plate. Hopefully his dad didn't give away too many hitting secrets writing for Athletics Nation.