Who Are You Gonna Believe: Me Or Your Lion Eyes?

Share All sharing options for: Who Are You Gonna Believe: Me Or Your Lion Eyes?

This probably shouldn't be one of my favorite cartoons, but alas it is. Enjoy/Accept my prepologies. 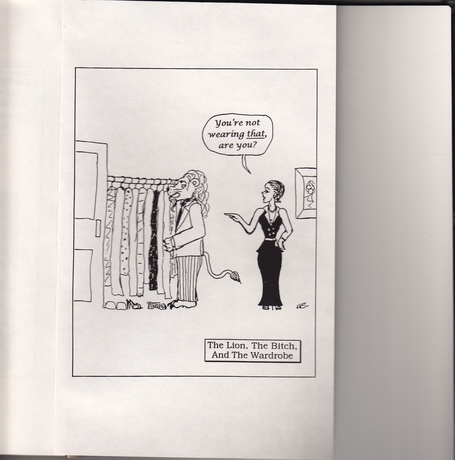 The phrase "lion eyes" is so unbelievably dynamic. Besides describing what is looking at you thinking, "Dinner!" the Eagles parlayed the expression "lyin' eyes" into a hit song. And then there's the word "lionize" -- something we have been known to do, around here, with Billy Beane. We do not, however, tigerize, bearize, or really iz-ify any other creature, so it's unclear how lions earned this considerable honor. But they're large and they guard the library, so who am I to question their place in our vocabulary?

In any event, this past week I committed the act that, to me, officially begins the new baseball season. And it had nothing to do with a farm animal!!! I purchased a non-refundable plane ticket to go down to spring training. 2014 will be the A's last year in Phoenix, as they are moving their home digs to Mesa's Hohokam Park in 2015. (Shouldn't they do Christmas festivals there?) The only trip I have ever made out to Mesa was to broadcast an A's spring training game about 25 years ago and the game was rained out in one of those epic Arizona torrential downpours. (Or is it "downspour"?) So I have been to the stadium but I have never actually seen the pitching rubber.

My trip this year will be at the end of the 3rd week of March, which is about when I have most commonly attended. Last year I went much earlier -- the first week of March -- and that was great in its own way with so many more of the minor leaguers still in camp, and the weather a bit milder. It's basically a choice between a great time and a great time.

Can I just take this opportunity to recommend that every A's fan make it down to spring training? If you've never been, it's an especially terrific trip for school age kids as you can get right up to the field and the players, not yet having signed 20,538 autographs, are exceptionally accessible and friendly.

The atmosphere is jovial, relaxed, hopeful, industrious, and natural, all at the same time. In contrast to the Coliseum, which has been corrupted by synthesized and promotional noise, at spring training you are treated to the purest sounds of baseball: The crack of the bat, the peanut vendor, the smell of freshly cut grass (ok that's not a sound), the coaches barking out the multiple infield routines taking place concurrently, the umpire bellowing out (or in the case of Angel Hernandez, guessing) balls and strikes. As Joaquin Andujar would say it is, in a word, worth the trip.

Perhaps some of you who have made the trip in years past would like to share a favorite story, moment, or aspect of spring training. Pitchers and catchers report in 40 days, the first A's spring training game is in 52 days, and I board a plane for Phoenix in 74 days. But who's counting?