Here we go. Let's look at the most polarizing Athletic ever - Daric Barton.

Barton's season got interesting after he was called up after a slew of injuries left Oakland needing a left-handed bat. Below are his numbers from the second half (he only had 23 PA in the first half in a brief fill-in).

Typical Barton - high walk-rate and terrible ISO. But wait a minute! Is that a .301 AVG?! Indeed it is. That OBP got Barton a playoff roster spot and a start in Game 1 of the ALDS.

I will invoke my right of small sample size to delve into the numbers any further.

Will the real Barton please stand up? We all know the story on Barton. Solid end of 2009, pretty good 2010, and then (sound of plane crashing). Is the 2010 Barton still there? Was that real?

Not possible because he never swings - ZING!! Seriously though, I have gotten a lot of requests for Barton and I put it off for several reasons. First, I wasn't sure he would be in the picture in 2014. Second, at first glance I didn't see anything obvious looking at his 2013 swings. Third, Barton didn't have that many PA in 2013 so I really had to dig to find enough swings. But alas. Let's take a look.

Ok. He isn't swinging cross-handed or anything. One thing to note is that Barton hits pretty tall and with somewhat poor posture (slight kyphosis of the thoracic spine... or rounded shoulders). See how at toe-touch and heel plant he doesn't have much bend in the hips. Hip bend is power because it allows hitters to use their legs optimally. So that's some insight into his pedestrian ISO. (We saw Jaso is another with little hip bend - bad ISO. For the life of me I don't know why this isn't given more attention.) Also, hitting that upright makes your swing path very steep from the pitcher's perspective, and not very forgiving. One last thing to note is Barton's bat has nearly zero tip toward the pitcher (the bat looks very tall at toe-touch). This tells us that he has a poor forearm angle and will have a pretty short path. Below are comparisons to Jed Lowrie at toe-touch and heel plant. (Click on the images to blow them up.)

I didn't want to compare his current swing to his glory days in 2010, but I ended up doing it. Below is a comparison.

Not much different. Slightly different stride, but I prefer the newer stride. I looked at quite a few swings to see Barton was a tall hitter in 2010 as well. It looks like his front shoulder function isn't quite as good in 2013 (his hands drift toward the catcher in the swing), but I could be looking into this too much because I know he had right shoulder surgery. We see Barton in the same positions in toe-touch and heel plant in 2010, with the zero bat tip and minimal hip bend.

Looking at his swing path from 2010, it isn't that great. Pretty short (bat starts rearward of his rear shoulder - that's really short), so we get some more insight into the poor ISO. Very steep as well. Barton also has some rearward lean (same in his 2013 swing as well) which can make him inconsistent. 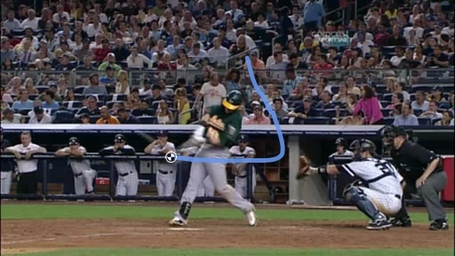 So what's the verdict? I don't see much of anything of great significance different from his 2010 swing from his 2013 swing (or 2012 for that matter). Honestly I wish there was something, but I can't say there is. Barton doesn't do anything awful, but his swing isn't great - no matter what year we look at. Barton does enough small things wrong (rearward lean, minimal hip bend, shrugged shoulders, bad wrist angle, etc.) that when the baseball gods aren't in his favor, he is going to struggle hitting the ball, especially for power. Even when they are in his favor Barton is going to struggle to hit for power. How did he have a decent ISO in 2009-2010? Don't know (the 5 triples in 2010 didn't hurt). But I don't think it is coming back.