Back to the Offseason Homework Assignments!

All Moss did was follow-up his breakthrough 2012 with another mash-tastic season. Below are his numbers.

Moss' defensive metric really brings down his WAR because the bat is some-kinda nice.

Moss' season line is dragged down somewhat by a poor month of May (wOBA of .264). Considering he was helping with a newborn, it is understandable that his production slipped (something I can relate with).

That about sums-up Brandon Moss.

I think Moss' swing is going to limit him against LHP, especially against guys who can up and/or away. 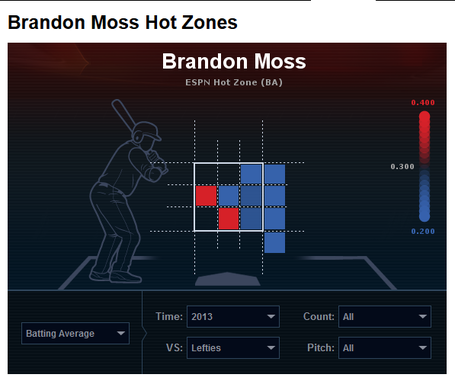 If you have read this, you know I am not high on Moss' swing. Well, at least not the rear arm function. But as we saw last week, Moss' swing comes in at 5 frames and that counts for a lot. We will see in my Part Two of my swing grading series that his rear arm function hurts his swing path, so I wouldn't have predicted him to become a 30 HR hitter. But as I have said before, a lot goes into hitting beyond swing mechanics and Moss is a perfect example. As I said in the referenced article, Moss does have a good stride and lower body function, which combined with his strength helps him offset the rear arm function. But I still believe he could be more of a complete hitter - especially against LHP - if he improved his one swing flaw.

Anyway. Enough of that. Let's just set back and watch Moss simply KILL one. This bomb is the longest home run any Oakland player hit in 2013 - good for 449 ft.

The swing instructor in me says Moss' swing flaw will catch up with him, and it indeed might. But the A's fan in me says just keep doubling down on a hot streak. I am predicting a carbon copy of 2013, basically a .265/.342/.540 slash line with 31 HR.