All The World's A Stage I'm Going Through

Share All sharing options for: All The World's A Stage I'm Going Through 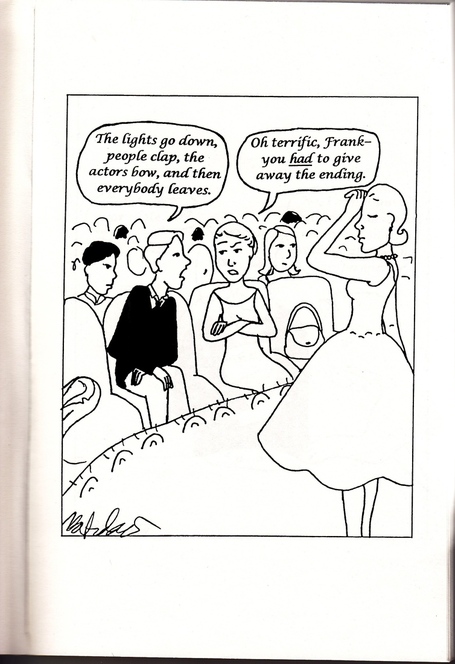 The great thing about a baseball season is that no one ever gives away the ending. Literally anything can happen, except for the things which obviously can't. In 3 weeks, pitchers and catchers will report and AN will be there to bring you all the exciting action:

If my inside sources are accurate, 421 players will be arriving to spring training in the best shape of their life. Meanwhile, Bartolo Colon will be in a shape known as "still technically oblong," and Pablo Sandoval will have lost 30 pounds, 7 of which will actually show up on the scale.

Then, early in the Cactus League season Bob Melvin will formally announce that Dan Otero is his "5th inning guy" for closing out games where Jim Johnson, Sean Doolittle, Luke Gregerson, and Ryan Cook are all available. Eric O'Flaherty will then be described as someone "who will be impacting the 4th inning before the All-Star Break".

OK I should probably write something relevant.

But first, let me rail on pedestrians who text while they are walking -- such as the 1,500 who were treated at Emergency Rooms, in 2010 for walking-while-mobling related injuries. We have a scientific term for these people and it's: "natural selection". How am I supposed to drive safely when pedestrians are walking across the street looking down at their mobile device, often also plugged in so they can't hear traffic, and for all I know Justin Bieber could be driving somewhere near me? How can I expect to get from point A to point B without crashing into something? This is the very question I'm posing to my car insurance company. In unrelated news, I have discovered a product that really does a great job of getting blood off of your fender. If you want to know more, text me. FROM HOME.

Now a paragraph that comes completely out of left field...Assuming he stays healthy throughout spring training (knock on left-hander Travis), Yoenis Cespedes figures to finally break an A's streak of having a different LFer start on Opening Day every year since 2000. That's really pretty remarkable when you think about it. The A's have trotted out a different Opening Day LFer in each of the last 14 seasons! The last repeat? None other than phenom-turned-"had a few good seasons" Ben Grieve, who started in LF on Opening Day in both 1999 and 2000.

Can you name the A's Opening Day LFers from 2001-13? You don't have to because I'm about to list them. But if you're feeling bold, possibly even italicized, don't look ahead and first see how many you can name without peeking. Or if you do look then you should duck -- not because I'm about to throw something at your head but rather because then you can at least be "peeking-duck". Good luck!

How did you do?