The "Every Game In April Matters Just As Much Too" Dilemma

Share All sharing options for: The "Every Game In April Matters Just As Much Too" Dilemma

It's hard, as a fan, to watch your team's manager do anything but give his team the very best chance to win. Yet managers know that the 162 game season is a marathon and not a sprint. You can't always go to your best relievers or they will tire, and you have to keep all 25 players involved or they will atrophy.

Of course in the September throes of a tight pennant race, suddenly you see managers starting to play it a bit differently. At the end of the 2012 season, Grant Balfour appeared in 5 consecutive games as the A's caught and passed the Rangers. At that point, of course, Bob Melvin knew exactly how tight the race was and how important each and every win was to the A's chances of winning the AL West.

Here's where many fans are bothered when a manager does not manage with the same urgency in April. The 2012 season showed, as vividly as any season, how important each and every win can be. Seasons really do sometimes come down to one win and the 2014 campaign has, on paper, the makings of a tight "anybody's" race between Oakland and Texas -- and possibly LAA if you ask some of the pundits.

Wins in April, May, and June count every bit as much as the ones at the end, and this is true in late April, in some random game when the A's might trail 5-4 in the 7th against a team with a vulnerable bullpen and Melvin has to choose between Luke Gregerson and Jesse Chavez. Or in late May, when AJ Griffin is working without his best stuff and the A's trail 4-3 in the 3rd and Melvin has to decide whether to try to get a couple more innings from his starter or punt early and ask his bullpen to throw 6+ innings.

There are "winnable games" but there are also games you can still win. And if at year's end you find yourself one game back of Texas, then the one you didn't snatch in early May and the one you punted in June are every bit the culprit too.

If it sounds like I'm making a case for Melvin to play each game throughout the season as if the season might come down to a single win, I'm not. In fact, I am a proponent of the opposite approach. Even if you know that each win or loss could be "the one" you still cannot manage that way. You have to view the long season as the marathon it is, you can't always go to your best guys, you have to keep everyone on the roster "current" as Melvin likes to say, and you have to remember that every team, every manager, will simply have some games get away from them.

Naturally this isn't true if you have the knowledge that 160 games are behind you and the standings are still tied. At that point you would be foolish not to play with the urgency of a 2-game season. As fans it's hard to have perspective, patience, and the discipline to say, "That hurt, but it's a long season and you just can't play every game like it's the 7th game of the World Series."

And to be fair to fans, not only is it difficult not to view each game with an unhealthy urgency it is also not necessary. Luckily, fans do not make managerial decisions and can be as knee-jerk and irrational as they wish to be. Hence the term "fan" which comes from "fanatic" -- something I don't especially want my doctor, plumber or financial advisor to be, but it's appropriate for those who root passionately for a sports team.

That being said, throughout the various ebbs and flows of the 2014 A's season -- and there will be ebbs and there will be flows -- I think it's healthy to remember that while "every game in April matters just as much as a game in September," it's also true that every game in April matters just as little. A season is not made from any one game. A season is really made from 162 "one-games" strung together to form a pattern, a trend, in some ways a journey or odyssey.

For reading this far, here's a cartoon. 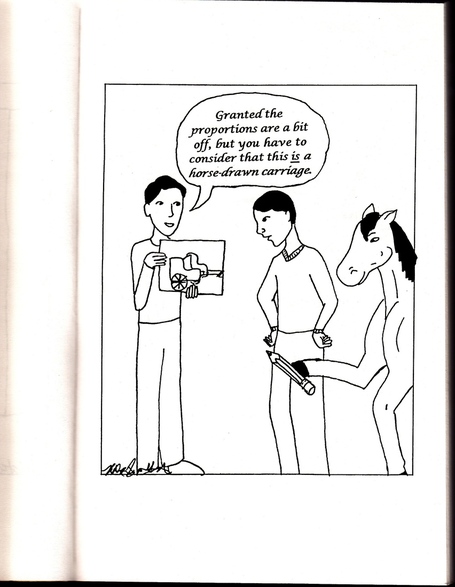 Well I thought it was funny.