Everything I Know, I Learned From The DMV

Share All sharing options for: Everything I Know, I Learned From The DMV

Now the last thing I would want to do is to disparage the DMV. OK that's not true. In fact it's not even close to true. The DMV has been great fodder for ridicule for so many years with its long lines and bureaucratic thinking. Now you can make an appointment with the DMV and bypass the long lines, but fear not: The DMV is working hard to make sure we can still use them as a -- pardon the expression -- vehicle for satire.

I am about to show you a page from the DMV "California Driver's Handbook" that drivers are asked to read in order to prepare for the written test. In this useful manual, you can learn that it is advisable to yield to pedestrians rather than running them over, that left turns are best attempted from the left lane, and that you should never attempt to make a U-turn if there is considerable fog and you also happen to be in your living room. In these regards, the handbook appears to have been written by Captain Obvious.

Then at other times, it appears to be written either by someone with poor command of the English language, a 6-year old taking dictation from a drunk sorority girl, or quite possibly both. Take a look at the page below, specifically at the bullet point I have circled. 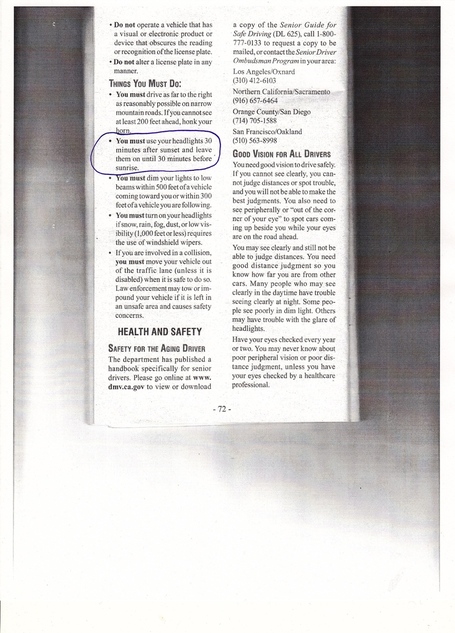 Yes, it really says that. Imagine being a new driver and earnestly trying to follow the handbook -- your battery wouldn't last long.

Speaking of driving, before we get to baseball let's segue into this week's cartoon. 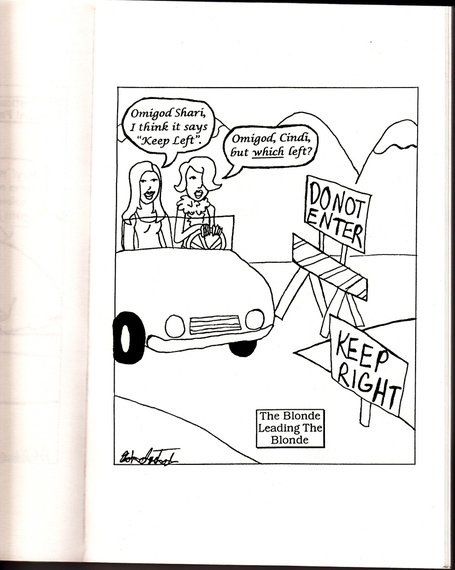 I don't mean to offend anybody, by the way. I just figure it's ok because the blondes probably won't get it anyway.

So all around them, the A's division rivals are banking on the wisdom of long contracts to help them pass each other, and the 2012-13 reigning AL West champion A's, in the standings. And by "wisdom" I mean they're just hoping these deals won't completely come back to bite them in the glutes, because that's what almost always happens. And by "almost always" I mean pretty much always. When was the last time a team offered a deal of 7-years or more, and at the end of it could say, "We're glad we did that"?

The Angels offered Albert Pujols a 10-year deal and two years into it are already full of regret. That's why they got wise and only committed 5 years (and $125M) to Josh Hamilton, a deal they also already wish had come with "takesies backsies". Now the Mariners have offered Robinson Cano a 10-year deal, while the Rangers have answered by trading for Prince Fielder and signing Shin-Soo Choo, each under contract through the year 2020. (Now that's a great year for hindsight!)

Thing is, history is not on these teams' side. Other long (and of course expensive) contracts were handed out to Alex Rodriguez (10 years), Mark Teixeira (8 years), Alfonso Soriano (8 years), Carl Crawford (7 years), Adrian Gonzalez (7 years), and Barry Zito (7 years). The jury is still out on some of these deals, but with the possible exception of Gonzalez (who has been, for $21M/year, a healthy, .800 OPSing, good-fielding 1Bman for the past 2 seasons), the players I have mentioned are all looking, so far, like regrettable to highly regrettable commitments to players who haven't lived up to their contact and are now only getting older.

And here are the A's, whose only commitments for 2015 are Scott Kazmir and Yoenis Cespedes. The 4-year contract given to Cespedes, the longest commitment since Oakland gambled -- and rolled snake eyes -- on a 6 year, $66M extension for Eric Chavez -- was for only $36M. Not the $240M promised to Cano, the $130M promised to Choo, or the $24M annually due Fielder.

It's kind of stunning how the A's have managed to put together the best club in the AL West for 2 years running, while steering so clear of multi-year commitments. My question to you today is: What do you think has been (or will turn out to have been) the best deal, so far, for a team committing to a player for at least 7 years?

As you peruse the choices, you will see why Billy Beane steers clear of these long-term contract commitments -- it's not just that he often doesn't have the payroll to work with, it's also because those deals, even if you can afford them, usually turn out to be a losing proposition.