Final details for our big day on Sunday.

Share All sharing options for: AN Day, Sept 8: Final Details

First off, here is the final list. I have 50 tickets, and this is who they are going to:

Note: Maylai's +1 isn't coming, so anyone who wants a last-minute ticket should buy the extra one from her!

People with asterisks next to their names have already sent me the extra $7 per ticket for the seat upgrade. Many more of you have pledged to give me the extra cash at the game, which is fine. Hopefully most of you will pitch in so that I'm not left with too big of a bill!

Next is the tailgate. Here is where we are going to meet, starting at 10:00am: 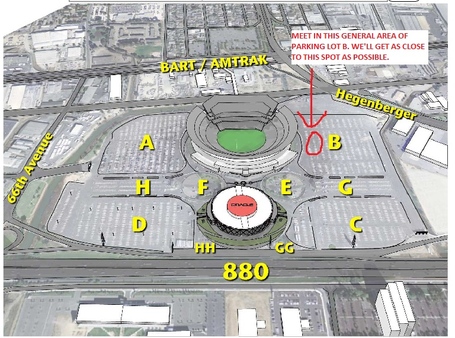 I expect this to work potluck style. Many of you have offered to bring various kinds of food and drink, but the more the merrier, so bring something along even if it's just something small for yourself! Looks like Tutu and Mobius are bringing stoves to cook on, but don't let that stop you from bringing another one (or a grill) if you were already planning on doing so. I also hope that at least a couple of other people will be driving and parking in the lot, so that we have some cars to congregate around and to leave any stuff that we don't want to bring in (food containers, leftover alcohol, etc.). Maylai is also bringing name tags so that we can all identify ourselves!

One other cool thing will be happening tomorrow morning. With AN celebrating its 10th birthday in November, Blez is putting together a Happy Birthday video for the site. There will be special guest stars to be named later (in the video, not at the tailgate), but he wants to get some community members in there wishing happy birthday as well. If you want to ensure that you get in the video, then be there by 10:30 -- the video guy will be arriving shortly thereafter.

I look forward to meeting everyone tomorrow! Remember, even if you didn't buy a group ticket with us, you're still welcome at the tailgate, so come say hi if you're going to the game!