Second part of the in-depth analysis of Chris Young's struggles in Oakland.

Last week I presented my case that Chris Young's struggles in 2013 are beyond simply awful luck and more of a function of how Young is swinging the bat. As evidence, I referenced his career high strikeout percentage, poor batted-ball profile, and really poor performance on fastballs. Now I would like to show some video to provide insight why he isn't swinging the bat as well.

Notice anything different? Look closely. Still nothing? Ok. Let's look at how he finishes his stride in both swings.

I see two small, but significant differences. First, Young is striding more toward the first base side in 2013. Second, his bat is much more flat at toe-touch compared to before (notice the green line). Here are a couple more comparisons from 2011 and 2010 to show that I am not just cherry-picking a single swing. The pattern is pretty consistent in 2013.

Allow me to explain a little on each difference. First with striding toward first base. When I saw the difference in the strides, I thought two things: Young probably isn't pulling the ball as well and is having trouble on the inside pitches. Sure enough, Young's wOBA on pitches pulled is down 51 points off his career average. That is a lot of cheese for a predominately pull hitter. Now take a look at Young's heat map. 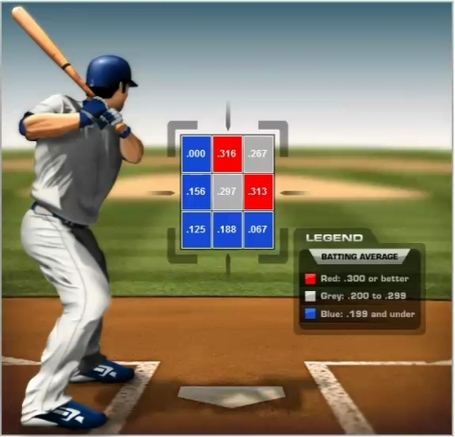 On the inner third, Young is really, really struggling. On high and tight, he hasn't gotten a hit all year. Not one hit. In Ted Williams' great read The Science of Hitting, he spoke of how a hitter MUST command the inner half. I think we can imagine Williams would have issues with Young's heat map. Basically Young is restricting his hip rotation ever so slightly, and is getting beat inside. And getting beat badly.

Now for the green line. In technical terms, it is beneficial for a hitter to get the bat nearly vertical (from the pitcher's perspective) to start the swing. Once the bat gets flat (a la Josh Reddick) as in the 2013 position, the bat has inertia away from the hitting zone. Therefore, we want the bat to be moving into the position Young is showing, not starting there (I will probably do a future article on what I call launching the bat). Also, a vertical bat position recruits the muscles of the upper back, allowing hitters to use more of their body. (Interestingly, in 2012 Young suffered a right shoulder contusion to sideline his hot start. More than likely, he limited the rear shoulder movement while rehabbing the injury then never added the movement back.  When did Young's performance against fastballs begin to drop? 2012.) In more coach-speak, Young has shortened his swing. But possibly he has shortened it too much.

Now let's return to our swing comparison. Here is the contact position (click on the picture for a bigger view.).

See how in 2011, Young has cleared his hips just a little better (we can see less of his left side belt loop). His shoulder turn is more complete, pulling his front arm closer to his body (his lead elbow is over his belt buckle in 2011, over his right hip in 2013). Young's rear arm is much tighter to his body in 2011. The result: the bat gets through the zone just a fraction slower, causing him to hit the ball more toward the handle of the bat, unlike the swing in 2011 that is pure sweetspot. Just a little off, which causes the ball to die at the wall, which gives that jerk LAstro a chance to rob him.

It's important to keep the swing differences in perspective. On one hand, the changes aren't that drastic. It isn't like he is trying to hit from the left side. When Jose Veras of the Astros flips a flat 77 mph pitch up there, sure, Young can hit it out of Minute Maid Park. On the other hand, against difficult pitching, he is going to have a more difficult time than before making solid contact. I believe he isn't quite getting the same power out of his swing as before, which will result in more outs on balls that would have been hits. (Just for fun, check out the list of guys Young has homered off this year here. With the exception of Jon Lester, these guys are not going to be getting a lot of Cy Young Award votes.)

Ok. I have presented a ton of stuff that you may or may not agree with. And that's fine. Since April, there has been nothing on AN except "Chris Young is just the victim of really bad luck this month. His numbers are bound to come up." I am just presenting a case that Chris Young's 2013 performance is largely a function of swing differences from his career norms. I find it more likely these swing differences are affecting his K%, batted-ball profile, and ability to hit fastballs more than just bad luck.