Contextualizing Addison Russell: Is It Safe To Buy In?

A's prospect Addison Russell is getting a lot of hype, though there are a few red flags. Should we worry, or will he live up to the acclaim?

Share All sharing options for: Contextualizing Addison Russell: Is It Safe To Buy In?

Maybe it's just me, but I find it awfully difficult to be totally at peace with A's prospects these days, at least when it comes to projecting them as superstars. Here are the A's players who have made the Baseball America top 50 since 2000:

How many of these guys became real impact players? Almost all of the biggest successes are pitchers — Mulder, Zito, Anderson, Cahill, and Gio. Cahill never really lived up to his top-15 prospect billing, though, and Anderson's promise has been somewhat compromised by injuries.

But on the hitting side? Carlos Gonzalez worked out, but not with Oakland. Barton and Taylor really haven't worked out, Crosby and Buck ended up mostly busting, Swisher was good, but hardly a star, and Cespedes is a semi-star, though he wasn't really a "prospect" in the first place.

In sum, the A's haven't really developed a star-caliber player, especially a position player, since the days of the Big Three. Eric Chavez is the last position player who's held star status for a multi-year run, really. That's a while back, obviously.

So I'm a bit jaded with A's prospects as a result. You can attribute the dry stretch to either bad luck, bad drafting, or bad player development, or some combination of the above, but it's tough to not keep the attrition in the back of your mind when you hear about Addison Russell's exploits.

Russell is, of course, a near-consensus top-15 prospect at this point; many evaluators put him in the top ten. The last time an A's position player held that status (Pena in 2002), Moneyball hadn't been published. So maybe he'll rise above that. But should we expect him to?

If you're nervous about Russell due to the string of A's position prospects coming up short, it's not too hard to find reasons to be skeptical. The first is that he struck out 23% of the time this season in High-A, 116 times in 107 games. Promoted to Triple-A to finish the season, he promptly went 1-for-13 with 9 Ks.

Second, while he did hit .275/.377/.508 this year, those numbers came in the California League, a notorious offensive environment. Miles Head hit .382/.433/.715 in Stockton last season; he's since hit .241/.307/.345 in Double-A, just for an example of how dramatically depressed a player's statline can get when leaving Stockton for Midland. Not that it will happen to Russell, of course, but one can see him losing some power and BABIP while swinging and missing too much when reaching the Double-A level.

In fact, Russell's only really played 29 games in non-inflated environments in his career (between short-season-A and Low-A last year), and in those games, he has just a .153 Isolated Power and one home run. In the other 136 games he's played (AZL, High-A, and the three Triple-A contests), he has a .241 ISO and 23 homers.

Further, his BABIP keeps dropping at every level:

So, it's not like there are no straws for the cynics to grasp at. But we can play this game forever. On one side, we can cite the great numbers, the youth, and the position. On the other, we can cite the strikeouts, the offensive inflation, and the general attrition of prospects. But he doesn't just strike out a ton; he also walks a lot (12.1% this year). But his walk rates have been inconsistent in his career and it wouldn't be a surprise for them to drop significantly in Double-A. And the point/counterpoint goes on and on and on, to the point where there's really little use to it.

A more analytical approach is needed if we are to decipher exactly how good Russell will be (or, conversely, how much worries are justified). We need context. How do comparable players fare?

For this purpose, I just want to focus on how good of a hitter Russell might be. There's some debate surrounding what sort of defensive player he'll be, as well, but the consensus is that he'll either be a decent shortstop or a good third baseman. There will be some defensive value there. So if he hits, he'll be good. Offense is obviously easier to quantify, too, especially when we're talking about minor leaguers.

So how do we get at projecting Russell's offensive potential? First, we have to acknowledge probably the most significant of all the numbers associated with him — 19. That's his age, of course. Obviously, every prospect is 19 at some point (though not always in pro ball at the time), but the significance of Russell's age is that he spent the year in High-A. It's not exactly common for players to do that — Russell was the third-youngest player to see significant time at the High-A level this year (Corey Seager and Rougned Odor are marginally younger). Russell's performance is especially impressive considering his age, even if the strikeouts are a bit high and the environment is high-offense.

I want to look at three components of offensive performance: walks, strikeouts, and power production (which I'll use Isolated Power for). How well do a 19-year-old's High-A walks, Ks, and ISO predict his major league offensive output?

In order to get at this, I had to narrow the sample of "all 19-year-olds in High-A" to "all 19-year-olds in High-A who made it to the majors for fairly extended period of time"; obviously, including guys who never made it up or just picked up twenty at-batswould skew things. Sure, it might be a tad presumptuous to assume Russell will see extended MLB playing time, but as iffy as the A's hitter development track record is, it's not like we've seen many of their top prospects miss the majors entirely.

I looked at all High-A players from 1989-2009 and found sixty-seven 19-year-olds who got at least ninety MLB plate appearances, which is a bigger sample than I was expecting to get, so the analysis can be a little more sound. I then ran a regression on their strikeout rates in High-A vs. their MLB wOBAs, and was quite surprised to find this: 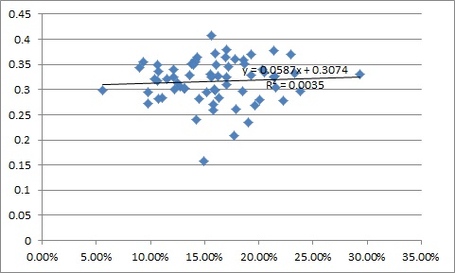 There is essentially no correlation between the age-19 K-rates and MLB offensive output. I don't know about you, but I find that quite surprising. There are any number of ways to explain this, but they're all just educated guesses.

It is worth noting that Russell's 23% K-rate is still unusually high — only four of the 67 players had strikeout rates of 23% or higher. Only twelve had K-rates of 20% or higher, in fact. Still, it's not as though that group was entirely unsuccessful:

Obviously, I think we'd all be thrilled if Russell developed into the sort of offensive force that Lee or Stanton were/are. Beyond them, you have a couple of rather interesting broad comparables for Russell in Jhonny Peralta and Ian Desmond, who both have had some excellent years and some troubling years on both sides of the ball. Just a bit down the list is another player who fits that bill — Asdrubal Cabrera (19.3%). It wouldn't be thrilling to see Russell have Desmond/Peralta/Cabrera-like output, but he'd hardly be a disappointment either. There's also Adam Jones, who's had his moments offensively but is perhaps a bit overrated. Even Betemit, Hollandsworth, Blanco, and Nieves were somewhat useful players. The only real busts of the group were Marte, Pie, and Hernandez, the latter of whom never had much power and is thus a poor comparable.

I'm not sure exactly what to make of this finding regarding its validity. Obviously, there are some issues with the data — some players are still playing and haven't experienced the downside of their careers, K-rates have generally increased from 1989 to the present day, so there's some era-bias, the sample isn't that large, injuries are a factor, and so on. Still, it's about as comprehensive an approach as we can take, and it really doesn't produce much evidence that striking out a lot in High-A at age 19 is all that damaging (which might make White Sox fans more excited about Courtney Hawkins, but I digress).

The question, then, is whether this approach yields any correlations, or if High-A statlines at 19 really don't correlate with anything in the majors. How about age-19 walk rate vs. MLB wOBA? 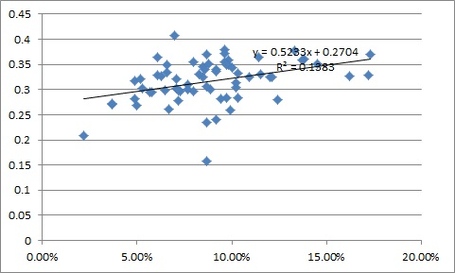 Not a strong correlation, really, but definitely a correlation of some sort. Russell had a 12.1% walk rate this year; while his strikeout rate was higher than almost everyone in the sample, so were the walks, which only trailed eight players. Here are the ten who topped 12%:

You can see that this group is far more uniformly positive than the high-K group is uniformly negative. Obviously, there's Barton, who makes us all twitch a bit (his latest solid run notwithstanding), the huge bust of Marte, and the mere decency of Nieves and Jimenez, but you've got four star-level players (Jones, Ramirez, Sizemore, and Stanton) and a fifth who could've been an elite hitter if he stayed healthy (Johnson). And none of these guys were shortstops. Russell can be a star without hitting like Stanton. 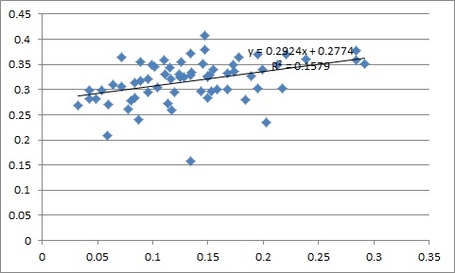 This is a slightly stronger correlation, even if ISO data at the High-A level can be dramatically skewed by whether the player is in the California League or not. Again, Russell (.233 ISO) would rank near the top of the list; only eight players had ISO marks over .200. They are:

Now we're 6-for-8 on star-level hitters, even if the other two — Montero and Marrero — have been sub-replacement level producers. Again, though, both of those guys are on the opposite end of the defensive spectrum from Russell (Montero's nominal "catcher" position notwithstanding). Adam Jones and Derrek Lee round out the top ten (.199 and .195).

It seems that walk rate and Isolated Power are far better predictors of a 19-year-old High-A player's future MLB offensive production than strikeout rate is, which is obviously fantastic news when we have a player who walks a lot, strikes out a lot, and hits for a lot of power. Again, I wouldn't take these findings as gospel, but they really do a lot to disarm the cynicism that the strikeout rate and environment make it superficially easy to grab onto. In conjunction with good reports rolling in from nearly everybody who sees him, this data makes Russell look primed to be the next true star in an A's uniform.