The present looks pretty good in Oakland. Let's take a look at a piece of the future.

With the 24th pick in the 2013 Draft the Athletics selected Billy McKinney. Let's take a look at his scouting report and his swing.

McKinney was drafted out of Plano (Texas) West High School at 6-1 and 195 lbs. He is currently playing center-field, but is projected to slide to a corner field spot in the outfield as he lacks elite speed. MLB currently has his scouting grades as (present/future)

So we see there isn't anything to get too excited about except the hit. Scouts are gushing about his swing. Words like smooth, short (ugh), quick, and refined are often used to describe his left-handed stroke. Now let's have a look at what the scouts are excited about.

Note: The swings I am going to be breaking down are from 2012 showcases and 2013 HS season. I don't have any from his minor league games. (Thanks to Baseball Factory for the video, BTW.) It is possible he changed his swing after the video I have of him but it will at least give us a starting point. I will get some footage of McKinney in 2014 when he comes to Stockton. Also the swing for main demonstration purpose is a batting practice swing. I am using it because it is the best video (quality, angle) I have of him and his BP swing looks identical to his game swings. 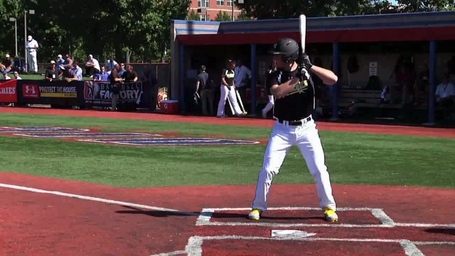 McKinney stance is pretty standard. Not much to report here. 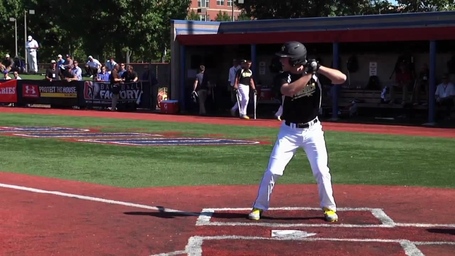 McKinney does a movement I call "gaining control of the stride with the rear leg" very well. It is a subtle but important movement, more than just rocking back. 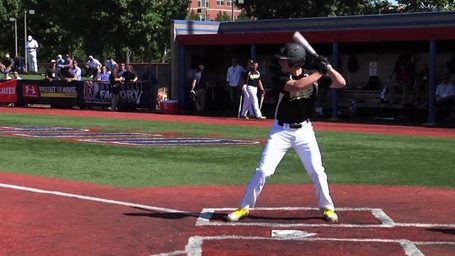 There is a growing trend in HS baseball to take a jab step stride, and McKinney is showing it here. Basically it is getting the front leg out in front of the front hip and down early. I am not a fan of this movement, as it doesn't set up the legs well. Besides that, McKinney has a pretty narrow base and not much inward coil of the front leg. I wish he got a little wider with more hip bend so his legs could work more. 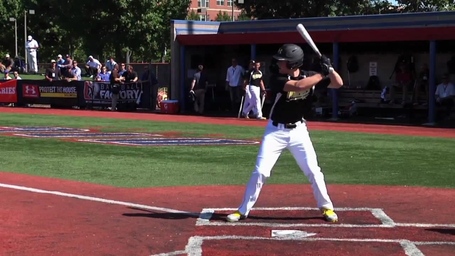 Usually heel plant is the initiation of the bat swing, but not for McKinney. 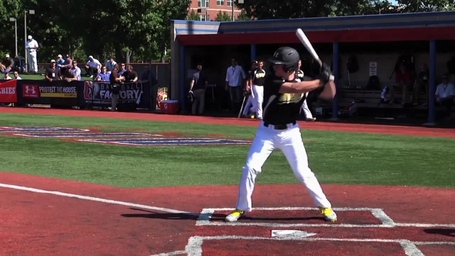 This is a little interesting. Most jab-steppers (Choice, Russell) perform an inward coil with the front leg after the initial heel plant. McKinney does a lateral hip drift. Notice his front heel is off the ground, yet his rear elbow is starting to work down. McKinney doesn't have much of a "load" with his upper body, but I like the way he initiates the swing. The big takeaway from this frame is that his swing sequence is top down, upper body driven. 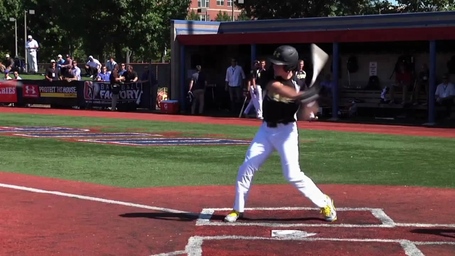 McKinney gets his front heel down, but well into the swing. His upper body function is really nice. His front shoulder is working beautifully (he has the best front shoulder action I have seen compared to Choice or Russell). Again, we see his upper body is really driving the swing with the lower body along for the ride. Compare the hip rotation at this point in the swing to Donaldson (click on in it to blow it up). Hip drive IS swing power. 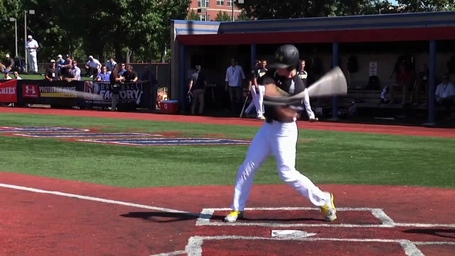 Pretty nice here. Maybe a little steep, but that is a function of his narrow base. 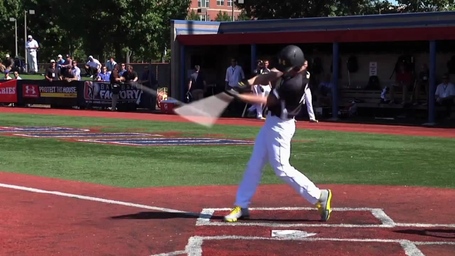 In viewing McKinney's video, I noticed he really likes to hit the ball way out in front of the plate. That makes me a little nervous, because it makes his contact window a little small, especially when pitchers start mixing speeds. 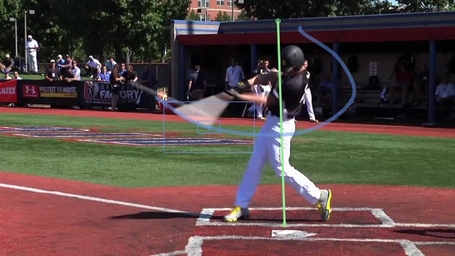 McKinney's path is pretty compact, maybe to a fault. I would also like to see the upward portion of the path start earlier. His head does work a little rearward, simply because of the hip drift and that he likes to make contact out front. I prefer Donaldson's path, but then again I prefer Donaldson's swing to anybody. 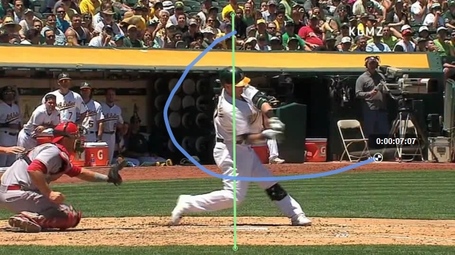 Upper body function. Really, really nice. Other than getting the rear shoulder involved during the stride (would help his path), I don't have any complaints about his upper half. It is hard to get a feel for his swing time due to his multiple heel plants, but it looks to be 5 or 5.5 frames, which is good.

Stride and lower body. If he had just a little longer stride with a little deeper hip bend, his hip rotation would improve. I would like to see him smooth out his swing sequence as well. We can see these movements are consistent in live swings as shown below.

Pretty nice for 19. I am not quite as enamored with McKinney's swing as others, but I am admittedly a pretty difficult critic. It's not so much that he has major swing flaws, simply there is more he could do in his swing to add swing power. There isn't anything in his swing to keep him from reaching the big leagues, just I would love to see him use his lower body as well as he uses the top half. For him, I don't believe adding swing power would cost him bat control. If anything, it would allow him to wait a fraction longer to adjust better to off-speed stuff.

I would feel much more comfortable if he could profile to stick in CF. Since he doesn't use his legs very much and isn't expected to add much too his frame, it is hard to see him becoming a 20 HR guy. I would say 15 (max) is a better number, especially in Oakland. I won't venture a guess on AVE until I see more game swings and minor league stats. Athletics Farm has used Mark Kotsay as a comparable player, and I agree with that.

I'll take some footage of him next year in Stockton and do another round of analysis. Until then, what do you guys think?