For most of 2013, Ryan Cook was an integral piece of the A's bullpen. In the first half, he was utterly dominant, posting a 22.4% K% and a 7.5% BB%, good enough for a K/BB ratio of 3. But in September, Cook has basically imploded. For the month of September, Cook has got a pretty unsightly ERA of 7.11, and more importantly, he's walked 6 batters in the 6.1 innings he's pitched. What's strange, though, is that for the month he's actually got a K% of 25%, which is pretty darn good and significantly better than his numbers in June, July, or August, when he was lights-out. Clearly, something strange is going on with Ryan Cook. What gives?

The following graph follows Ryan Cook's usage of different types of pitches over the course of this year. Each data point represents a month. 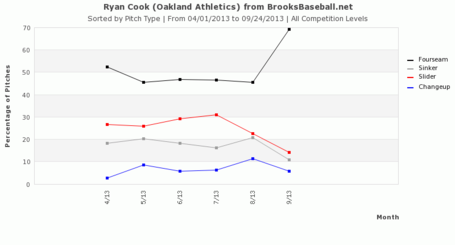 See anything interesting? I do! In September, Cook started using his four-seam fastball about 70% of the time, whereas for most of the season he'd been using it less than half the time. At the same time, his usage of all of his other pitches declined significantly, especially the slider.

FanGraphs has a cool function that allows you to see the specific values of different pitches. It tells you the runs above (or below) average produced by each type of pitch. Ryan Cook's fastball this year has clocked in at -1.1 runs, meaning his fastball has been slightly below average. His changeup, on the other hand, has been worth 0.5 runs- meaning it's basically a league average pitch. He's made his living on the slider- his slider has been worth a whopping 7.9 runs above average.

To be fair, Cook's slider has been a bit off in September. From April through the end of August, Cook threw his slider for a ball 34.14% of the time. In September, though, it's missed the strike zone exactly 50% of the time. If he can't hit the strike zone with the slider, it becomes a much less useful pitch. Falling behind in counts means more fastballs, which for Cook means more inferior pitches. The fastball, of course, is very important for Cook, but it's mostly there to set up the slider. If he can't find the strike zone with his slider, he doesn't have the fastball to beat people by overpowering them. The velocity may be there, but the results with it haven't been.

The key for Cook is to get his slider back up to snuff. If he can consistently throw it for strikes, he's one of the more dominant relievers in the league. The slider is absolutely filthy on its own, and it sets up the changeup and the fastball as well. But if Cook can't find the zone with his slider, it means that hitters can sit fastball and tee off. Pitching, of course, is all about sequencing and trickery. You can't just throw your best pitch every time and expect hitters not to catch on. But right now, Cook's best pitch isn't a weapon. If he can regain his confidence in the slider to the point where he can get it back up to a 30% usage rate, it will work wonders for him. Let's just hope he gets it back on track in time for the playoffs.