Check out how several Athletics hitters perform a key component of the swing. And it might help your softball swing.

A couple weeks ago, I showed how I didn't like how Chris Young performs a piece of the swing I call launching the bat. I thought I would spend some time explaining it in more detail.

Our perfect example of launching the bat is Josh Donaldson. Watch the video below a couple times.

Notice how Donaldson works the bat pretty much vertical (from the pitcher's perspective) at the end of his stride, then launches the bat onto the plane of the pitch. Then kills it. Just awesome.

Here's why this is important. Allow me to give a brief physics lesson. We will only consider the 2D plane from centerfield view. Below is a right-hander's bat shown at an angle relative to the ground. The bat has a moment of inertia based on the angle. This moment of inertia, or torque, wants to make the bat fall to the ground behind the hitter. This is bad, because the torque will take the bat away from the hitting zone. But if the angle goes to 90 degrees (bat purely vertical), the torque goes to zero. 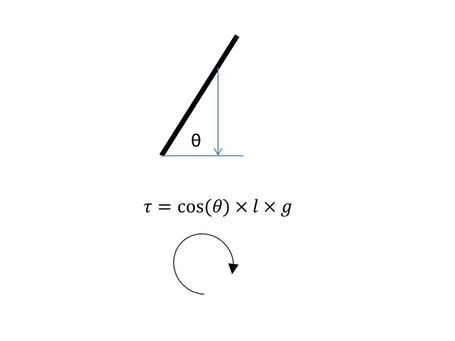 We want the unwanted torque to be zero, but we have to put the bat on plane with the pitch. And when we do that, we have the unwanted torque. What to do? Simple. We want to start the bat at the vertical position, then get it through the "bad zone" as quickly as possible.

Here is where I have a slight problem with typical coach-speak. Talk to any hitting coach (except me), and they will tell you about the value of having a short swing. Well, Donaldson doesn't have a short swing. He could shorten his swing by simply starting his bat from the plane of the pitch. But that would be like starting a race in the mud. It is hard to get speed going. See below.

Now, if we stand back a little bit and start from a better position, we have some speed entering the mud and can get through it faster and have more speed at the finish line. A longer path, but quicker path. Longer distance in same (or less time) equals more bat speed. See below.

(Moving the bat into the vertical position also engages the muscles of the upper back and rear shoulder. I will save you the explanation on that one. Grab a bat and you will feel what I am talking about).

Here are some Oakland players who perform this movement well besides Donaldson.

I am not crazy about everything Moss does in his swing, but he does start the bat in a good position.

Cespedes holds the bat a little high at the end of his stride, but does launch the bat pretty well.

Jed Lowrie launches the bat pretty well from the right-side, but could improve a little on the left side.

Now for some Athletics who could improve on the movement.

Chris Young. As I showed earlier, Young isn't performing this movement as well as he has in the past. At 180 lbs. he needs to get everything out of his swing.

Nate Freiman. Terrible. Despite his big frame, Freiman hasn't shown much power. I believe this is part of the reason.

I don't think it is a mere coincidence that the players who perform the movement well have higher values on wFB (weighted fastball values) than the players who perform the movement poorly. In fact, I have shown here that launching the bat is one of the improvements Donaldson made from early 2012 to 2013. Obviously A LOT goes into being able to hit MLB pitching, and some hitters who don't launch the bat that well still achieve success. But being able to get the bat moving quickly definitely helps.

So the next time Cespedes gets blown away on a high fastball and your buddy says "Cespedes should have shortened up there!" simply say "Why would he want to start in the mud?"