The Secrets of Dot Racing

Meet Matt Shelton. Every half-inning, he is the busiest guy in the Oakland Coliseum. Among many things, he puts the “dot” in Dot Racing.

Share All sharing options for: The Secrets of Dot Racing

There was a time, I swear, when people went to a baseball game and were content to amuse themselves during breaks in the game action. Not that amusement was all that critical. The time between innings was short, barely enough time to buy a bag of peanuts from the sweaty vendor with the metal box attached to his belly.

The "entertainment" was a guy playing the "Greatest Organ Hits of Korla Pandit" over the public address system. The organ music was relentless and ritualistic; it even cued certain necessary functions. Third out, organ fanfare, run to the toilet. To this day, when I hear organ music, I feel an urge to seek out the nearest men's room.

Well, times have changed. (You probably got the tweet.)

Baseball's fervent courtship of the casual fan has led it to build, not ballparks, but elaborate audio-video shopping theaters. One visit to Phone Booth Park will confirm that. Even in the relic Oakland Coliseum, the patrons, casual or not, are bombarded with a choreographed procession of images and sounds, stunts and commercials. The players can't even walk from the on-deck circle to the batter's box without some sort of hip-hop anthem. Indeed, the patrons themselves have become a big part of the entertainment. Wait, what's that I see on the stadium video board? A 12-year-old dressed as a green-and-gold turnip doing the "Bernie!"

My point is, all that stuff-from the ceremonial first pitch to public address announcements to the raging music of Grant Balfour's entrance-has to be organized, edited, scheduled, and cued by somebody. For the A's, that somebody is Matt Shelton, now finishing his second season as the club's Stadium Entertainment Production Manager.

"I have two essential roles," Matt explains. "First, I program the game, what time the National Anthem occurs, what time the first pitch is, all the stuff that happens between innings like Dot Racing and Hall of Fame racing. I write all the scripts for our P.A. announcements. If Comcast wants the game to start at 1:07pm, I have to back-time everything so we're ready to go at 1:07. Of course, then I make sure everything scheduled actually happens.

"The other big part of my job is collecting, editing and building all the videos that you see before the team takes the field and during the game. All that comes out of our in-house production."

Okay, he can do all that, but has he even heard of Korla Pandit?

Everything you see and hear at a game is programmed down to the minute. On occasion, though, Matt gets to inject a fun bit of spontaneity into the proceedings.

"The other day we had the Hall of Fame race," Matt says. "We thought Dennis Eckersley [actually, the jogging replica of Eck] had won the race. We reviewed the finish on video replay and it turned out that Rollie Fingers really won the race by a hand's length. Two innings later, we announced there had been an inquiry about the race results. We showed a replay of the race. Based on the results, we awarded the race to Rollie. Everybody cheered."

Justice was done, but Eck is believed to be highly cheesed at the reversal.

How Matt acquired his job with A's is an interesting and instructive story in itself. At Arizona State University, he majored in broadcast journalism with a minor in video production. While at ASU, he caught on with the Arizona Diamondbacks as an intern and was awarded with 60-hour work weeks as he learned editing for sports. That's weekdays and weekends, 60 hours on top of completing his studies. Indentured servitude, supposedly outlawed, has merely been re-branded as interned servitude.

In Matt's case, though, the sacrifice proved a good investment. His internship enabled him to move into a job with the Dbacks producing their in-stadium entertainment. He was with Arizona for five years. When the A's job opened up, he jumped at the opportunity to come back to the Bay Area.

One problem, he was one of more than 1,000 applicants. Consider those odds and you get some idea of how hard it is to land a front office job with a major league team. AAA minor leaguers actually have a better chance of making the Big Club than most front office applicants.

After running a gauntlet of five phone interviews and one live interview, he was in, no sweat! He succeeded Troy Smith who moved up to become the A's Senior Director of Marketing. He admits, coming from the Dbacks and their state-of-art video system, he had to slow down his production tempo to mesh better with the capabilities of the Coliseum's antiquated gear.

"It was certainly an adjustment," he says. "The Coliseum has the oldest video boards in North America. The system was installed in the mid-1990's and runs on Windows XP and NT."

Matt knows not to expect a Coliseum upgrade to its system any time soon.

"Replacement video screens-we need two of them-would cost $3 million each," he says. "Plus, you would have rebuild a lot of the system to accommodate high definition. Figure the whole project would cost $10 million. The Dbacks put in a new system five years ago for $15 million."

As Matt recites those figures, I feel a little cheap recording our conversation on my $40 Sony. He is philosophical, however. "The system is old but it is reliable," he says. "We know the system's limitations. There are work-arounds and that's just what we do. We adapt."

There is one huge advantage the Coliseum has over, say, Arizona's modern set-up: the control room, high up on the press level of the stadium, has a majestic view of the field. From his perch beside P. A. announcer, Dick Callahan, Matt can actually see and hear the effects of his work directly and in real time. A big job benefit. 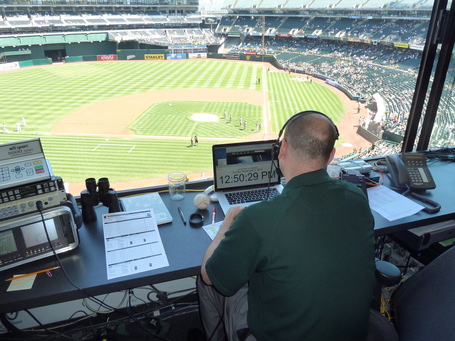 Matt is only one of many who create the stadium entertainment universe. "Everyone on the production team has their own role," he says. "There's a graphics generator, there's video playback, commercials, etc. There are 14 people for the A's in-house production at every game. Comcast has their own people and the visiting team also brings a production crew. For a typical televised game, there will be 14 TV cameras filming the game."

That means, for a Tuesday night game in late April, there might be more people on the production crews than there are in the seats.

Matt is a local boy. He grew up in Martinez and went to Alhambra High School where his parents and his grandmother also studied. His parents still live in the same house in which Matt grew up. He started playing baseball at age five and continued through high school and community college. He and his Martinez buddies used to ride BART in, buy $1 bleacher tickets, watch the Big Three Athletics decimate the opposition.

"After playing baseball and watching those great A's teams, this is the dream job," Matt says. "A good day for me is no production errors, a close game, an excited crowd and Balfour entering in the ninth inning."

And what constitutes a really lousy day in his dream job?

"The worst day in my career was last year, my first with the A's," Matt recalls. "It was late in August. The team was getting beaten 7-2 in the eighth inning. Through the press box came the word that the A's had just traded for Stephen Drew. Since the trade was known to the press, I didn't think anything of it. So we did an announcement in the stadium."

Some good news for the fans during a lousy game, right? Well, maybe. There was one tiny difficulty: the team itself hadn't been notified yet. Bob Melvin hadn't been informed, nor had the players. The first they heard of the trade was from the stadium announcement.

"At least one player learned he theoretically didn't have a job anymore over the P.A.," Matt continues. "I took quite a bit of heat for that one. I didn't know we weren't supposed to do that. So I had to go into Bob Melvin's office the next day and apologize. I had to apologize to Adam Rosales (the guy who was sent down to make room for Drew). Jonny Gomes was upset at me as well."

No kidding. Apparently, Gomes went ballistic, questioning Matt's competence and his manhood and accusing him of all sorts of nefarious activities including the murder of Mr. Boddy in the library with a candlestick. Man, I have had to take lot of crap in my life but a ration from Gomes must be like getting dumped on by Godzilla.

Okay, so what about Dot Racing? If you have gotten this far in the article, you must really be a Dot Racing fanatic. (Gotcha!) The current dot racing is updated from the version I remembered, the red, white, and blue dots zipping around an oval. The A's still have one copy of the old version which they play on Retro Days. "I actually like the old one better than the new versions," Matt says. "One of the things we want to do in the off-season is make some new ‘old' ones."

Believe me, a lot of my money has changed hands during Dot Racing so I ask Matt, "Do you have a system for predicting the outcome of Dot Racing?"

Matt looks cautiously from side to side. He has to be careful since his activities are heavily scrutinized by the California Dot Gambling Commission.

"I don't have a system but I'll disclose this secret," he says. "There are nine [pre-programmed] races in total. There are three winning races for each of the three colored dots, though all nine versions look different. Basically, I try not to have the same color win two days in a row. Sometimes, I'll change it up and have the color win two days in a row. I'm a little superstitious."

Huh? That's it? How am I going to make back my dough with that information?

"Okay, there is one other secret," he says. "The true colors of the dots are still red, white, and blue. But there was a problem with that color combination. If we were playing, say, the Red Sox or the Angels, we couldn't have the red dot win the race. The blue dot always had to win.

"When I got here, I said, ‘Why don't we just change the colors to the A's colors so it doesn't matter?' We're the only team with green, gold, and white. So we just color-corrected the dots to the A's colors. Now, any of the three colors can win at any time."

On such innovations, the world may turn, but I'm still out twenty bucks. Damn!