Brandon Moss: The One I Would Have Gotten Wrong

Due to popular request at AN day, I have bumped the Brandon Moss article up to this week.

Share All sharing options for: Brandon Moss: The One I Would Have Gotten Wrong

(For a little pre-reading reading, check out this great article on MLB.com )

Time for a little bragging! Since I started doing baseball writing, Based on swing mechanics, I have shown

(We will see how my Michael Choice and Addison Russell predictions turn out, here and here.)

One prediction I did not make, which I would have gotten 100% wrong, is Brandon Moss.

When Moss signed with the Athletics on a minor league deal in December 2011, it wasn't greeted with much fanfare. Moss' tenure consisted of a two seasons at the majors in 2008 and 2009 with less than stellar numbers, and two good years (2010 and 2011) in the minors. Even though he showed power potential in the 2011 AAA season with 23 homeruns, the Phillies let him go, no doubt influenced by the 25% strikeout ratio. Phillies general manager Ruben Amaro Jr. remarked "We just don't feel Brandon can hit a Major League fastball."

The rest is history. Moss had a good 2012 spring training, raked at AAA Sacramento, then was promoted June 6 and has been mashing homeruns ever since. Yet on that June day, I would have been more than happy to show you why Moss would not be successful. Here's why.

I would have shown one of Moss' homerun swings.

Then made a few key points. Moss starts with an open stance then strides to the toe-touch position below.

Moss is good, but not great here. He is setting up his lower body really well, but hasn't set up his upper body for much power (I know, just wait).

Here is Moss at lag, or more appropriately, drag position. Brandon Moss has bat drag. Bat drag is getting the rear arm working too early and too dominantly. The check point for bat drag is to see if the rear elbow leads the hands at the rear hip. Bat drag is simply a symptom of an out-of-sequence swing. Basically using all the low leverage body parts first, instead of later when the swing has momentum. Bat drag is the single biggest flaw in hitting a baseball. For instance, the 11-12 year old Little League team I helped coach this last year, 13 of the 14 kids had some degree of bat drag. And yes, the one kid who didn't was the best hitter. Bat drag costs hitters bat speed and especially power. Just look at the position Moss is in. To me, it looks like he is just going to slap it into left field. It doesn't look like there is any way this is going to turn into a 400 ft. bomb.

At contact, Moss has got the bat through, but his power zone is pretty small because of the bat drag. He doesn't get bat speed up until nearly the end of his swing.

Then I would have shown a few more shots from the lag position to show Moss has a consistent bat drag problem. 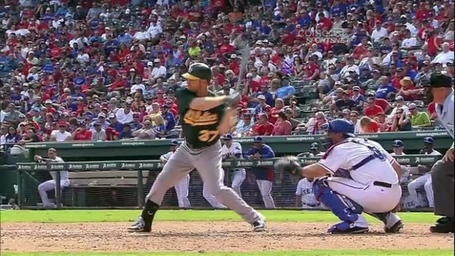 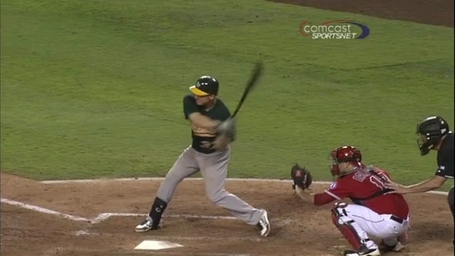 Then I would have provided the following recommendation: Though Brandon Moss displays very good lower body function, the consistent bat drag problem leads me to believe he will struggle against MLB pitching. The rear elbow movement will leave him susceptible to inside pitching, pitchers who can vary speeds (fastball, curveball), and especially against LHP.

Ouch. That would have been bad. Moss has consistently shown the ability to hit inside pitching, eats fastballs for breakfast, has not shown severe weakness to off-speed stuff, and well, the jury is still out against LHP (LOTS of strikeouts, but pretty good power when he hits it).

Now that we know that I would have been wrong, we can try to explain how Moss does it. You might think, "Jerry, maybe bat drag just isn't that bad?" Wrong! It is horrible. Check out Donaldson, Cespedes, and Lowrie in the same position. Much, much better. Bat lag is hitting death. The only other hitter I can think of who is successful with bat drag is (gulp) Derek Jeter (and he truthfully may not have bat drag. Jeter's swing is so funky it is hard to classify). I am not wrong in saying bat drag is bad, but Moss is able to overcome it. Moss is definitely an example of function over form.

One reason is his strength. I have never worked out with the guy, but by all reports he is a pretty strong dude. Another reason is (as I mentioned) his really good lower body function. I always tell hitters lower body function is critical, and Moss definitely makes that point. Another possibility is that Moss is some form of cyborg, simply immune to swing restrictions normal humans fall victim.

I think the biggest reason Moss is able to achieve success is extreme trust in what he does: swing hard. He doesn't beat himself up if he swings out of his shoes and strikes out, in fact, I doubt he cares. Moss is going up there with the sole purpose of blasting the ball into Mt. Davis. He believes in what he can do and does not stray from that. As any hitter will tell you, confidence at the plate is just as important as how you swing the bat.

Does this mean Moss has changed my view on bat drag? Absolutely not! I still blame Moss' swing for hits bouts of streakiness (when the travel or wear or nagging injuries catch up, I believe it will impact his swing more than others). And Moss is definitely the outlier (like Jeter). But I am a Moss believer. I believe he should be hitting 4th against righties, but probably getting the majority of the time against lefties off (I am still not convinced on that one).

I did learn one very valuable lesson with Brandon Moss: Some of your best predictions are the ones you don't make.

Now the question becomes whether or not Oakland should lock-up Brandon Moss long term. I say give him a 3-year deal. (Moss' side bargains up from 2 years with 3rd a club option). Hopefully I will be right about this one.