An in depth analysis of why Chris Young has struggled in his first season with the Athletics.

(Editor's Note: I'd like to introduce EBHI to our front page writers group.  He will normally post on Saturdays, but is making a special guest appearance today.  EBHI is an A's fan since he moved to the Bay Area in 2010.  He is a hitting instructor with emphasis on video analysis and biomechanics, and has already produced some great content over on the FanPosts.  Welcome and keep it coming!  - Alan Torres)

One of the more polarizing moves by the A’s front office in recent years was the acquisition of Chris Young. Some viewed the move as a steal and proof the A’s were willing to take on payroll to improve. Others pointed out that the move added to organizational strength at the cost of organization weakness (and basically Johnny Gomes). Whatever side you were on (I was on the second) there is no debate about the offensive production of Chris Young in 2013. IT. HAS. STUNK. So let’s take a deep look into what and why things have gone wrong.

Here are Young’s stats for every year since he became a regular.

Now for a few points. First, Chris Young has never been an offensive beast. He has only one season of wOBA over .330, so we shouldn’t be shocked he hasn’t been a fixture in the 3-hole of the lineup. Second, Young’s two seasons of above average wRC+ were the seasons he stole 20+ bases. So entering is age 30 season, we can’t expect Young to prop up wRC+ much longer on speed alone. Third, Young has never been a high BABIP guy. His highest BABIP came in 2008 with .300. In 2013 however, it hit a new low of .227, good for 227th place (how convenient) out of 229 qualifiers with 300 PA.

Wow! That explains it. Most of Young’s other peripherals – ISO, HR% - are in line with his career averages, so he must just be the victim of some really bad luck. The A’s should pick up the option on his contract next year because he is due to have a rebound. Not so fast. Maybe there is a reason why the BABIP is so low.

By examining his batted ball profiles, we can see why Chris Young is not a high BABIP guy.

Here is one more insight gained by looking at his batted ball profile.

Holy Toledo! Young is giving up 85 points on ground balls and 67 points on flyballs! How can this be? Bad luck, right? How about another theory. At the latest SABR conference, BIS presented a study on batted balls with respect to the speed at which they were hit and the outcome. The results are quite interesting. Take a look at the plot for ground balls. Basically the harder you hit a grounder, the more likely it is to be a hit (the league leader in GB velocity was Miguel Cabrera who maintains a high BABIP). And high choppers and slow rollers become hits if you can beat them out. Is it possible Young is a victim of this graph? Is it possible he isn’t beating out the slow ones and isn’t hitting the ball as hard to get the hits on the right side of the chart? For the flyballs, he his hitting more IFFB and is playing in the Coliseum, so the drop isn't that big of a surprise. 151 on FB is actually above league average. 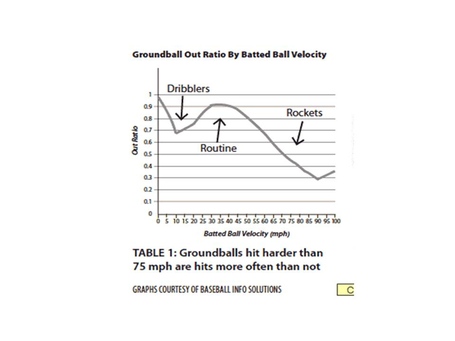 Interesting. For the left half of the chart, I already mentioned Young isn’t getting any younger, and speed doesn’t age well. Also in 2013 he has fewer infield hits (3 in 2013, 3!) and stolen base attempts than career norms. So I think it is safe to say he getting less out of the left side of the graph than before. For hard hit balls on the right side of the chart, we can estimate this effect by examining batspeed. And a good way to examine batspeed is how hitters do against fastballs. Below is Young’s profile for his career.

Here we see that Young has struggled against FBs in 2013 more than any point in his career. Which is really bad. Take a look at the following plot on the relationship between performance on FB and wOBA (This is a pretty good fit). 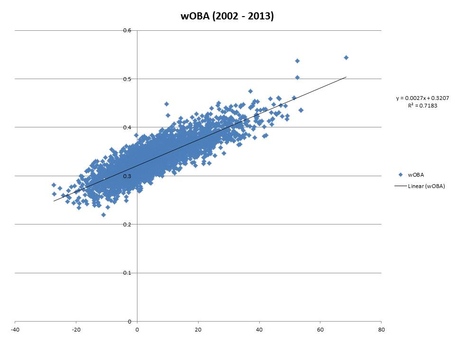 Do crappy against fastballs and you will suffer (the same goes for Reddick and Cespedes).

To summarize, there are reasons to suggest why Young is struggling in 2013 beyond just saying he is the victim of bad luck. A decent portion of his offensive is based on speed, which doesn't seem to be improving. Plus, Young can't steal bases if he never gets on base. Young is prone to seasons of poor batted ball profiles, and he is definitely having one this year. And maybe he has lost a little batspeed to help square up fastballs and get those 50/50 balls through the infield and into outfield gaps. Next time we will look to see if there is something in video where we can see a difference in his swing to affect his performance (spoiler alert: there is).