How can a pitcher's inability to produce consistent results actually help a team?

Share All sharing options for: An Undervalued Commodity: Pitcher Inconsistency

One thing that most people agree is a generally desirable trait in an athlete is consistency. A perfect baseball player would be able to reproduce results over and over- and that's a good thing, assuming the results are good. I was a very consistent baseball player in high school- I batted .000, but gosh darn it, I did it every time! Ok, so maybe you wouldn't want me on your team. But I think that we can all agree that for people who actually play baseball for a living, you want reliable results.

So let's do a bit of a thought exercise. Let's take two starting pitchers, and tell me which one you'd rather have. Are you ready?

Have you decided yet? No, that's not a typo. Based on what I've told you so far, those two pitchers are completely identical in their stats. But let me give you some more information. Let's say Pitcher A hypothetically throws exactly 6 innings every start, and gives up exactly 3 runs. And let's say Pitcher B gives up 6 runs in 3 innings half of his starts, and 0 runs in 9 innings in half of his starts. So both pitchers have the exact same statistics, but they get to those stats rather differently. Now, which would you rather have, Pitcher A or Pitcher B?

I don't know about you, but I would personally say that I would take Pitcher A. I'd take the consistency. And you know what? I'd probably be wrong.

Matt Hunter just published an awesome piece at Fangraphs discussing the counterintuitive idea that pitcher consistency might slightly hurt your team, and I highly recommend reading his original piece, but I'll try to summarize as best I can. His method was simple: looked at the odds of a team winning given the number of innings and number of runs the starter gives up. He then added up that win percentage based on those starts, and measured the results to see whether consistency helped a pitcher.

The runs/inning chart is below. On the y-axis is the win-percentage of the team based on the runs allowed/innings pitched on the x-axis: 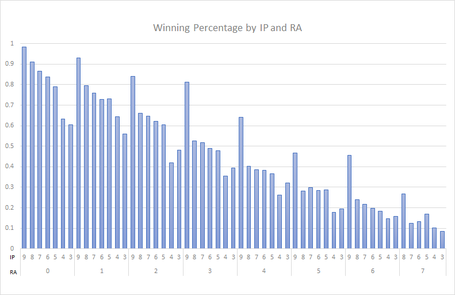 Of course, in real life pitchers aren't as wildly consistent/inconsistent as Pitchers A and B. Still, Matt Hunter did find a small disadvantage for consistent pitchers over the course of seasons.

So who are the A's most consistent and inconsistent pitchers?

My methodology was simple: I went on the game logs on Fangraphs and found the ERA's of the A's starting rotation by start. I plugged them into an excel sheet and calculated the standard deviation- this measures the average variation between the datapoints. So a high standard deviation indicates inconsistency, while a low SD indicates consistency. I realize that this methodology is very crude and simplistic, but I'm in the middle of med school exams so I apologize.

Here are the A's starters ranked by SD of ERA, most consistent to least consistent (I excluded Sonny Gray due to lack of sample size):

Note: this doesn't tell you anything about whether the pitcher was consistently good or consistently bad; it's just a measure of consistency itself. I also calculated the results by FIP, which removes defense from the equation.

In other words, I'm actually not sure what to make of the results, but I will say with some degree of certainty that Jarrod Parker is pretty inconsistent.

One last measure: I calculated the average WPA per start of each pitcher. WPA is the Win Probability Added- in other words, how much did the pitcher contribute to the team's chances of winning, like the chart above? Let's see.

In other words, the ERA inconsistency of Colon and Parker may be helping them. Or it may not. I'm not sure. I'm tired. The point is, it's something to think about.