Does Striking Out Actually Matter?

We often hear in scouting reports that a batter is "striking out too much". Are high strikeout rates necessarily bad for a hitter?

Share All sharing options for: Does Striking Out Actually Matter?

Nobody wants to strike out. I would know: on my high school baseball team, I struck out in every single at-bat I had (but not every plate appearance! I got hit by a pitch once!). At its most basic level, hitting is about the bat making contact with the ball, so in that sense a strikeout is the highest level of failure imaginable. In a more strategic sense, a strikeout is an "unproductive out"- it doesn't advance runners. Since as long as the game's been around, strikeouts have been synonymous with futility. Can you imagine if the song went "For it's 1, 2, pop-up to the shortstop at the old ball game!"?

Last season, the Oakland A's set the American League record for strikeouts. Headlines reading "A's set record they shouldn't be proud of" popped up all over the baseball world, but we laughed it off. The A's were in playoff contention, and besides, the offense actually was scoring runs at an above average rate. On the season, despite striking out more than any other American League team in the history of baseball, they were #5 in runs in the American league.

Of course, last season's A's were a completely different team in the first half versus the second half. Perhaps they had banked all those strikeouts during their abysmal first half, before the bats came alive? Let's take a look at the numbers:

By all measures, the A's were a better offense by leaps and bounds in the 2nd half last year. To review, wRC+ and OPS+ are weighted so that 100 is league average- 110 is 10% better than league average, 85 is about 15% worse than league average. The A's were a completely different (and much better) offense in the second half versus the first half, but one thing didn't change: the A's still struck out, and struck out a lot. In fact, even though their offense improved by epic proportions in the second half, they struck out at an even greater rate. Their best hitter, Brandon Moss, had a wRC+ of 160, and also had a 30% strikeout rate. Almost 1 out of every three times he came to the plate he struck out, but still managed to be by far the best hitter on the team.

Indeed, if you look at the leaderboards of the biggest strikeout-ers in the league (ranked by K%), you won't really see much of a pattern:

On that list, you see some of the worst hitters in the league, as you'd expect: Jayson Nix and BJ Upton. But we also see a lot of really productive hitters: just take a look at #17. Chris Davis is leading the league in home runs, and is batting over .330. He also strikes out in more than 1 out of every 4 at-bats. Go figure.

On the other end of the spectrum, we've got the players who strike out the least. If we assume that strikeouts are a bad thing for hitters, then we should see some of the best hitters in the league on our list:

We do see some of the better hitters in the league here: Buster Posey, Yadier Molina, Coco Crisp. We also see some pretty terrible hitters.

Some people argue that the game has changed. Strikeout rates are higher now than at any point in baseball history. It's possible that striking out doesn't look bad now, but perhaps that's a new phenomenon. So I decided to look at every hitter in every season from 1916 to 2013, and see if a high strikeout rate was correlated with a poor offensive performance or vice versa, and the answer was downright shocking.

Here's a chart of K% as compared to OPS: 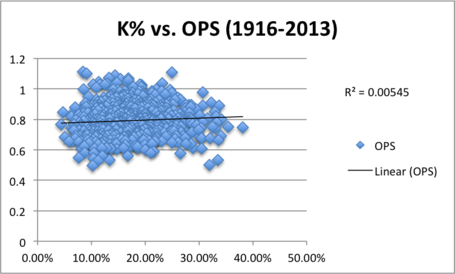 As you can see, there's no pattern whatsoever there. There seem to be an equal number of points above the line as below it. An R^2 value in a correlation is between 0 and 1, where 1 is a perfect correlation and 0 is completely random. Our R^2 is basically as close to random as you can get, meaning that K% has basically no effect on OPS. None.

I found similar results for K% vs. wRC+: 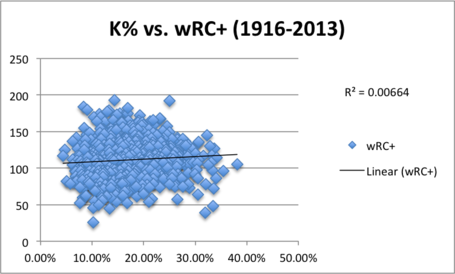 Basically, it seems as though strikeouts have basically no effect on a hitter's ability to be productive.

Yes, these findings are pretty striking. Quite honestly, I didn't expect these results when I went looking for them. We all knew that players can be productive with high strikeout rates (see: Dunn, Adam), but I figured that I'd find that strikeouts aren't as much of a problem as we'd always thought. Instead, I found that it has basically no effect on a player's offensive production whatsoever.

A few caveats: one, obviously you'd rather get a hit than a strikeout, but in most circumstances a strikeout is no worse than any other kind of out. This doesn't mean that in individual situations you'd rather have a contact hitter up than a hitter prone to strikeouts. Obviously with a runner on third and one out, a strikeout is worse than a groundout or a flyout. For instance, it seemed like Jack Cust was always coming up with runners on third and was unable to get them in, which was a big part of much of this site's frustration with him.

Stats like OPS, wOBA, and wRC are beautiful because they remove context from the equation. But part of the perceived problem with strikeouts is that in context, they don't advance runners as well as flyouts or groundouts. Is this true?

Luckily, there's a stat that deals with context. It's called WPA, or win probability added. It basically calculates how much a given play, at-bat, or player contributed to the overall likelihood of winning any given game. A single with the bases loaded in the ninth of a tie game is worth more WPA than a single with the bases empty up 7 runs. Those singles are worth the same in OPS, wOBA, and wRC.

So what about K% vs. WPA? This is a bit harder, as WPA is a counting stat. So players that play more are more likely to have a higher WPA. Also, clutch situations are more likely to produce a higher WPA, so it doesn't really answer our question as well as we would like. But there's another, lesser known stat available called RE24.

RE24 is similar to WPA in that it takes context into account, but it only takes into account the situation on the bases, not the score of the game (the 24 is for the 24 different possibilities of runners on base and number of outs). It measures how much a given play adds to (or subtracts from) the probability of your team scoring a run in that inning. So in that case, a groundout with a runner on third would positively affect your chances; a strikeout would negatively effect it. I highly recommend reading about RE24 HERE and HERE.

So theoretically, if high-strikeout hitters are prone to not driving in runs in clutch situations, we should see that that higher their K%, the lower their RE24. 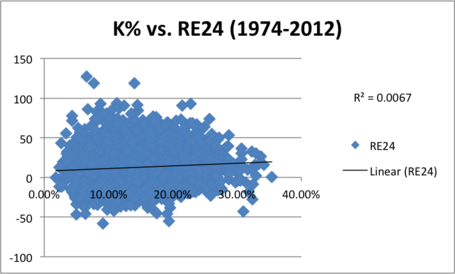 Nope. Still nothing. Being a high strikeout hitter has nothing to do with your expected ability to produce runs, even context-dependent. Still, personally, when I have a runner on third, one out, and a tie game, I'd rather have Coco Crisp (K% of 10.1%) up than Brandon Moss (K% of 30.2%).

Another caveat: just because strikeouts aren't so bad for hitters doesn't mean that they're not a good thing for pitchers. We'll get into the effects of strikeout rate for pitchers in a future article.

In the baseball world, we still haven't warmed to the fact that strikeouts don't really matter all that much for hitters. I still constantly see in articles about prospects, like Addison Russell, that "his strikeouts are concerning" or "he really needs to cut back on his strikeouts if he wants to be successful". I think part of this is still visceral. A strikeout is the greatest failure possible: the inability for bat to meet ball. But I think it's time for us to admit that strikeout rates just aren't a good measure of success or failure for hitters.