The A's have the lowest ERA in the American League, but by advanced metrics the pitching staff has been well below average. What gives?

Share All sharing options for: Smoke, Mirrors, Magic and the A's Pitching Staff

As some of you may have figured out at this point, I have a bit of a love affair with advanced baseball stats. I've always had some minor fanboy tendencies- I read literally thousands of pages of Star Wars Expanded Universe in elementary school, finished every Harry Potter book about 7 hours after it was released, and may or may not be able to still name all 151 original Pokemon. But I'm also the first to admit that in some instances, even the most newfangled, regressed, weighted, park-adjusted SABR-certified statistics just don't do a great job of telling the whole story. This, my friends, is the tale of the 2013 Oakland A's pitching staff.

As some of you may have heard, our very own Oakland Athletics have the best ERA in the American League! Sweet! Awesome! Weeee are the ERA chaaaampions, my frieeeends!! Since basically as long as baseball statistics have existed, ERA has been the preferred way to measure a pitcher's (or a pitching staff's) success. It makes sense: the runs allowed that weren't caused by errors are the pitcher's fault, and we scale that per 9 innings pitched and we get a simple stat that gives us a basic idea of how good pitchers are doing. So if the A's have the best ERA in the AL, it follows that they're the best pitching staff in the league, right?

Well, if you read the opening paragraph or if you can understand basic sarcastic tone (which, to be fair, can be really difficult on the interblags) you know that the answer to that question isn't yes. It doesn't mean that they're NOT the best, it just means that it merits a bit of a closer look, and based on the opening paragraph, that closer look just might involve advanced statistics.

And whaddaya know, here they are! I've spoken about FIP and xFIP in past articles, but I know that most people aren't super familiar with them so let's define what they are. FIP is NOT Feline Infectious Peritonitis, Freakin' Illinois People or Face in Palm, but a baseball stat called Fielding-Independent Pitching. It was invented by Tom Tango (an occasional AN reader and one of today's most prominent sabermetricians), and essentially the point is to remove defense from pitching statistics. The theory is that every team has different defenders, and good defense can turn a double to the gap into an out, while a bad defense can turn a routine double play ball into runners on 2nd and 3rd (see: Green, Grant). Either way, these are things that the pitcher has little control over. The theory behind FIP (and other defense-independent stats) is that the only things that the pitcher has control over are walks, strikeouts, and home runs, because these are completely unaffected by the defense.

xFIP takes this theory even further. Basically, pitchers as a whole have about 10% of their fly balls go for home runs. Over a short period, even as long as a season, a pitcher can keep their HR/FB rate down (or up), but in general, there's a lot of evidence that a HR/FB rate above or below 10% has a huge luck component. Basically, xFIP is the same as FIP, except instead of taking the total home runs, it changes their numbers to assume that 10% of their fly balls went for home runs, which tries to eliminate luck from the equation even more. Of all the advanced statistics we've got, xFIP has the highest correlation with future ERA. Often, it's an even better predictor of future ERA than current ERA.

You can see where this is going. Let's take a look at where the A's stand up in the AL in FIP and xFIP.

Here are the FIP leaderboards:

In FIP, the A's are #5 in the AL. Not terrible. Not amazing either. How about xFIP?

Yikes. By xFIP, the best predictor of future ERA, the A's are #12 in the American League. Out of 15 teams. Not so good.

As I mentioned, I'm a bit of a sucker for advanced stats. If this was literally any other team in the majors, I would look at that xFIP, and say to myself, "WOW, that pitching staff is sure due for a lot of regression!". But this is the A's we're talking about... I care a lot about that team (and since you're reading this on Athletics Nation, there's a solid chance that you do too), so I decided to take a closer look at why the A's might be outperforming their xFIP, and I found a couple of things that explain why xFIP might not be the best tool for understanding how the A's have had so much success at preventing runs (shout out to "Fangraphs Detectives" Ben Folds' Nuts and humanoid7 for finding a lot of this stuff on their own in the comments section of my article last week!).

How the A's are beating their xFIP:

The A's have the highest fly ball percentage in the major leagues, and by a lot. A full 42.3% of A's opponents batted balls are flies. The league average is about 35%, and the next closest team after the A's has a 38% fly ball percentage.

On the flip side, the A's line drive percentage is the lowest in the major leagues, by almost a whole percentage point. The league average is around 20%; the A's have an LD% of 18.5. The A's also have the lowest ground ball percentage in the league, more than 2% less than the next-lowest team.

There are a few reasons why these batted ball profiles are perfect for this team.

1. The A's Defense is Perfectly Suited for These Batted Ball Types

First off, the fact that the A's give up the fewest line drives in the majors is great in and of itself: line drives go for hits about 70% of the time, as opposed to about 30-40% for ground balls and even less for fly balls. So even without thinking about defense, the A's are in good shape because they're not allowing these hard-hit balls.

But the A's defense is also built for these exact batted ball profiles. First of all, the A's have perhaps the best defensive outfield in the major leagues. Yoenis Cespedes, Coco Crisp, and Chris Young have all legitimately played center field at some point in their careers, and Josh Reddick is perhaps the best defensive right fielder in the game (and has a gold glove to prove it). The A's give up a lot of fly balls, but also have the defensive prowess to track down the flies that stay in the park.

On the flip side, the A's have a pretty poor defensive middle infield. Luckily, because they're giving up the fewest ground balls of any team in the major leagues, the defense doesn't get exploited as much as it might.

A staff heavy on ground ball pitchers would be a disaster for this defense. Instead, the A's have assembled a pitching staff that plays to their defense's strengths.

2. The Coliseum is Perfectly Suited for These Batted Ball Types

There's a problem with giving up a lot of fly balls. Typically, on average, 10% of fly balls will leave the yard for home runs. Home runs are the worst kind of hit to give up for obvious reasons: they're automatic runs. So typically giving up a huge percentage of fly balls isn't a good move even with the best outfield defense on earth, because a significant percentage of THOSE BABIES ARE GONE!

However, the A's also happen to have the lowest HR/FB rate in the league, 8.5%. This means that they aren't getting burned as much by those fly balls as the rest of the league. The reason for this is the dampening effects of the Oakland Coliseum: it just isn't a good place to hit home runs. Their HR/FB rate is home is even lower at 7.5%. This strategy of using fly ball pitchers wouldn't work for most other stadiums because of the sheer number of home runs, but because the A's play half of their games at the Coliseum, they can get away with giving up more fly balls because they know they'll get burned at a much lower rate. 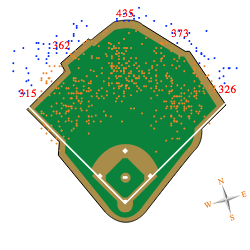 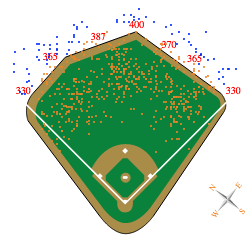 The Ballpark in Arlington 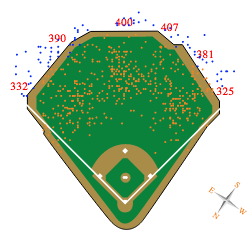 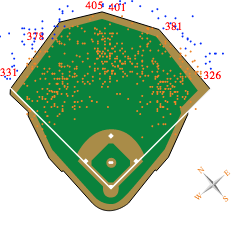 As you can see by the large amount of yellow dots on the far side of the fence, if the A's played half their games in most other parks, they'd be giving up a lot more home runs. The fly-ball pitcher strategy that the A's are currently employing works specifically in the Coliseum.

The A's are outperforming their xFIP, but I think their outperformance is sustainable. The truth of the matter is that xFIP just isn't a very good tool for understanding the A's run prevention. xFIP, by definition, tries to eliminate defense and park effects from the equation to understand the talent of the pitcher. But for the A's, the two are inextricably linked. The A's built their pitching staff specifically to take advantage of their defensive talents and their ballpark, and it seems to be working very well for them so far this season.

This isn't a problem with the stats, however. Stats give us many advantages, but stats are only as good as the people who read them, and they only work in certain contexts. I'm still in love with advanced statistics. But to understand the 2013 Oakland A's, you need a lot more than walks, strikeouts, and home runs.