Hold the Phones... Strikeouts DO Matter!

Share All sharing options for: Hold the Phones... Strikeouts DO Matter!

Last week we discussed a strange phenomenon in baseball: that strikeouts aren't necessarily bad for a hitter. There are bad hitters with low strikeout rates, good hitters with high strikeout rates, and everything in between, but strikeout rates do basically nothing to predict a major league hitter's success. One of the caveats that I gave at the time was that just because strikeouts aren't necessarily bad for hitters doesn't mean that they're not still good for pitchers. I apologize for all the negatives in that sentence, but I'm pretty sure it says what I meant it to say. Regardless, it's time for us to tackle that issue. The question for today: We know now that striking out a lot doesn't make you a bad hitter, but does striking out a lot of hitters make you a good pitcher?

Last week, we looked at the leaderboards of the highest K% and lowest K% hitters in the league and tried to deduce a pattern. Let's do the same for pitchers, shall we?

A few things jump right off the page. First of all, screw the Tigers. That rotation is terrifying. But secondly, this is a group made up exclusively of damn good pitchers. ERA- is the comparison of ERA to league average, where 100 is average and lower is better, so an ERA- of 90 is 10% better than league average. And by the way, every pitcher on that list has an ERA- of 90 or better. Last week, when we looked at the high strikeout hitters, we saw some really good hitters and some really bad hitters. WIth pitchers, though, all the high strikeout pitchers are really good.

How about the lowest strikeout pitchers?

This list is a bit more mixed- we see a few pretty good pitchers (Bartolo included, and we're going to get to those exceptions in a moment), but mostly we see slightly below average to very below average pitchers.

Sweet, point proven! Just kidding. I'm a huge skeptic. I always have been. Honestly, a nice little sample of 30 pitchers in one half season just doesn't do it for me. So why don't we expand just a little bit? If you read last week's article, you know where this is going...

I ran the numbers from every pitcher's season from 1916 to the present. I attempted to see whether there was a correlation between strikeouts and ERA-: 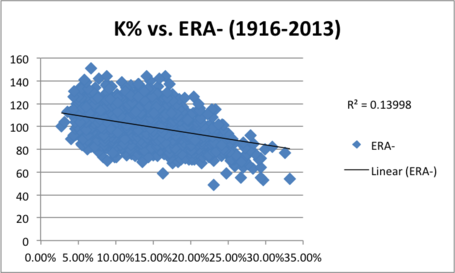 Just a quick refresher: the R^2 value tells us how much the two things are correlated. An R^2 of 0 means they have nothing to do with one another, while an R^2 of 1 means they're exactly the same (K% and strikeouts would have an R^2 of 1). An R^2 of 0.14 means that strikeouts have a somewhat significant effect on ERA. One way that statisticians like to put it is that "14% of the variance in ERA- can be explained by strikeouts". In more simple terms, this means that strikeouts are a relatively important factor in determining ERA. Unlike K% for hitters (which had an R^2 of basically 0), strikeouts seem to be relatively important for pitchers.

Of course, there are other factors that go into pitching. For instance, walks. Let's do the same analysis using walk rates. 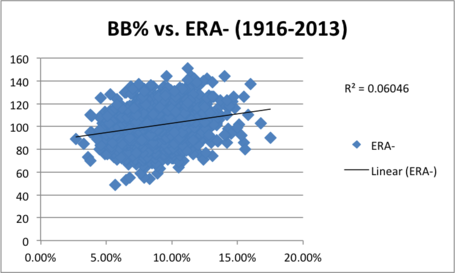 So walks also have an effect on ERA, although it's not as strong as strikeouts. This explains why Bartolo Colon and Bronson Arroyo appear on the low K% leaderboards but still have strong ERA's. You can make up for not striking out so many people by not walking anyone. Walking a lot of people will hurt you, even if you strike a ton of people out. In fact, just subtracting BB% from K% gives you an even stronger correlation: 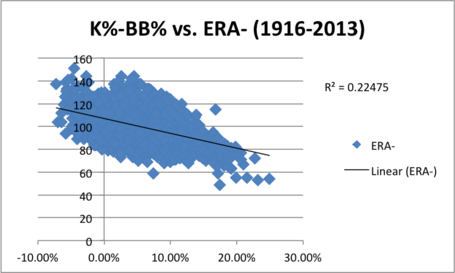 So what have we learned so far? Unlike for hitters, strikeouts are actually very important for pitchers. A strong strikeout rate is nearly always going to lead to a strong pitcher, as long as he doesn't walk more people than Rick Ankiel wearing a sleep mask.

This doesn't seem to make any sense, though. Pitchers and hitters have been locked in epic battle since the beginning of time, and so by definition when a pitcher succeeds, the hitter fails. If pitching is a zero-sum game, then if strikeouts are so important to a pitcher's success, why aren't strikeouts detrimental to hitters?

The reason for this is that there are many different ways for a hitter to succeed- a hitter can hit a lot of singles and rarely strike out, they can hit a lot of homers and strike out all the time, or they can land somewhere in between. A hitter basically makes somewhat of a choice, even if the choice isn't necessarily conscious: they can sacrifice contact for power. They might not make contact as often, but when they do, they hit the ball further.

But a pitcher has to face all of those different types of hitters. He has to face the Chris Davises and the Brandon Mosses (who strike out a ton, but also hit a ton of bombs) in addition to the Coco Crisps (who don't strike out so often, but don't typically kill your mistakes). So a pitcher that strikes out a lot of batters isn't going to have the chance to get burned as often by the power hitters of the world, because they give those hitters a lower chance of making contact. If a batter can't make contact at all, he can't hit a home run or a single. In addition, a strikeout gives you a nearly 100% chance of getting the batter out (as opposed to a ground ball or line drive), and rarely advances runners.

This second point also means that even once runners make it on base, pitchers with high strikeout rates keep those runners from scoring more often than pitchers that have higher contact rates. This is demonstrated through the correlation between K% and LOB% (left-on-base%): 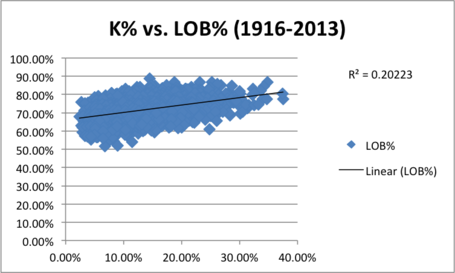 Even once batters make it on base, high strikeout pitchers have a much better chance of leaving them there than does a contact pitcher. There is a way to limit this effect, however, and it's to not walk batters so that you don't have to strand them in the first place.

The bad news: the A's are #25 in the league in strikeout rate. The good news: the A's have the lowest walk rate in the MLB. We noted above that K%-BB% is the best predictor of future ERA. Here are the league standings of K%-BB%:

So yeah, about that... not great. About the middle of the pack (and the Tigers are still unfair). And yet, as of last night the A's lead the American League in ERA! The A's may have gotten pretty lucky with the results of their pitching. They currently have a 3.63 ERA, but a 3.93 FIP and 4.28 (!!!) xFIP (these are the stats that try to remove defense from the equation so that you can look at how the pitchers are doing). I'm going to have an article next week on how the A's have managed to outperform their FIP this far (besides the obvious answer, which is elf magic), but in the meantime, just based on walks and strikeouts, it definitely looks like the A's pitching is due for some major regression.

But there's also some hope for improvement with Brett Anderson coming back soon, and the fact that Straily hasn't yet lived up to his minor league strikeout rates (his start last night was especially promising). It remains to be seen whether this pitching staff can improve on its strikeout rate, but if it can, watch out. The offense has been carrying the team so far this year, and if the pitching turns a corner, this team will be frightening.