There And Back Again: Mike Gallego

But the Gags came back, the very next day, he just couldn't stay away.

Share All sharing options for: There And Back Again: Mike Gallego

I'm going to level with you. I was born in 1985. I'm not the best person in the world to write a post about my favorite player from the 80's for the simple fact that I don't remember them, but that doesn't mean that I'm not going to give it my best shot. I took a look through Oakland's rosters for the decade, and lots of memorable names jumped out at me. Rickey Henderson, the best and most exciting player in Athletics history. Mark McGwire and Dennis Eckersley, my childhood favorites. Terry Steinbach, who I already wrote about last winter. Jay Howell, inexplicably my older brother's favorite as a kid. Lance Blankenship, whose name fascinated me as a child, and Ron Hassey, the only catcher in MLB history to catch two perfect games. Carney, Weiss, Stew, Hendu...the list goes on, and it barely even touches the first half of the decade.

As a player, Gallego clocked in somewhere between Cliff Pennington and Mark Ellis. He was never much of a hitter (though he did manage double-digit homers twice), so he earned his bread in the Majors with his fielding. He bounced between second base and shortstop for Oakland from 1985 through 1991, and could also cover third base in a pinch. Fangraphs (14.1 fWAR) and Baseball-Reference (17.1 bWAR) both agree that he was a solid player throughout his career, and that most of his value came from his glove - he even posted one or two 4-win seasons, depending on which site's version of WAR you prefer. Most importantly, however, he played a key role on three straight AL Champion teams, walking away with a World Series victory in 1989 and a pretty cool story.

There is another reason that I am writing about Gallego today, though. As a fan of the A's, I've grown accustomed to seeing player after player leave for other teams, having to learn new names and faces and pick new favorites on an almost annual basis. Gallego, though, seems destined to be an Oakland Athletic. He was drafted by the A's in the 2nd round in 1981, and debuted for the team in '85. When the late-80's dynasty was coming to a close, though, he signed with the New York Yankees. Eww, gross. But then, he returned to Oaktown in 1995 for one last hurrah before finishing his career in St. Louis with Tony LaRussa, which was the fashionable thing for former A's to do at the time. He eventually became a coach with the Colorado Rockies before returning to the A's once more as their 3rd base coach and infield instructor. He's been around the block, but he keeps coming back to Oakland. You've just gotta love that.

My personal story about Gallego involves a baseball. Like any kid who grew up as a big sports fan, I liked to get autographs from the players. That mostly involved bringing a ball and a pen to batting practice before the games, but every so often my brother and I would take advantage of autograph sessions at local baseball card shops. One day during the offseason in 1991, we went to such a signing at Talkin' Baseball in Danville, which was our favorite local shop (and it's still there today!). Gallego was there with LaRussa, but it was already public knowledge that Gags wouldn't be re-signing with the team for the 1992 season. We got his autograph on a ball, and my mother remembers telling him something along the lines of, "Can't you stay with the A's? We really don't want you to go!", to which he offered a smile.

Fast forward to Gallego's second stint in Oakland in 1995. I dug up the old ball and brought it with me to a game, knowing exactly what I wanted to do with it. I camped out by the dugout during the pre-game warm-ups, and when Gallego came within earshot, I asked him for an autograph. I handed him the ball, and he took one look at it. "I already signed this," he said. "I know, but that was from last time you were on the team. Can you sign it again please?" He happily obliged, adding a little "1995" to the back of his name to differentiate the two signatures.

I've got a lot of old Athletics signatures. In fact, Mark McGwire signed that very same ball, but he must have used a sub-par pen because that autograph has faded almost to the point of disappearing. The Gallego autographs are still my favorites though, just for the pure quirkiness of having the same guy sign the ball in two different stints with the team. I guess that's the appeal of Gallego; not the best player there ever was, but with enough charm and personality to make himself one of the more memorable ones. He was one of the coaches that Nico, Cup and I got to interview at FanFest this year, and he is an absolute crack-up and one of the friendliest guys you could hope to find in professional sports. I wanted so badly to bring the ball again and have him sign it for a third time, but there was a strict no-autograph rule at the interview session.

I guess I'll just have to show up early to a game once more, and camp out by the dugout like I used to do as a kid. I wonder what Gags will say this time when I hand him that ball. 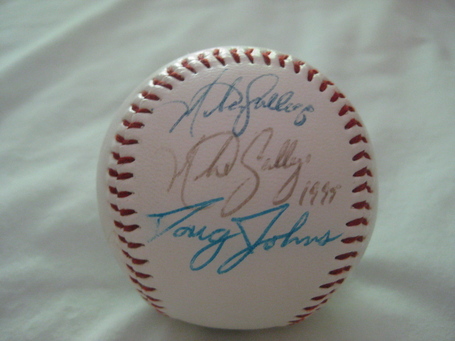 Pictured: The Double-Gallego ball. Below his twin sigs is Doug Johns, who was a terrible pitcher but at least had beautiful penmanship. Really wish that he hadn't signed in that exact spot!

Topps Archives Baseball is a celebration of the 70s, 80s and 90s, what many consider to be the glory years of card collecting. If you collected Topps Baseball Cards during these years then you will love Topps Archives Baseball. Look for autographs and memorabilia cards from today’s stars and your favorite retired players on classic Topps card designs.