The A's take their first ever trip to Miller Park.

Share All sharing options for: GameThread #59: A's at Brewers

Hello Athletics Nation, welcome to another edition of A's baseball, interleague style! What? You're not excited?

Jerry Blevins is; Brett Anderson, not so much:

It's the A's first-ever trip to Miller Park, a.k.a. The Forever Cursed House that Bud Selig Built. A long time ago, when the Milwaukee Brewers played in County Stadium, which I think was a wonderfully adequate baseball-only park, the Brew Crew occupied the basement in the AL. Thanks to Selig who had some sort of yearning for the Milwaukee Braves of yesteryear (he has to be the only one) they now occupy the basement in the NL, dead last in the Central at 21-34.

They switched leagues in 1998. The opportunity was seen as a potential boost to revenue, and Selig didn't want to look biased. He apparently "offered" it to the Royals first (who I am assuming were told in no uncertain terms to refuse to move to a division with the big-draw geographic rival Cardinals and the huge Cubs fan contingent).

They are a team with a history of futility. They started as the one-and-done Seattle Pilots back in 1969, the year after the A's moved to Oakland. With the Pilots' bankruptcy a certain car salesman bought the team and moved them to Milwaukee. The Brewers have made the playoffs four times in 44 years, reaching the World Series just once. They have an all-time .477 winning percentage. The Oakland A's have a .607 winning percentage across pretty much the same time period. Bud Selig, is there anything that you cannot ruin?

In an extreme case of narcissm, after Selig's family sold the team to a new owner, he forced the buyer to erect a statute of him outside of Miller Park. Don't tell me that wasn't part of the deal with the sale. Here is that statue which we can all hope is a favorite target of the area's drunk pigeons: 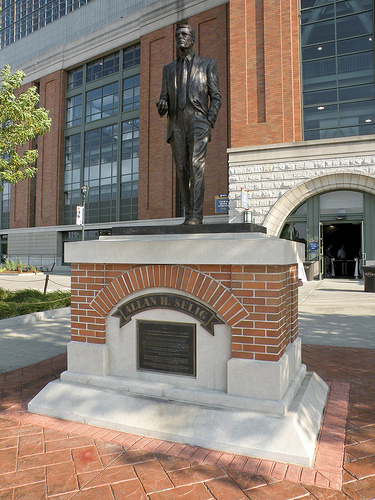 Selig aside this team has a couple of redeeming qualities:

The concept of a team mascot first emerged back in 1970 when the expansion team needed to draw more fans to the park. That year, the first "Bernie Brewer", 69 year old Milt Mason, camped out in a trailer atop the scoreboard in late June, vowing not to come down until a crowd of at least 40,000 attended a game. 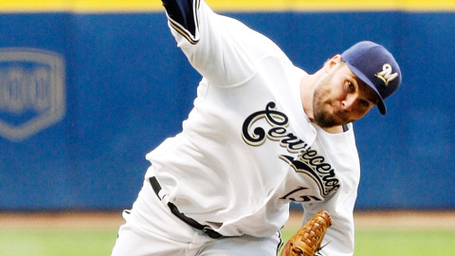 Beyond that, I got nothing. I want to crush these Spawn of Selig into oblivion and Josh Donaldson to tag "Bringer of Rain" on that heinous statue on the way out after a 3-game sweep. Here are your pitchers/lineups tonight:Monday, June 3,

Milone started strong against the Giants last time out but unraveled in the sixth frame, when he allowed three of his four runs without recording an out. He's struggled, however, in even-numbered starts with a 1-3 record and 6.46 ERA. WOW, USEFUL STAT MLB.COM!

Estrada has worked seven innings in three of his last four starts since taking two extra days to recover from an eight-run outing against the Cardinals on May 5. He has been trying to emulate Kyle Lohse's crisp pace.

MLB.com hitting hard with the stats. Even numbered starts! Anyway, this Marco Estrada fella is about to run into an A's team 9-1 in their last 10, winners of 14 out of their last 16 and rolling in on a three game win streak.

This recent stretch has seen the A's attendance climb to 25th (take that Seattle!) and about 3,000 more per game than this time last year. Here's hoping the A's keep the wins going on the road and come back home to even larger throngs of adoring fans.