Dan Moore, the manager over at VEB, was nice enough to take some time out of his busy schedule to answer some of my burning questions about the Cardinals. Here is what we talked about. Unfortunately, no word on whether Matt Holiday is smiling with more regularity.

The A's and the Cardinals have two of the most prolific walk-avoiding pitchers in the majors in Bartolo Colon and Adam Wainwright. It's pretty clear how Colon manages to keep his walks down: throwing about 85% fastballs. But Wainwright uses a wider repertoire of pitches. How has he managed to keep his walks down this year? Did he change something this year or post-Tommy John Surgery?

It hasn't been a change in approach so much as a refinement of the approach he's maintained for years; like seemingly every pitcher the Cardinals have held onto in the last 15 years, he's developed an impressive cutter that he's become more reliant on every year. (It's not quite as abrupt as it looks on FanGraphs, though-whether Wainwright was throwing a slow cutter or a fast slider has been a matter of some fanbase debate since well before PitchF/X weighed in on it.)

With a Holiday-Jay-Beltran outfield arrangement, that's pretty set. Top prospect Oscar Tavares is also an outfielder, and could take over for Beltran once he eventually gets old. On the other hand, isn't Allen Craig a capable OF too? Is there any thought that Tavares would be traded to shore up other areas of the team? (Not that they need it. The Cardinals are a pretty complete team as it stands.)

The outfield's actually even more crowded than that; Matt Adams, the Cardinals' other MLB-ready hitting prospect, would be starting at first base right (with Craig in the outfield) were it not for Beltran, and even Beltran's exit at the end of the season would leave him on the bench, if current trends hold.

For all that, though, I'd be pretty stunned if the Cardinals traded Taveras. Two of the Cardinals' most pervasive organizational trends are a reluctance to trade price-controlled talent and a willingness to hold onto hitting prospects until they become "late-bloomers" by default; that's good news for Cardinals fans, and bad news, probably, for Matt Adams, who is more tradeable and who could probably be starting somewhere else.

How is Mike Matheny as a manager? I feel like he made some headlines for comments earlier in his tenure but haven't heard much about him since. Is he a relatively stats-friendly guy, or mostly an old school guy?

To be honest, I'm having a really hard time judging anybody as a manager after 16 years of Tony La Russa. The La Russa experience is just so constant-so pervasive-that anybody else looks completely hands-off by comparison. That's especially true of Mike Matheny, who might actually be hands-off.

He bunts too much, like every other manager in the history of baseball, but he's been fine so far; most noticeably, this year, he's been flexible enough to put Matt Carpenter-a slow, high-OBP type-into the leadoff spot when Jon Jay scuffled. Managers are difficult (if not impossible) to evaluate, but in his year-and-a-half in the role the Cardinals have played well in spite of some surprising injuries and changes in personnel. Nothing to complain about yet.

Looks like Wainwright, Miller, and Lynn have been a more than solid 1-2-3 front end. The back end, however, seems to be a mishmash, with no one else having made more than 9 starts. What happened?

The simplest explanation: Everybody got hurt. Jaime Garcia's shoulder held up just long enough for all of us to begin entertaining the vain hope that he might have escaped surgery; Jake Westbrook managed to hurt something despite having the lowest-impact delivery I've seen from anybody not named Wakefield; John Gast came in, demonstrated he was only a little over his head, and then got hurt himself; Michael Wacha, last year's first-rounder, was sent back down once the Cardinals put their faith in Tyler Lyons; they lost their faith in Tyler Lyons; and now Joe Kelly, who after a pretty good season as last year's surprise injury replacement slipped into the back of the bullpen, is the fifth starter, only the Cardinals plan to skip him as often as possible.

I might not have the order right, there, but you get the idea.

If the Cardinals meet the Giants in the playoffs, can they please make sure to knock them off this time? Thanks in advance.

I'll see what I can do, but I can't promise anything except that we'll continue to harbor a vague, angry suspicion that everybody in San Francisco is calling us "flyover country" when our backs are turned.

Ted Drewes is delicious, and so is toasted ravioli, but since I'm not actually from St. Louis I'm able to admit that the whole Imo's Pizza thing is just a weird mass hallucination. Where I'm from—Springfield, Illinois, about an hour-and-a-half away—we have our own wonderful, disgusting delicacy, so I can't really judge them for it.
Note: this is what Dan is talking about: a Horseshoe Sandwich: 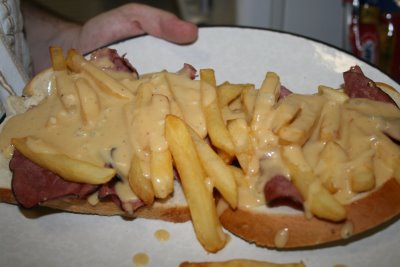 Jury's out on that one, man.
The A's and Cards begin battle this weekend for former Tony LaRussa team supremacy. Nico will have your gamethread tonight for the 7:05 PM start