It's Time to Trust Jesse Chavez

Share All sharing options for: It's Time to Trust Jesse Chavez

When the A's purchased Jesse Chavez's contract from the Toronto Blue Jays last year, the collective reaction amongst A's fans was "Really? Him?" The volume on the grumbling got turned up when we kept Chavez and got rid of key 2012 performer Travis Blackley, and for good reason. Here's a list of Jesse Chavez's major league seasons by ERA coming into this year:

Those numbers are more terrifying than three Jack Custs playing outfield. It seemed to us that there was no reason for Jesse Chavez to be pitching for any major league team, much less one who had a division to win. In case anyone forgot, we did win it, despite the fact that Jesse Chavez pitched in games 143, 146, 147, and 156, giving up runs in 3 out of the 4 appearances, all A's losses.

The legend of Jesse Chavez had grown (shrunk?) to the point that this season, whenever Bob Melvin would even have Chavez warm up, we would immediately assume that BoMel was punting the game. When Chavez came into the game in the 13th inning against the Yankees, we all knew it was only a matter of time until the Yankees exploded for 4 runs and we would all go home unhappy.

Of course, we all know now what happened next. He promptly went 5.2 innings, giving up only 1 hit, 2 walks, and striking out 7. We were all surprised, but the gutsy performance lowered Chavez's season ERA to 1.83. While he did take the loss in his next outing against the Rangers, it seems, so far, that Jesse "Forfeit the Game" Chavez is a thing of the past. What changed, besides the fact that the A's front office team is a much better evaluator of talent than we are?

There are a few different aspects of his seemingly miraculous turnaround, but one of the main aspects is this: he wasn't nearly as bad as his numbers looked.

If you really want to vomit, go back and look at the Jesse Chavez ERA chart above, but I don't recommend it. The numbers seem to speak for themselves: he consistently, over multiple seasons, posted an awful ERA. But there are a few problems with those numbers.

That still doesn't help his awful numbers in 2010 and 2012, though. One cool statistic provided by FanGraphs is LOB% (left on base%). Research has shown that pitchers have almost no control over stranding runners- over time, most pitchers will have a LOB% around 70%. The idea of "bearing down" with runners on base has not been shown statistically. In the short term, though, a pitcher might strand a larger or smaller number of runners, inflating or deflating their ERA before regression takes hold. For relief pitchers, who pitch a much smaller number of innings than starters, LOB% fluctuations have a much greater effect.

It seems that his awful numbers weren't nearly as bad as they might seem at first glace. I think there is no way of demonstrating this better than the following: Jesse Chavez's career ERA is now 5.57. His career xFIP, the best predictor of future ERA, is 4.27. Not great, but worlds better than what his ERA numbers might suggest

Relief pitchers who have poor outings often don't get another chance, and so there's no time for their numbers to regress to the mean. Jesse Chavez is getting his chance now.

Does this mean that we should expect Jesse Chavez to have a sub-3.00 ERA going forward? Of course not. It seems like he's getting lucky in the other direction right now: his BABIP is a completely unsustainable .236, and his LOB% 79.8%, which is a certified "excellent" by FanGraphs.

But there are also reasons to believe that Jesse Chavez can continue to have success.

Two of the best indicators of pitcher success are strikeouts and walks. Here is a comparison of Jesse Chavez to league average in terms of K/9 (mouse over for details!):

He's consistently been above league average since 2011, and his minor league numbers have been consistently high as well. In fact, for the last three seasons in both the majors and minors, Chavez has yet to post a K% under 20. FanGraphs has another chart for comparing K%:

Jesse Chavez, in both the majors and minors, for the past few years has consistently graded out as between "above average" and "excellent" in the strikeout department.
In addition, for the past three years Jesse Chavez has consistently shown the ability, at least in the minor leagues, to limit his walks. Since 2011, he has yet to post a walk rate of higher than 6.4% in the minors. Here is the FanGraphs guide to walk rates:
Again, Jesse Chavez has consistently been between "above average" and "excellent" in his ability to limit walks, and this year it's finally translating at the major league level: he's got a 6.3% BB% this year, which is a very good sign.
I've been doing some research on just how predictive K% and BB% are of future performance for pitchers. I intend to write a larger future article about this, but it's relevant for now. A lot of sabermetricians like to use K/BB, but for a few reasons which have been written about HERE and HERE, I prefer to use K% - BB% as a more effective tool. I ran the numbers for all relievers between 1916 and 2013, attempting to discern how K% and B% are correlated with ERA. I used ERA-, which compares ERA to league average, to help get rid of the differences in ERAs in different eras (no pun intended).
On the x-axis is K% - BB% for each pitcher. On the y-axis is that pitcher's ERA-. ERA- is scaled to 100 as the league average. If you have an ERA- of 90, you have an ERA 10% better than your league average; If you have an ERA- of 110, you have an ERA 10% worse than league average. Here are my findings for all relievers between 1916 and 2013: 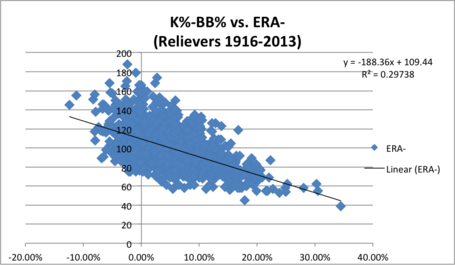 As you can see, there's a relatively strong correlation between K-BB% and ERA (for the record, the R^2 of K/BB vs. ERA- for relievers is 0.27 - so the correlation is still there but it is not as strong). The key value here is the R^2. Basically, the closer the R^2 to 1, the more close the correlation is. What an R^2 value of 0.3 tells us is that while there are many other factors that have an effect on ERA, the rate of strikeouts and walks affects the ERA relatively strongly. Another way of saying this is that 30% of the variance in ERA can be explained by the strikeout and walk rates.

The fact that Jesse Chavez has had a consistently strong strikeout rate and low walk rate for the last few years is very encouraging.

Nico also pointed out after the Yankees game that Chavez's pitch repertoire has changed over the last two years, which has helped him reduce his walk rate. This chart from Brooks Baseball shows the changes in his pitch usage over the past three years:

He has added a cutter, completely cut out his slider, and drastically reduced his usage of four-seam fastballs while increasing his curveballs and changeups. Jesse Chavez is essentially a different pitcher than he was early in his career. The good news is that he's getting more swings-and-misses from the pitches he's throwing more often. The following chart is of his whiff percentage by pitch type:

These newer pitches (the cutter, the curveball, and the changeup) are also the pitches with which he hits the strike zone most often, while the four-seam and slider, which he has slowly cut out, were much more wild:

Based on his recent results, we have every reason to believe that Jesse "OH DEAR GOD CALL THE AMBULANCE" Chavez has been replaced with Jesse "Solid Reliever" Chavez. We shouldn't expect him to maintain these kinds of numbers (the .231 BABIP and 80% LOB% is unsustainable), but going forward it's not the end of the world when Bob Melvin makes the call to Jesse Chavez in the bullpen.