Where does Bartolo Colon's season so far rank in baseball history in terms of his ability to not walk batters?

Note: I wrote this before last night's start... I have no idea how he did last night, because last night is currently the future for me. If he ended up walking 10 batters in 3 2/3 innings, don't kill me!

Since joining the Oakland A's, Bartolo Colon has been a strike thrower of epic proportions (to complement his own epic proportions). Last year, he set a major league record with 38 (!!!) consecutive strikes in a game, and this year he's walked exactly 6 batters in 77.1 innings. That's an insane number, and Bartolo's seemingly superhuman ability to limit the free pass has been talked about ad nauseum on this site. But it got me to wondering... just where does Bartolo Colon rank all-time in terms of his lack of walks?

For obvious reasons, there's no major league record for "least walks in a season". Or, I guess there is, but I'm the record holder with 0 walks, and in all likelihood so are you! Congratulations!

A better approach is to look at walk rate over the course of the season. There are two main ways to do this. The more traditional way is BB/9, the number of walks issued per 9 innings pitched. The other way is BB%, which is the percentage of plate appearances that end in a walk. Both should give a pretty accurate picture of how Bartolo is doing this year.

Over at FanGraphs I checked the leaderboards for both statistics since 1916. I used 1916 because that's the first year that BB% statistics are available. Here we go:

Single Season BB/9 Leaders from 1916 to Present (via FanGraphs)

Wow. Before we nitpick, let's bask in that for a moment. Bartolo Colon is currently having the #5 all-time season in terms of both BB/9 and BB%. We knew what he was doing was unusual, but what Bartolo Colon has been doing so far this year has been a season for the ages.

The caveats: obviously we're only 1/3 of the way through the season, and there's lots of time for regression. This is only a 12 game sample! Even a few walks in his next start would send him free-falling down the list. The irony is that Bartolo isn't even the leader this season in BB% or BB/9; Adam Wainwright is also having a stellar season thus far. Still, to have a walk rate better than Greg Maddux's best season after a full third of the games behind you is something to be proud of.

What's awesome is that we live in the age of pitch f/x, and that's a question we can actually answer! Pitch f/x tracks the number of pitches that a pitcher throws both in and out of the zone, no matter what the umpires actually call the pitch. We can use this to rate catchers in terms of their ability to frame pitches (the subject of a future article!), but we can also use this to determine whether a pitcher is being squeezed, or whether he's getting a larger-than-normal strike zone.

and that should tell us the number of pitches that met the definition of a strike, even if the umpire didn't call it that way. Then, you compare the numbers.

Bartolo has thrown 1057 pitches this year, of which 740 have gone for strikes. He has an official strike percentage of almost exactly 70.0% strikes.

In other words, Bartolo has actually received 2.2% fewer strike calls than pitch f/x thinks he deserves. This is equivalent to 2 strikes every 100 pitches that the umpire called. Jeff Sullivan at FanGraphs developed a statistic called Diff/1000, which attempts to determine which pitchers are getting generous strike zones and which are getting squeezed. Bartolo Colon with a difference of 2.2% sits at -22, meaning that he gets about 22 fewer strike calls per 1000 pitches than he should according to pitch f/x.

It is unclear whether this is due to the poor framing skills of John Jaso and Derek Norris, or whether Bartolo has just had bad luck with the umps, but he's actually had this impressive season even while seemingly getting a stingy strike zone.

To demonstrate this somewhat, I present to you the zone plots (via Brooks Baseball) from 3 of Bartolo Colon's walks this season (which, may I remind you, is half of his total!). If the graph is a little too small for you, click on it for a bigger version. 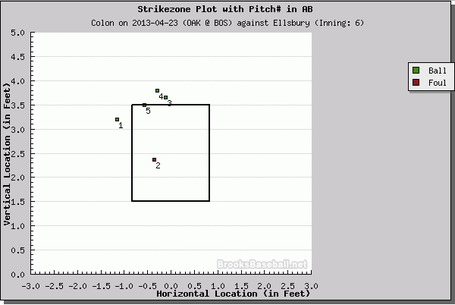 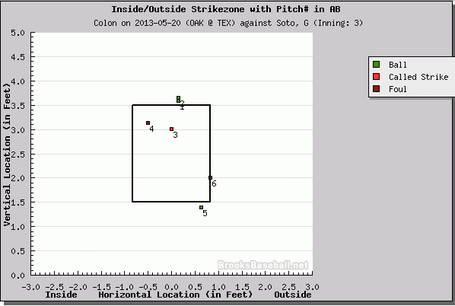 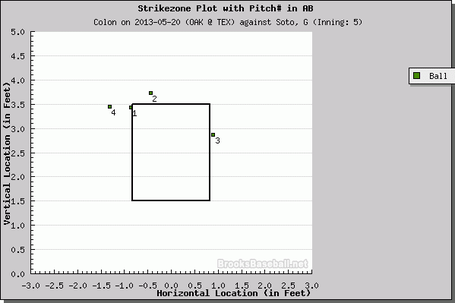 What do these zone plots teach us? First, that Giovanni Soto has a full 1/3 of the total walks against Colon this year! Also, that in these three plate appearances that ended in a walk, there was at least one pitch that could (and according to pitch f/x, perhaps should) have been called a strike. This doesn't prove definitively that Colon should only have three walks this year, umpiring is clearly part of the game, and I could likely find other instances where Bartolo got calls the other direction. But it just goes to show how on-point he's been this season.

What's especially impressive about what Bartolo has done so far is that he's not just lobbing meatballs down the middle of the plate to keep his walks down. His K% is actually about the same as it has been for the last few years. Just for fun, I present to you the all-time leaderboard of K/BB:

Some pretty sweet names on that list, although the fact that Adam Wainwright is currently #1 all-time by a mile means that the numbers likely aren't sustainable (or, alternatively, just speaks to how insane of a season he's having). Still though, it doesn't take away from what Wainwright and Bartolo Colon have done for a full third of a season: have a walk rate of historic proportions.

Edit: After last night's 4 walks in 6 innings, Bartolo raised his BB/9 to 1.08 which would now be the 40th lowest since 1916, and his BB% to 3.0%, which would rank as the 35th lowest ever. His K/BB ranks 81st. This just puts into perspective how insane Colon was doing up until last night: one start increased his walks by 67%!! It also puts into perspective just how small a sample size even a third of a season is for a starting pitcher.