A's hang on for 6-4 victory over Yankees

The A's were coasting to a shutout victory...until they weren't. But all's well that ends well.

Share All sharing options for: A's hang on for 6-4 victory over Yankees

Prior to the game, Derek Norris showed off his new mullet. What he didn't show off was his newfound hitting stroke. Sporting a batting average of .194 coming into the game, all he did was get two hits and four RBI off C.C. Sabathia to lead the A's to a victory in the series opener. 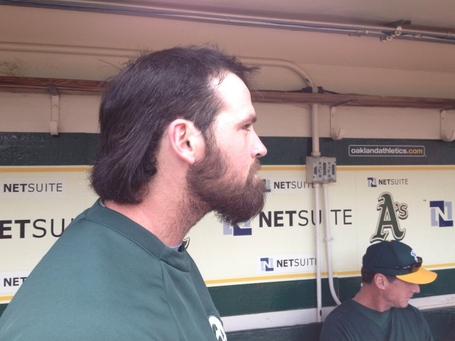 The pregame mullet was key [via blog.sfgate.com]

The game had the makings of a potential pitchers duel between Bartolo Colon and Sabathia. Colon started off with a scary 27-pitch first inning that included a very uncharacteristic two walks. However, he was able to work his way out of the jam unscathed, and for the rest of the way held up his end of the bargain. Coco Crisp ensured that Sabathia wouldn't do the same, crushing the second pitch he saw for a laser home run straight into the left field BBQ Terrace. It was his 8th home run of the year.

Nate Freiman started the A's off in the second inning with the first of three hits on the day. After Reddick reached on a force out, Norris stepped to the plate with two outs. A's fans that begged for a lucky bloop were rewarded. Norris skyed a flyball right in no man's land; perhaps an actual major league rightfielder could have gotten a better jump and caught the ball, but the Yankees had career infielder Lyle Overbay (he had literally never played in the OF until this season) manning the position. Meanwhile, the A's rightfielder got a huge jump, and with his speed and alert baserunning, Mike Gallego never hesitated in waving him home. 2-0 A's, and the mullet was working its magic.

Seth Smith came into the game for Yoenis Cespedes, who tweaked his hamstring trying to hustle down the line in the first inning and had to exit. However, the A's didn't miss a beat.

Colon continued cruising through the Yankees lineup, and it seemed like Sabathia was settling down after his 1-2-3 bottom of the third. However, the mullet struck again in the fourth inning. Freiman started the action with a one-out single. Chris Young, the subject of much consternation among the A's fanbase, lined a solid single to center. Norris came up to bat with two on, two out. He responded by cranking a hanging curveball from Sabathia over the jagged edge in left-center. 5-0 A's, and the party was on.

In the sixth inning, a Josh Donaldson double, productive out by Freiman and a wild pitch by Sabathia combined to give the A's another run, making it 6-0. So how did a 6-0 lead in the 6th inning turn into this?

that was possibly the least fun win ever

Colon was over 100 pitches, so Sean Doolittle came in for the seventh. Doolittle reverted to form. He continued throwing fastballs for strikes, but unlike his previous few outings, he got an easy 1-2-3 inning.

Jerry Blevins came in for the 8th inning, and then the "Yankees were the Yankees." A couple of groundball hits by Brett Gardner and Robinson Cano put two on, and a soft flyball off the bat of Mark Texeira plated a run. Travis Hafner stepped to the plate and got every bit of the skinny sinker. Reddick made an amazing read on the ball and somehow got to the line to steal extra bases and RBIs from Hafner.

With two on and two out, Vernon Wells pinch hit for Overbay. With a 6-1 lead, Melvin decided to stick it out with Blevins; unfortunately his faith was not rewarded. Wells lined a single to left. At that point Melvin made the change and Ryan Cook got Ichiro to quietly ground out. Crisis averted.

Cook stayed in for the 9th, and he sandwiched two outs around an innocuous Chris Stewart single. With the game almost wrapped up, Cano smashed a double. No worries though, Balfour was coming in to save the game. But first he had to allow a two run single to Texeira on a straight fastball right down Broadway. Damn Yankees being Yankees again. The crowd suddenly got loud as the multitudes of Yankees "fans" in attendance finally had something to cheer about with the score now 6-4. Travis Hafner stepped into the box representing the tying run. Like his last at-bat, he absolutely crushed a pitch (this time to left center), but Seth Smith made a game-saving catch with a small hop and his back against the wall.