Dan Straily outpitched Yu Davish today. Yoenis Cespedes hit a solo home run to dead center in the 3rd. And Sean Doolittle and Grant Balfour closed out a rare 1-0 victory deep in the heart of the Dallas metroplex.

There are some rare feats in baseball. Once or twice a year, someone throws a no-hitter. Another couple times, someone hits for the cycle. But even rarer than both of those is a 1-0 victory by the away team at Rangers Ballpark in Arlington. John Shea has the record:

It's the 13th 1-0 game in Rangers Ballpark history.

Since its opening in 1994, this has been known as a place of horrors for the A's and any other visiting team. The A's once lost a game 17-16 in 2000 that they led 15-7 at one time. Bill King famously did not travel on road trips to Texas at the end of his career. He hated the heat and the crazy "alcoholic-filled nightmare" games.

Today, with Yu Darvish starting for Texas and thunderstorms threatening above, it had nightmare all over it for the A's. He's the best pitcher in the American League, and he did have a decent start today. He threw 100 pitches over 6 innings, K'ed only 5 A's and walked 3. The A's helped him out, again leaving double-digits on the basepaths (and the bases loaded in the 8th) and 8 in scoring position, and not adding on when they could. Indeed, despite the win, the most frustrating sequence of the game came in the 5th inning. Eric Sogard led off with a walk, and Adam Rosales bunted. Not only that, but to confound the stupidity, Rosales did not do his normal all-out hustle out of the box. What resulted was Darvish alertly throwing to second to get Sogard, and Elvis Andrus making an off-balance throw to get Rosales by a step at 1B for a double play. It was a good play on both ends for Texas, but equally dumb for Rosales to assume they would throw to second and nothing else.

Before that, however, in the battle of Eastern Hemisphere vs. Western Hemisphere imports, the Western Hemisphere won. Yoenis Cespedes crushed a Darvish pitch with two outs in the top of the 3rd to give the A's the only run they would need. This was because Dan Straily had his best MLB outing today. Over 7 innings, he faced only one over the minimum, allowed 2 hits, and struck out 5. Most importantly, he allowed no walks. 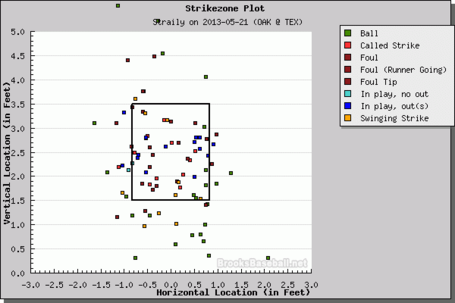 And here is it from his start, last Wednesday: 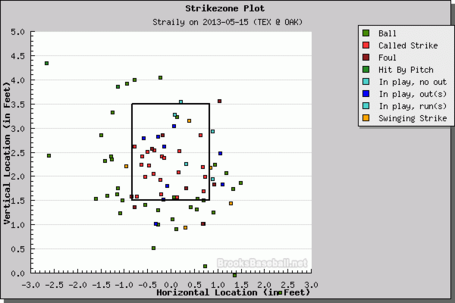 As you can see, he worked down in the zone more often and was overall in the zone more often. That is what he will be need to do consistently to be successful in a big league rotation. With any luck, he builds on this start, and Sonny Gray is allowed to stay down in AAA where he belongs to get more seasoning.

That was pretty much it. Between Straily, who finished the 7th on 6 pitches, and Sean Doolittle and Grant Balfour, the Rangers were kept quiet all night. Doolittle struck out 2 of the 3 men he faced, and Balfour got Profar to groundout, struck out Elvis Andrus, and got David Murphy to fly out to Cespedes - fittingly- to end it.

This was the A's 5th consecutive victory, and their 6th of the last 8 games they've played. Having now won two consecutive series, the A's will look to finish off a road sweep of Texas tomorrow. At 11:05 AM PST, Alex Hall will host your game thread.