Evolution of a Pitcher: Brett Anderson

When he's not dodging line drives hit up in the middle, Brett Anderson has had a really interesting and successful career to this point. Here is a breakdown of how his pitching repertoire has changed over time.

Share All sharing options for: Evolution of a Pitcher: Brett Anderson

It was actually Anderson who pre-dated Trevor Cahill, Gio Gonzalez, and Vin Mazzaro and was to be the anchor of a new "Big Four" rotation around the 2009 season. Fast-forward 4 years, and things have changed significantly: Cahill and Gonzalez, of course, became All-Stars and have fulfilled their potential in anchoring MLB rotations, just not for the A's. Indeed, they were traded for Jarrod Parker and Tom Milone, respectively, who are now themselves anchors of the A's rotation. Mazzaro, unfortunately, has never fulfilled his promise, and currently toils in AAA for the Pirates, despite some saying he had the best stuff between he, Cahill, and Gio. Nevertheless, it's always been Anderson who was regarded as the future ace.

There was no reason not to, either. He had the power velocity, the baseball pedigree -- his father is a coach at University of Oklahoma -- was left-handed, and had the control (unlike Gonzalez at that time) to be a top of the rotation pitcher for years to come. Who could forget his masterful performance at Fenway Park in his rookie year: 9 IP, 2 BB, 9 K, 2 H and a complete-game shutout against the Red Sox.

Who could forget his masterful performance at Fenway Park in his rookie year: 9 IP, 2 BB, 9 K, 2 H and a complete-game shutout against the Red Sox.

The A's certainly did not, and signed him to a 4 year extension in 2010 with two club options in 2014 and 2015. Indeed, they also rather infamously rejected a trade this off-season that would have sent Anderson to Kansas City for über-prospect Wil Myers.

With all that hype, though, Anderson has always had one drawback: inability to stay healthy. Two short DL stints in 2010 culminated in mid-2011 with the news every A's fan feared: Tommy John Surgery for a partial UCL tear. His recovery was long and arduous, but culminated this past summer, coming back as well as anyone ever has from Tommy John, posting a 2.72 FIP, 2.57 ERA, and a 3.57 K/BB ratio in 6 starts, including a gutsy comeback from an oblique strain in the ALDS against Detroit to help push the series ultimately out to 5 games. 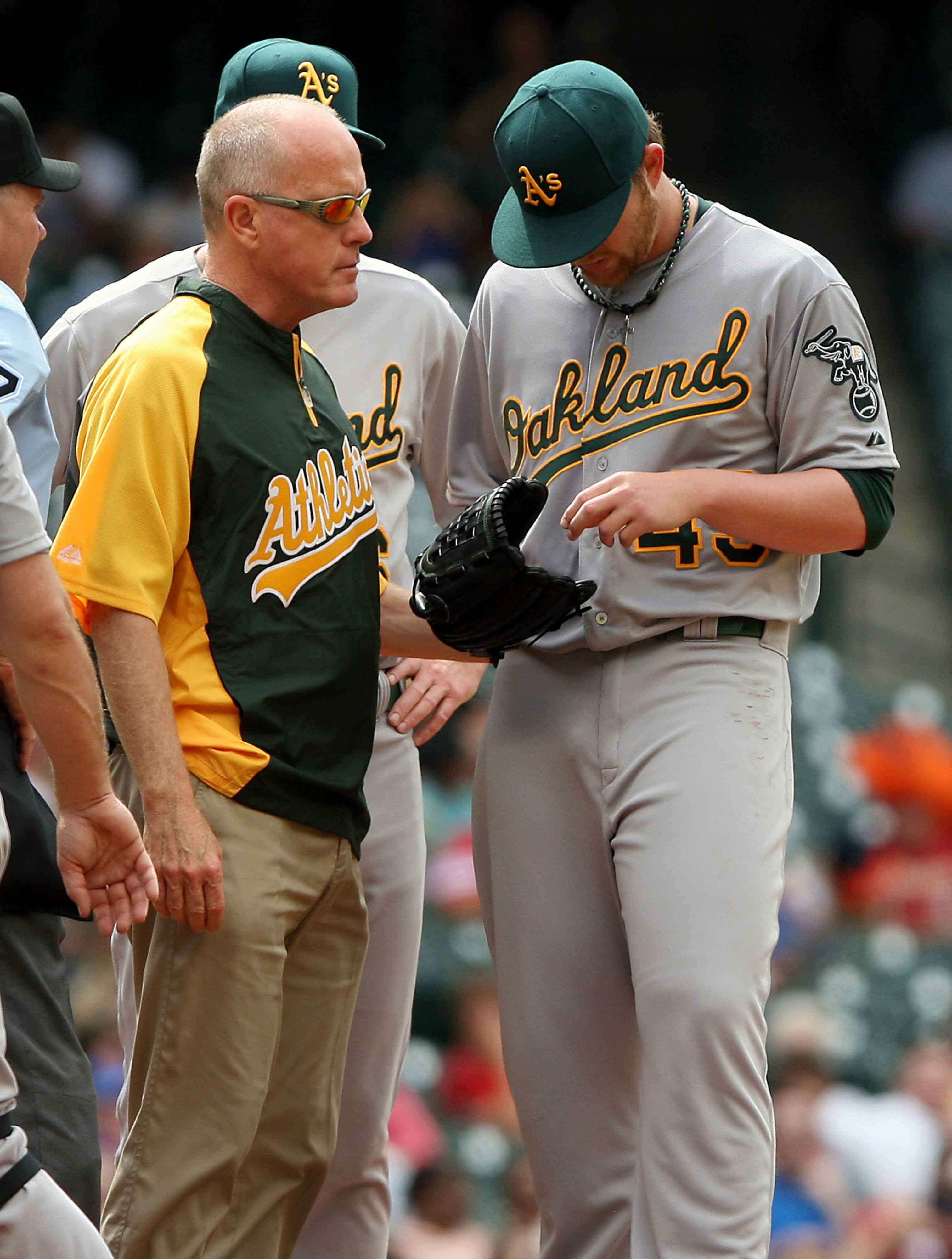 Starting pitcher Brett Anderson and outfielder Josh Reddick both received good news on their injuries, as both had negative X-rays. While both will be dinged up for the near-future, they should both be able to play without much interruption.

But it's different now. Anyone who watches him today, and who watched him before can see that he's a different pitcher. But, how different -- how has he changed over time? That's what we look at today.

One way to do this is to use pitch f/x data. The best site for this, in my opinion, is Brooks Baseball. Not only do they have PFX data updated in near real-time for every game, they also keep player cards for pitchers, allowing us to go back and see how Anderson has changed over time. One of the best ways to see how he has changed over time is to look at his velocity and pitch selection over his career. Specifically, we can compare his pre-surgery and relatively healthy pitching repertoire, his 2011 partially injured repertoire, and what he's throwing now post-surgery.

Here is his pitch selection table from 2009:

As you can see, he was basically a two-pitch pitcher. He had the big four-seam fastball, up to 98 at times, and a slider and that's about it. Yes, he technically threw a changeup, curveball, and two-seamer, but he only threw those pitches about 17% of the time total, leaving 50% four-seamers and 33% sliders. Not that he didn't enjoy success like this, though. His four-seamer was fouled off or swung through in about 42% and 11% of swings, respectively, and his slider was even better. When he threw it, batters missed 29% of the time or fouled it away 38% of the time. Those two pitches averaged 93.4 MPH, and his slider 84.3 MPH, for a respectable 9.1 MPH speed differential. Again, if it works, why change it.

In 2010, there was development of his tertiary pitches at the expense of fewer four-seam fastballs, but not sliders. He continued to throw sliders at nearly the same rate as before (31%), but upped his curves to around 10%, changes to 8%, and two-seamers to 9%. Indeed, while he was less valuable in total because he only made 17 starts that year, his FIP was lower than in years prior because his walk rate improved while his HR rate declined, despite his K-rate declining. In throwing fewer four-seamers, he allowed fewer HR on that pitch but sacrificed some of the whiff, going down to 10.2 from 11.4% whiffs per swing. The differential between his four-seamer and slider is 8.8

Here is where one can start to see that something is wrong. His four-seam velocity is off by 2 MPH on average, and up to 3 MPH from his earlier prime; for example, from the Boston game where he averaged nearly 95 MPH on his four-seamer. He went back to being a two-pitcher, except this time throwing 40% sliders and 30% four-seamers. While he was able to keep up the speed differential, throwing such a high number of sliders as a starter is probably unsustainable anyway. He went for Tommy John Surgery in July and began the rehab process shortly thereafter.

The one thing that stands out post-surgery is his use of the sinker. Instead of relying on the 93-94 MPH heat that he used to have consistently, he's worked in a sinker. He still breaks off the slider around 30% of the time, and indeed, it's still the pitch he goes to when he needs the strikeout over the sinker and four-seamer. But that sinker has become a part of his repertoire that simply wasn't there before, at least not to the extent that it is now. He still shies away from the curve and change, and uses the latter (like he did before) exclusively to right-handers. What's more, with the decreased velocity of his four-seamer and slider together, he's actually increased the speed differential slightly between those two pitches, making them around 10 MPH different. Even further, with the speed difference on his fastballs being fairly insignificant (but one with sinking action), hitters are essentially forced to guess between three pitches, two of which have virtually the same speed but end up in different locations.

The results of this are that he's been able to come back and pitch effectively, of course. But the sinker combined with the slider has turned him into a groundball machine. This is no joke: his groundball to flyball ratio has increased to over 3.5 since his return from surgery, whereas from 2009-2011 it increased from 1.49 to 1.94 to 2.32. Helped by a game against the Astros, of course, his K% is at 21.5% since surgery, and has never previously been that high, not even in 2009.

This is Brett Anderson today: remade, and potentially just as good. Only time will tell if he's able to sustain this effectiveness throughout what we hope is a full season of starts.