In case you missed the news yesterday, the A’s continued their flurry of minor leagues moves by claiming Vogt from the Tampa Bay Rays

Share All sharing options for: A Stephen Vogt Report

Here is the transaction:

The #Athletics have acquired C Stephen Vogt from the #Rays for a PTBNL or cash considerations; designated RHP Dan Otero for assignment.

Goodbye, Dan Otero; we hardly knew ye. He's had a rough go of it lately: pitching for the Giants last year and getting released on March 26th, and claimed by the Yankees. The day after, he was claimed by the A's, and today he's out of an MLB job again. Eeesh.

Hello, Stephen Vogt. No, not this guy (we hope), but this guy: 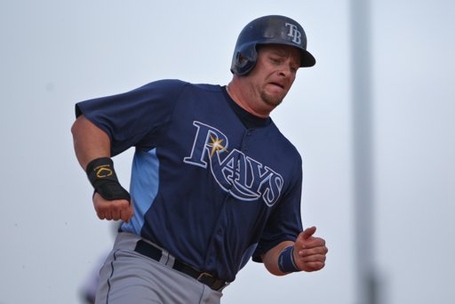 The first thought about him is that the A's do need some catching depth, and gave up pretty much nothing in order to do so. In the past calendar year, here are the names of the AAA/MLB catchers who are no longer in the organization:

And here are the catchers who the A's have acquired, one way or another at the AAA/MLB level

So, there was a need for catching. Indeed, it's the like the A's are playing musical catchers, too. But, based on what I've read, Vogt may be an A's style undervalued commodity. 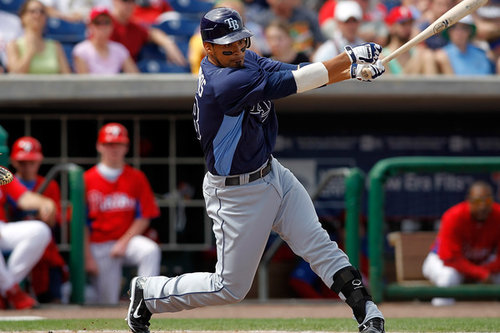 He's also got the Grant Green quality about him, for better or for worse, of being able to play multiple positions, plus catcher. He's a natural catcher, but can also play LF, RF, 1B, and 3B. If only Grant Green could catch, too, perhaps he'd be in the major leagues by now.

As others have noted, Vogt is also old for his level. He's 28 now, and this is probably around his prime time as a hitter. Indeed, no one has ever said he can't hit, and it's not really clear that he can't catch, either, having been able to throw out 30% or so of baserunners in 2011. So, what gives? Well, he did have a torn rotator cuff in 2009, the only season in which he did not play a full set of games, but he has rebounded well since then.

DRaysBay has summed him up nicely, twice:

EVERYONE I have talked to about Stephen Vogt - players, coaches, broadcasters - simply loves the guy.

I love him too. I can't for the life of me figure out why more analysts don't talk about him and the role he could play for the Rays in the very near future. He has hit at every level he has been at and although he isn't going to win any Gold Glove awards, has the positional flexibility that the Rays place a premium on.

In a later 2012 spring training piece:

The fact the organization has played him at catcher, left field, first base, and even right field a handful of times speaks to the point that they must like the bat and are trying to find the best use of it. The best use of it just may be as a reserve catcher that can fill in at other positions in a pinch if needed. He has thrown out 31 percent of the runners that tried to steal bases against him the last two seasons as well.

I'm really intrigued by this pickup for the A's, but even more intrigued why the Rays, a smart organization to be sure, would dump someone like him at his offensive prime. Sometimes, teams just don't have enough spots for all the players they would like to keep, and I'm thinking that might be it. Perhaps the A's saw that, and thought they had to jump on it, even if it meant DFAing Otero. In either case, I hope he at least gets a cup of coffee with the A's in September.