Today, the 8-8 Rangers face off against the 8-8 A's. Our mighty bearded heroes will battle for second place, as the Mariners are still leading the AL West pack with an 11-7 record. Were it not for a rain-shortened drubbing at the hands of the A's, this race would likely be a lot closer.

Before we do lineups, here are some links...

All-Beard Team: BLS picked the top MLB beards right now, and both Daric Barton and Josh Reddick made the cut. Personally, I think it's really a two-lumberjack race between Jayson Werth and Reddick. You gotta admit, Werth's is pretty gnarly: 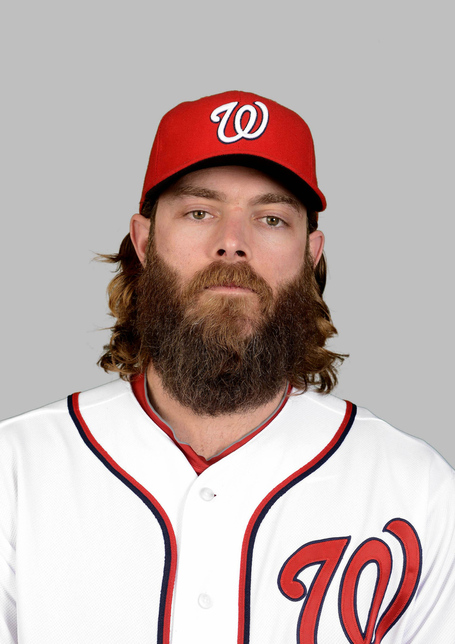 No word yet on who is hosting the upcoming MLB Network show "Top 10 MLB beards right now." Perhaps it should be Heidi Watney.

Happy Pi Day! The A's tweeted out this photo in the morning to celebrate. If any team can claim this day as their own, it's the A's. (Also, please post all pi(e) puns below).

Before she left the A's beat for a few days, Susan Slusser had a good story about Chris Young being that " good clubhouse guy" to replace the likes of Jonny Gomes and Brandon Inge.

Relatedly, if you missed it, Brandon McCarthy of all people talked about the importance of leadership/motivation in his interview with Nick Piecoro on Tuesday. Piecoro is a great Twitter follow if you want to read intelligent stuff about the Oakzona DiamondElephants. Here is a paragraph that really stood out to me:

But if you have a guy like Jonny Gomes or Brandon Inge or someone who just comes up and is just kind of (BS-ing) with you and it just sort of loosens you up and then everyone else can kind of get in the mix. I know it sounds really stupid, but it’s kind of like being an artist where the more comfortable you feel, usually your better work comes out. I think it’s guys that just put out a comfortable atmosphere and they bring guys in. It’s like that in real life, too, where you’re with a group of friends and there’s people that you wait for to get to the dinner party because after that everybody loosens up and it turns into a good time.

Makes sense, doesn't it? At least it comes from someone who has been in a clubhouse and can speak with some authority on this issue.

Finally, it looks like Fernando Rodriguez will need TJS. In case you've forgotten, Rodriguez was the throw-in to the A's in the Jed Lowrie deal. Let's face it: it wouldn't be the A's, and this wouldn't be an A's blog if we didn't have someone coming off of major surgery.

Here are the lineups, courtesy of Baseball Press:

As you may notice, their lineup is less Jurrickson Profar, as he travels to SF to play some Honkbal for Team Nederland. Gametime is at 1PM -- see you there!