Huge, huge trade news right before Spring Training for the A's (and their rival Astros)

UPDATE: On MLB.com, Hiroyuki Nakajima is decked out in the Astros uniform and background. Perhaps a something to come? - Zonis 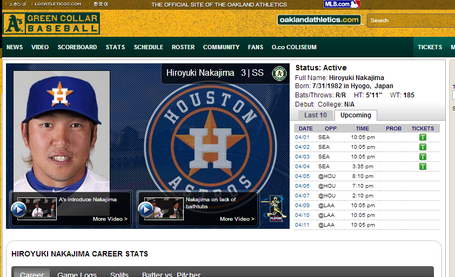 Well, here's one way to stop thinking about football.

The A's now have acquired Jed Lowrie to play shortstop (what about Nakajima?), but they literally give up the farm, losing both Stassi and Peacock in the deal. Chris Carter, who looked as if he would at least be a platoon player at first, is also gone.

I'm still honestly in shock about the trade, so expect much more analysis as more information rolls in.

If you're looking on the bright side:

So Astros got an A-ball catcher with arm problems, a AAA pitcher with control issues, and a journeyman for Lowrie? Not bad.