In light of tomorrow's Super Bowl, I figured it would be fun to remember how the greatest Oakland A of them all could've spurned the diamond for the gridiron. Thanks to his mother, he's a baseball Hall of Famer.

Share All sharing options for: When Rickey Henderson played football

We all know Rickey Henderson as the greatest ballplayer to put on an Oakland A's uniform, but before he went pro, he was actually quite a football player. We have his mother to thank for his decision to play baseball.

Rickey's love for football began at Bushrod Park in North Oakland. He was the new kid in town, as his family had just moved in from Arkansas. Rickey soon made some friends and took to the park to play pickup games of football. He was always one of the first to be picked, and even became Bushrod's athlete of the year, an award presented by the parks and recreation department.

"It all started at Bushrod," said Michael Hammock, the park's director in Henderson's youth. "Rickey blossomed at Bushrod. Oh, he could go, man. I remember a (flag) football game, he had seven, eight touchdowns before halftime. He was probably the best basketball player in the city at that age. If you had Rickey on your team, you'd beat anybody."

When he was a prep star for Oakland Tech, he rushed for more than 1,100 yards as a senior and made the all-city team both as a running back and a linebacker. Here's a photo of him in action. 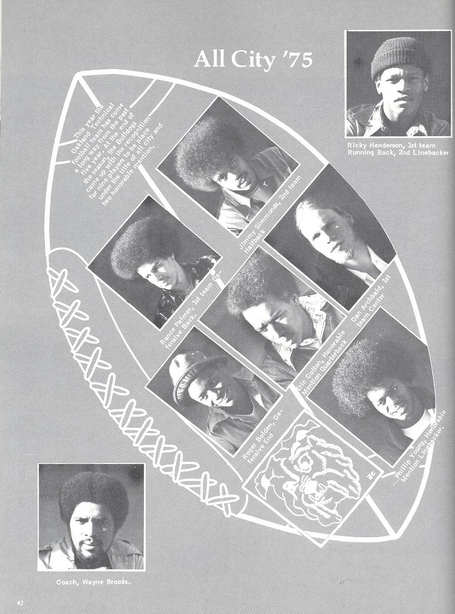 Apparently, he was so fast, his hair couldn't even grow out.

Rickey received more than a dozen scholarship offers, most of which were for football, and only a few for baseball. He wasn't sure if he should go into the baseball draft, work his way through minors, or go to college to play football. So Rickey left the decision to his mother, Bobbie Henderson.

However, as the Sacramento Press noted, Rickey really wanted to play football:

"I still, to this day, would have chosen football over baseball," said a smiling Henderson. "At that time, I was so involved with football that I wanted to play football. When I got drafted, my mom got talking about how she wanted me to play baseball and that's how I got to sign with the Oakland A's."

Rickey even said, as he was being inducted into baseball's hall of fame, that he always wanted to play in the Oakland Coliseum, but growing up he dreamed of wearing silver and black, not green and gold.