A Little Valentine's A's Love: Matches Made On Athletics Nation

So, did you know that Athletics Nation doubles as a dating site? Read the true story of two couples who met and married after meeting on AN as they speak out about their A's romances.

Share All sharing options for: A Little Valentine's A's Love: Matches Made On Athletics Nation

As long as we're getting all personal and stuff, I'll give you some background on my love life. You'll find this fun, and there are pictures. 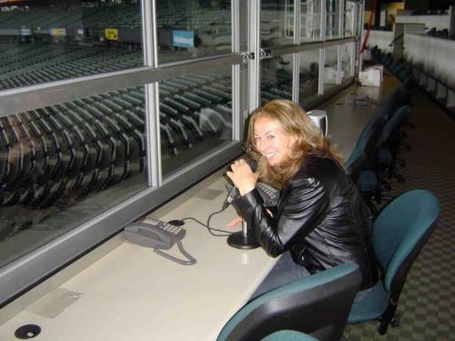 This article was published in 2006, three months before my 30th birthday, and ironically; just about the same time I met my future husband.

The initial warning shot of "What do you mean you’d rather stay home and watch the ballgame than go out to dinner?" was fired from my first serious boyfriend when I was all of 19 years old. In those primitive days before internet-ready cell phones and can’t-leave-home-without-it portable XM radio, I found myself frequently torn between spending time with my boyfriend and the other 25 men in my life — the ever-shifting A’s active roster.

However...I was still operating under the (apparently mistaken) notion that every man, no matter what sport he claims as his own, understands the basic idea of what happens during a game, and would certainly never turn off a baseball game in the bottom of the ninth inning with two men on base and one out, right?

The reason? "We’ve been watching this for three hours! It’s time to watch a movie."

I designated him for assignment the following day, and elected not to call up a replacement for the remainder of the season.

Lather, rinse, repeat for the next 10 years.

When people ask why I’m still single at three months before my 30th birthday, I tell them that I’m working within a small market. I then go home and complain to my Barry Zito bobblehead. He understands.

Believe it or not, despite growing up in Northern California, I had very few friends who rooted for the A's. Everyone I knew liked baseball well enough, but no one else claimed the A's as a reason for living favorite baseball team. My life changed the day I discovered Athletics Nation.

Dramatic? Maybe. True? Definitely. Gone were the days where I would watch the game on TV by myself, alone in my room, or at the Coliseum, alone in my seat, or with friends who attended the game more for the baseball experience than the baseball team. What took its place was a simple blog; nothing fancy, just a handful of users and plain text. But somehow through this basic medium, an entire world was created. It was here that I found a community of people who shared my passion for the Oakland A's, and this bonded us together in a way that growing up together, going to school together; shared hobbies; age, race, religion, and politics never could. I can say that I met the love of my life on an A's baseball website, but that's only half of the story. The truth is that I've met my best friends through Athletics Nation; friends all over the world and from all walks of life; people I would have never had the opportunity to meet otherwise. And more than nine years later, that number continues to climb, and so have the road trips, the weddings, the parties, and the love. So, here's wishing a Happy Valentine's Day to all my A's friends; may 2013 be the year we have all been waiting for.

I met my future husband, username OaktownPower, in a bar at an A's viewing party that I coordinated during the summer of 2006. The joke was that I tried to pay him back for the drink he bought me (true story). A story like this could happen anywhere, but despite the fact that both of us grew up in the Bay Area, we met in Hermosa Beach in Southern California, 400 miles away from the Oakland Coliseum. Strangely, there seems to be a lot of A's fans in SoCal, which makes parties here just that much more fun. (Let's talk about Opening Day in another post, shall we?)

OaktownPower emailed once or twice after the event, but after a particularly heartbreaking loss late in the summer in the playoff-run season of 2006, we found ourselves chatting online deep into the night on AN. I emailed him the next day to continue our conversation, and the rest, as they say, is history. After the A's were knocked out of the playoffs (on my 30th birthday, no less), OaktownPower asked me out. Our first date was the first game of the World Series, seven years ago.

We somehow managed to keep our relationship off the site until the engagement, when we granted BlogFather Blez permission to publish our engagement story. My amazing A's friends--whom I'm not sure I ever thanked enough--threw us a tailgate shower in the A's parking lot, complete with a celebratory cake: 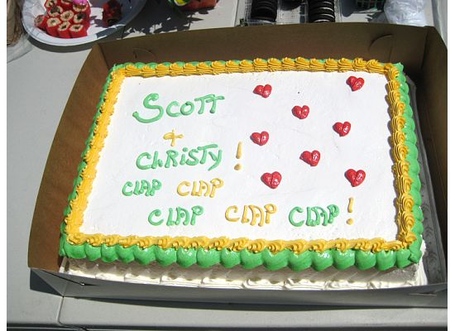 We eloped in September of 2010, the morning after attending an A's game in Oakland. We've been married over two years now, and finally had our first A's playoff run together last season.

It was at this same tailgate, celebrating baseballgirl & OaktownPower’s engagement, that I first met ChickenStanley in person. Mind you, we knew each other already, through our presence in the lounge and game threads, but we hadn’t actually met before. This was his first AN tailgate, and I was coordinating the tickets, so he had to find me before the game.

Fast forward some time, and you’ll see that my social circle is comprised mostly of friends from AN. Chickie and I, living all of twelve minutes apart (well, fifteen if there’s a train going by), would see each other frequently at tailgates, pie mobs, social gatherings, and pie mobs. (Did I say that twice? We like pie…) We also had become good internet friends through AN, facebook, and twitter following.

On the night of the season premiere of Mad Men, I saw Chickie tweet around 8pm about that night’s episode, which I wouldn’t see until 10pm. I think I said something along the lines of "Dude, you have an east coast access and you don’t offer to share with your neighbor?!?!? WTF??" And thus, an invite to come over and watch the following week was demanded.

Now, I’m comfortable with my baseball friends. When I got there, and there was a space on the couch, and a space on the much-better-to-see-the-tv-from bed, I just jumped right up onto the bed and made myself comfy (he even had a plate of cookies!!). Chickie of course sat on the far opposite side of the bed, probably afraid that I was going to hurt him, or worse, "friend-zone" him. Each week, I sat a little closer to the middle, he scooted a little further to the edge, until he finally realized that maybe he could move towards the middle of the bed instead. And so it’s Don Draper that we owe our thanks to for getting us together as a couple.

Moving to the present time, we live together, yell at the same tv shows together (THANK GOODNESS JOSIE IS GONE!), often log in to a variety of websites from feet away from each other, laugh a lot (sometimes together, sometimes at each other), and are busy planning our wedding (which is next month, so as not to disrupt the flow of the Regular Season, which was agreed by both of us as essential).