This week we turn to John Jaso - Oakland's Catcher/DH/1B(?).

Unfortunately John Jaso's first season in Oakland was cut short due to injury. But let's look back and project for 2014.

Below are Jaso's season stats. Things to like are the BB% and the OBP. Of players with at least 240 PA, Jaso's BB% is 5th best. That nice.

Part of Jaso's success in getting walks is that he is patient with two strikes. Since 2011 (that's all the 2-strike tool allows me to look at), Jaso has been very good at only swinging at strikes.

One interesting note about Jaso's 2013 was in variation in his spray chart. See below.

We see he shifted some of his centerfield contact to leftfield with good results. His pull power took a dive however. (Remember, hitting to all fields is HARD.)

Jaso's season was cut short on July 24th when he took a foul ball off the mask in Houston (two Athletics injured in the same ballpark.) We don't know how much if any catching he will be doing going forward, so if he shifts to first base his  injury risk will go down.

Eric Sogard eeked out Jaso in the feat of lowest ISO on the A's by a mere .003. Jaso only hit 3 home runs, zero at the Coliseum.  Part of his power outage is his numbers on pulled contact was terrible. Out of 337 players with 60 or more contacts to their pull side, Jaso's wOBA was 306th.

Let’s take a look at Jaso’s swing. We know that he switched his stance to a more upright, open look sometime after the start of the season. Below are two swings comparing the two (old on left, new on right).

As a side note, I am record that a hitter’s stance is entirely over-coached. A lot of people believe a closed stance means you can’t get your hands inside, and vice versa. What’s not as nearly as important as the stance is the position the hitter is in as they finish the stride. See below. Jaso achieves nearly identical foot plant position in both swings but from different starting points. I say whatever stance allows the hitter to get to a good, consistent foot plant position is fine. (Which seems to go along with the many stance variations you see in successful hitters.) You hear a lot how a hitter changes his stance to try to improve, but the real swing issue is more than likely unrelated to the stance.

Regardless of how Jaso gets to foot plant position, we can start to see why he might not hit for a lot power. In both swings, he doesn’t have much bend at the hips, meaning his legs won’t be allowed to do much work (I had the same problem with Grant Green). Also, Jaso has nearly zero internal rotation of the front side. While this can be overdone, it would be nice to see a little shoulder and leg turn to setup a bigger movement and add some loft to his swing plane. Compare him to Donaldson, who achieves a more athletic, powerful position. (From a technical standpoint, I like the position he achieves in old swing just a little better. Just a fraction more hip bend.)

From there, we can see Jaso's bat launch is a little muted, at least compared to Donaldson. Jaso just isn't in optimal position to get the bat moving quickly. See how Donaldson's front leg and shoulder start to open, almost like he has awesome front side mechanics.

From the side, we see that Jaso has a pretty short swing path, probably a little too short. Jaso doesn’t get his rear elbow to the height of his top hand or use his rear shoulder much. If I had to describe his swing in one word it would be cute. Nothing fancy, nothing awful, but more could be done get a little more power.

I will say that considering his swing, I think Jaso has the correct approach by not trying to hit for power.

Even if Jaso wasn't coming off an injury, I would have concerns for Jaso in 2014. For 2013, Jaso was basically a one-trick pony with a high walk-rate and not much else. Part of that walk rate was a strong 4.26 P/PA, which had he qualified would have been good for 4th in MLB. Remember, P/PA correlates to walk-rate fairly well. 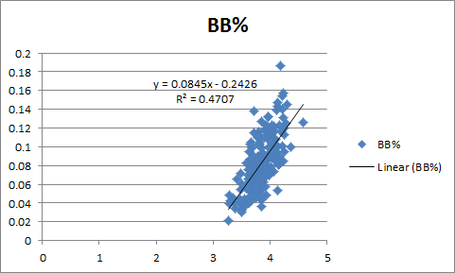 The problem is the leaders of P/PA are guys you don't want to pitch to, names like Mike Napoli, Carlos Santana, Adum Dunn, Joe Mauer, Jayson Worth, and Jose Bautista (1-6 on the list). Jaso is a nice batter, but he definitely doesn't scare you like those guys (remember the ISO). I worry teams with half a brain will notice this and just start throwing him strikes and not letting him take walks. But then again, Jaso has averaged 4.07 P/PA for his career, so teams haven't caught on yet.

Now for what he does when he swings the bat. Jaso's 2013 .271 AVE is higher than his career average of .258. Factor in a healthy .331 BABIP, one could wonder if he can keep that AVE up, especially in the Coliseum. However, he has posted a line-drive rate of around 25% the last two seasons, so that should help keep the AVE above .250. I simply don't see the power changing much. His career ISO is .130, his swing doesn't promote much power, and Jaso seems to be shifting more toward an opposite field hitter (typically low power). So I will go with a .262 AVE and a .377 SLG. So it will be up to Jaso to keep the walk-rate up to maintain value. If not, the A's will have two Daric Bartons on their hands.