Nate Freiman was an interesting Rule 5 pickup by Beane and Co. before the season started. Let's look at his 2013 season and project into 2014.

After spending four seasons in the minors, 2013 was Freiman's first in the bigs. Below are his season stats.

One interesting thing to note is the ISO. The A's were probably intrigued by his minors' power numbers, but it hasn't shown so far in his first season in Oakland.

Now, it is probably too much to ask someone to keep sluggling like they did in AA, but is kinda interesting the AVG and OBP stayed somewhat consistent and the SLG dropped significantly, specifically the HR-rate. Freiman's HR and flyball distance was a pretty meager 275.5', good for 195th in the league (just behind Ben Zobrist and ahead of Michael Bourn).  These numbers haven't been shown to correlate to anything predictive, but it might be an indicator as to the available power in Freiman's bat.

Freiman showed a pretty drastic RHP/LHP split, though in limited sample size. Considering the options at DH/1B, I don't imagine Freiman getting many PA against RHP. (Of course, one of Freiman's few hits against RHP was a game winner against the Yankees.)

That's right, Freiman got nothing but singles against RHP. Against LHP, Freiman was more than respectable.

Freiman likes to spray the ball around the park, with decent success.

I am not sure he can maintain that opposite field number. Freiman's ISO to opposite was only .044, meaning he doesn't have much oppo-boppo. Maybe he is the right-handed, taller, thinner, whiter Tony Gwynn and can make it work, but I have my doubts.

Consistency - Freiman's season was about as up and down as you can get.

I realize month markers are somewhat arbitrary and subject to sample size (although Freiman received nearly equal PA in each month), but jeez. Freiman basically had a terrible year buoyed by a couple of hot stretches.

Power - As mentioned, Freiman didn't display a lot of power, especially HR. Considering he has 250 lbs. moving the bat and power is probably the reason the A's picked him up, it would be nice to see some more pop.

Hit RHP - Not really a concern for the 2014 A's, but if he wants to become an everyday player he is going to have to hit RHP.

Let me start this by saying I am not going to give Freiman much slack for being tall. Kris Bryant is 6' 5" and doesn't swing like Freiman. Freiman ran track in high school so he has some coordination. Dirk Nowitzki can shoot the J like nobody's business at 7'. Differences in height are reduced somewhat do to the magnitude of hip bend in hitting (an 8" height difference becomes roughly 5.5" difference). So Freiman's getting critiqued just like everyone else, maybe more so thanks to his 250 lbs.

Let's take a look at some of his swings. Here is Freiman hitting a homerun on a fastball belt high.

Now from the side.

Here is another home run, this one a knee high pitch.

In short (ha-ha), Freiman's rear function is not good. From the front side, notice how flat Freiman's bat is as he starts his swing. The barrel is nearly on his rear shoulder. His rear elbow is way too low, and he launches the bat with his arms, bypassing the rear shoulder and upper back. If you are a golfer, Freiman's swing is similar to an over-the-top movement. Freiman's swing is flat from the pitcher's perspective, but steep from the dugout view. The result is a bat path that is not very forgiving. (For more info on one of my major swing grading aspects, read this.)

Let's compare Freiman's swing to Donaldson's. Here are two swings, both on knee high, inside fastballs. See how steep Freiman's swing is? His barrel is above his hands, which are below his rear elbow.

Even on a belt high pitch, Freiman still has a very steep path. He gets his hands way out in front of his body.

While I don't focus on the follow-through as much as most people, an arms driven swing results in some funky looking finishes. 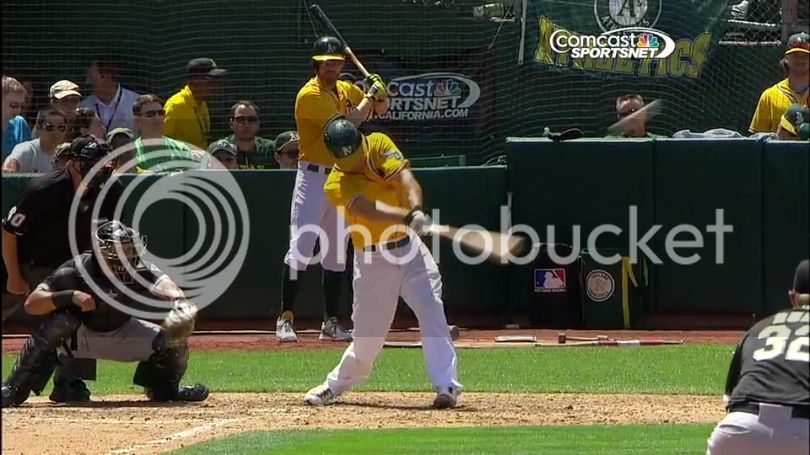 Interestingly, Freiman is swing just like a lot of people teach. He is "throwing the rear hand" and "taking the knob to the ball" and "swinging down on the ball" and so on. Problem is, elite hitters don't swing like that.

Let's just say I am not counting on Freiman to carry the team in 2014. Considering his position and hitting spit, I don't see Freiman getting a lot of PA next year. Frankly, I would rather see Collaspo get the spare RH at-bats than Freiman. Or even Michael Taylor. That's right, I said Michael Taylor. I would like to see once-and-for-all that Taylor can't pull a Domonic Brown.