Share All sharing options for: Breaking News: NOTHING HAPPENS!

In a bold move typical of the unpredictability of Billy Beane, the A's stayed exactly the same in a 3-team non-trade involving the Kansas City Royals and Pittsburgh Pirates.

According to an executive, who asked to remain anonymous because the deal has not been finalized pending physicals, the Royals will receive no players, the Pirates get no cash, and the A's receive a player never to be named now or later.

It is unclear how the Texas Rangers will respond to this blockbuster non-move by the A's. Will this turn the heat up on Texas to go out and stay exactly the same in order to keep pace? Or will they perhaps work a 3-team deal of their own in which they reacquire exactly the same player they trade in exchange for precisely the player they acquire?

Such is the nature of news on December 1st. However, there is some actual news if you can wait 3 days. (And you have no choice.) My interview with Ken Korach, a 45-minute extravaganza, will run in 3 parts on each of the next 3 Wednesdays. So look forward to Part I on Wednesday, as Ken discusses his recently released book "Holy Toledo: Lessons From Bill King, Renaissance Man of the Mic," and offers some personal insight into Bill King the person, the broadcaster, and the Bay Area icon.

Did you know that "icon" is an anagram of "Nico"? Well now you do.

Enjoy this Sunday's original cartoon and feel free to discuss the impact you feel today's trade will make on my choice of dinners this evening. I'm thinking chicken, but only because I'm kind of in a fowl mood. Speaking of birds... 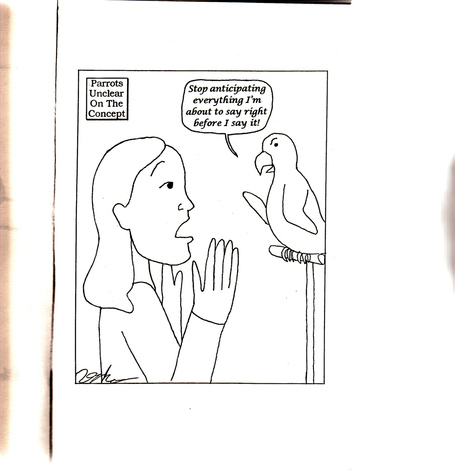